Like A Pro: Ranking The 2020 Toyota TRD Pro Models Off-Road 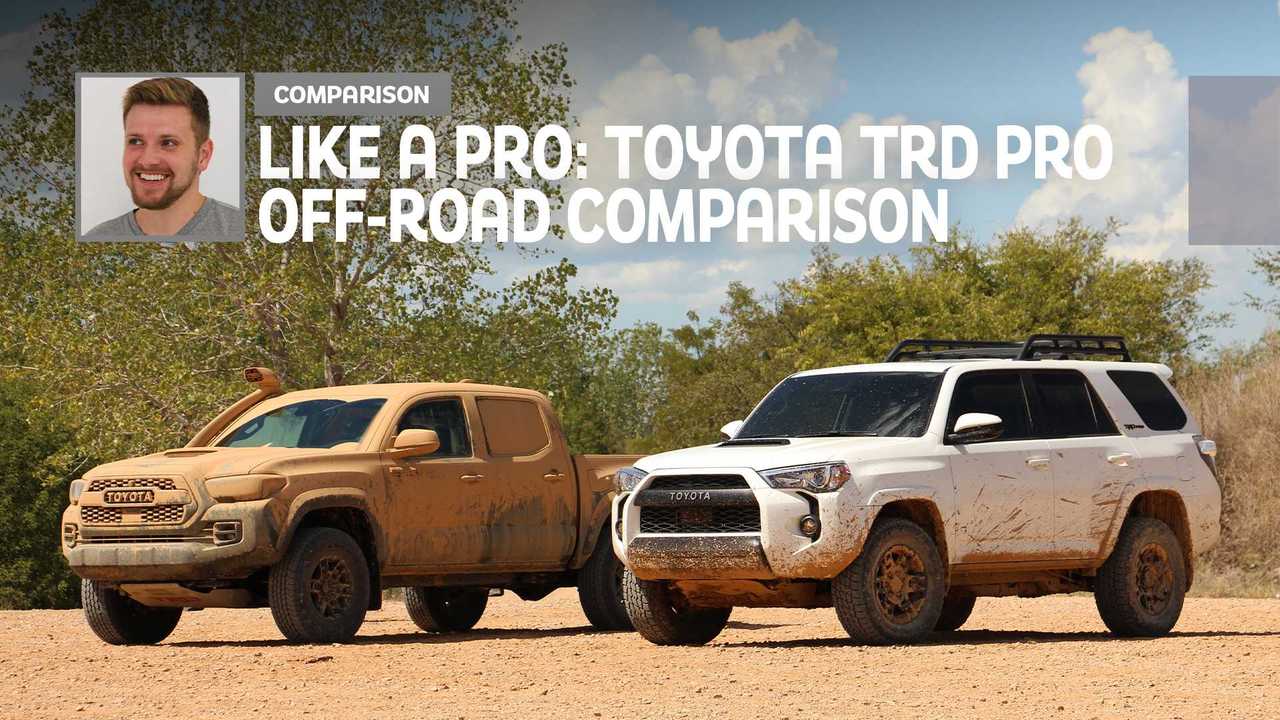 These four Toyotas are extremely capable – but which one is best on the trail?

Toyota Racing Development, or TRD, has been race-prepping cars, trucks, and SUVs from Japan’s largest automaker since 1979. In more recent history, and as it prepares to celebrate its 40th anniversary, its focus in the U.S. is on rugged body-on-frame, off-road-ready, TRD Pro variants of the Tacoma, Tundra, 4Runner, and Sequoia.

Every TRD Pro is tougher, and each offers new shocks, tires, and skid plates standard that make these models exceptionally capable on any trail. But in a recent test, we found out which of the four TRD Pro vehicles is toughest. The Northwest OHV Park near Dallas, Texas, is our proving ground, and at our disposal are the 4Runner, Tacoma, Tundra, and new Sequoia TRD Pro.

The course itself has four different off-road trails to choose from. The most-intense option is the red trail, while green, purple, and blue follow suit. Here’s how each one breaks down individually:

After climbing several hills, multiple high-speed runs, and a few mud baths, we’re convinced which  Toyota TRD Pro product is the best out of the extremely capable bunch. See if you agree.

The Sequoia TRD Pro lacks two key features, which puts an immediate blemish on its resume: Crawl Control and Multi-Terrain Select. And in part because of that, Toyota limits us exclusively to the Green, Purple, or Blue trails in the three-row, while giving the Tacoma and 4Runner exclusive access to the more-advanced Red trail. That said, there are still plenty of rugged options that make the Sequoia TRD Pro a solid option for the avid off-road enthusiast.

The Sequoia has beefy 2.5-inch Fox shocks, a front skid plate, running boards, and grippy Michelin (P275/65 R18) tires. It also offers 10.0 inches of ground clearance (second best to the Tundra) and, including a 27-degree approach and a 21-degree departure angle. The Sequoia's 5.7-liter V8 with 381 horsepower is adequate, and the accelerator pedal’s response is fluid on inclines.

But it's the sheer size of the Sequoia that holds it  back. This big SUV tips the scales at 5,985 pounds and measures in at 19-feet long and 6.7-feet wide. At that size, it makes it difficult to navigate the tighter sections of the trails tested, and just feels less refined than any of the alternatives. That's why it sits at fourth in our rankings.

Even though it shares its platform with the Sequoia, and virtually all of the same off-road components (Fox shocks, skid plates, off-road tires, etc), the Tundra TRD Pro feels like the better option on the trail. On the specs sheet, at least, the Tundra has the best approach angle of any TRD Pro model at 31 degrees. It also sits 10.6 inches off the ground (versus the Sequoia's 10.0 inches).

Both the Tundra and Sequoia are equally long (19.0 feet) and wide (6.7 feet), though, which makes them hard to navigate on tighter courses. Also, both vehicles use the same adequate 5.7-liter V8 with 381 horsepower, and both lack Crawl Control and Multi-Terrain Select settings like the 4Runner and Tacoma.

But the Tundra feels more agile than three-row SUV (or at least, as agile as a full-size truck can be), giving it more eagerness to crawl up steep inclines. Of course, 5,640 pounds isn't what we'd call "light," but the Tundra carries more than 200 pounds less mass than the Sequoia (5,985 pounds), which gives the full-size truck a slight edge over its three-row sibling.

Even though it's one of the oldest trucks in its class, the Toyota Tacoma TRD Pro proves it's still plenty capable off-road, especially with the upgrades it gets for 2020. All of the same rugged cues from last year’s model carry over: Fox shocks, skid plates, a two-speed transfer case, etc. But the larger 8.0-inch infotainment screen of the updated truck makes the range-exclusive low-speed trail camera easier to view, and the standard snorkel now provides better airflow to the engine when fording deeper water.

The Tacoma's 3.5-liter V6 is punchy, and the engine's 278 horses best the 4Runner’s 270 hp. But the Taco's 265 pound-feet of torque feels like not enough to propel the stout pickup off the line with genuine force, and the throttle isn't as easy to modulate, either – it takes some finessing. The six-speed automatic is inoffensive, if not a bit sluggish on road, but holds its gear well enough on the trail and engages smoothly from a standstill. But Toyota gets brownie points for still offering a six-speed manual. This is one of the few trucks in the class that still does.

Even though it's one of the oldest trucks in its class, the Toyota Tacoma TRD Pro proves it's still plenty capable off-road.

With a 35.0-degree approach angle and 9.4 inches of ground clearance (better than trucks like the Colorado ZR2 [8.9 inches] and Ford Ranger [8.4 inches]), the Tacoma TRD Pro takes on vertical slopes with ease. The Trail Control feature – available exclusively on the Tacoma and 4Runner – leads the truck uphill and downhill with ease. Think of it as cruise control for off-roading.

But the Tacoma scrapes its trailer hitch often at exit. It also occasionally drags its running boards on larger rocks. That, along with its added length (17.7 feet) versus the more compact 4Runner, puts it at a close second on our list.

The 4Runner TRD Pro is the best of the TRD Pro breed. It uses pretty much all of the same equipment as the rugged Tacoma, including Crawl Control, Multi-Terrain Select, Fox shocks, skid plates, and a locking rear diff, among others. With 270 horsepower from its 4.0-liter V6, the 4Runner is technically the least powerful of the bunch, but the mid-size SUV’s just right dimensions give it the edge in this group.

Short front and rear overhangs are key to the 4Runner's success. Its relatively stout 15.9-foot length (next to the rest of the TRD Pro range) make the 4Runner the most compact of the group, affording it 9.6 inches of ground clearance and a best-in-range 26-degree departure angle. The 17.7-foot Tacoma, with its 9.4 inches of ground clearance and 23.9-degree departure angle, feels like a behemoth by comparison.

The 4Runner TRD Pro is the best of the TRD Pro breed.

The 4Runner happily dances over the red trail's jagged boulders and steep inclines without breaking a sweat. The same can't be said about the Tacoma. The SUV's tidier exiting abilities and better 9.6-inch ground clearance make it better at tackling tougher obstacles than its pickup counterpart.

The 4Runner's 278 pound-feet of torque (better than the Tacoma) and old-school five-speed automatic and short gear ratios, meanwhile, give it an abundance of low-end torque. The SUV's responsive throttle makes it easy to modulate and utilize the engine’s power while climbing over rocks, and its steering feel is great, too. There's little to no guessing on the trail, just instant feedback from the tires to the driver's fingertips.

If we had to nitpick, the 4Runner TRD Pro's 2020 improvements are barely noticeable – especially when factoring in the $3,000 increase over the 2019 model. The 8.0-inch infotainment screen and the addition of Toyota Safety Sense P (automatic emergency braking, lane departure warning, automatic high beams, and adaptive cruise control) standard throughout the range are the only significant improvements of note. And there's still no trail camera, which the second-place Tacoma TRD Pro does offer. But, even with little new, the 4Runner TRD Pro is still one of the best off-roaders Toyota has to offer.