It’s always been spacious and imposing, but the Cadillac Escalade never seemed terribly high-tech. The acres of leather and broad swaths of chrome felt like lipstick on a Chevrolet Tahoe, with few substantive improvements. That changes with the 2021 Cadillac Escalade, which gets industry-leading Enhanced Super Cruise driver-assist technology and phenomenal interior connectivity that rivals even the most forward-thinking luxury brands.

I recently had the opportunity to take a 2021 Escalade home overnight, and since some of my colleagues have already spent time in the flagship Caddy, I spent most of my time behind the wheel sampling its newest and most advanced features. While its predecessors may have been icons of pastiche over panache, the new Escalade is a world-class luxury SUV that leads the way in several key areas while still offering a distinctly American take on premium motoring.

Paving The Road To The Future

The primary headline here is that the 2021 Escalade now boasts Cadillac’s Enhanced Super Cruise technology as an option, building on the suite of semi-autonomous features that first appeared in the late, lamented CT6 luxury sedan. Enhanced Super Cruise is capable of hands-off driving on limited-access roads (like its predecessor), but software improvements and more advanced vehicle hardware bring functionality to 200,000 total miles of freeways and divided highways in the US and Canada. The second-generation system now offers on-demand automatic lane changes, as well.

In practice, the system is simple to operate. Once it detects a compatible road via precision lidar map data and the onboard navigation system, a small steering wheel icon in the instrument cluster will turn blue. The driver can then activate Super Cruise via a button on the cruise control panel. A strip of lights on the steering wheel illuminate in blue as the system prepares to take over, and once they turn green, the driver can remove hands from the wheel. If it encounters a roadway that hasn’t yet been mapped, it warns the driver (usually with enough notice) to take over via red flashing steering wheel lights. 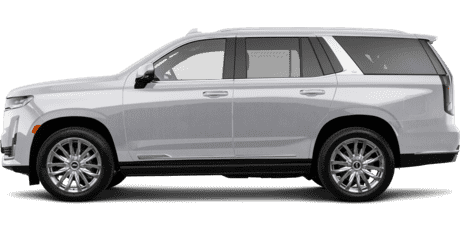 Enhanced Super Cruise also features automated lane changes. Hitting the turn signal stalk initiates the process, at which point the system scans the adjacent lane for traffic. It’s also advanced enough to identify fast-approaching traffic from behind to prevent cutting other vehicles off, and it looks forward as well to prevent tailgating. If the lane is clear, the Escalade will safely move over, automatically canceling the turn signal once the process is over. An indicator in the gauge display keeps the driver abreast of the process, which works about as quickly as any other manual lane change.

Like similar systems, Super Cruise isn’t a fully autonomous feature, but a driver’s aid. Infrared cameras monitor the driver’s eye movement, and if they detect distraction, the system indicator lights will flash to call attention back to the road. If the driver doesn’t respond (as during a medical emergency, perhaps), Super Cruise escalates through a series of take-over alerts – seat vibration, warning chimes, gauge cluster messages, and a vocal prompt through the speakers – before bringing the Cadillac to a gradual stop in the lane, activating the hazard lights, and initiating an OnStar emergency call.

Although Super Cruise works faultlessly 95 percent of the time, it would still behoove the driver to keep their attention forward and hands close to the wheel.

Unfortunately, the system isn’t totally foolproof. Like our most recent encounter with the CT6, Super Cruise occasionally deactivated rather suddenly, demanding I take over upon encountering an apparently unmapped lane shift on the freeway. I anticipated this and was able to keep the Escalade centered properly, but it was still somewhat unsettling. Although Super Cruise works faultlessly 95 percent of the time, it would still behoove the driver to keep their attention forward and hands close to the wheel. What's more, ticking the Super Cruise option box only activates it for three years; it's a subscription feature after that.

Given Managing Editor Brandon Turkus’ glowing first drive review versus my preconceived notions that the ‘Slade was too big and too crude for a truly luxe product, I wasn’t sure what to expect of my first experience. But the 2021 model is far more polished and poised than its predecessors (a ground-up redesign can have that effect), thanks in part to a completely distinct interior relative to its cousins, the Tahoe and GMC Yukon.

My Platinum tester’s rich Whisper Beige interior – I love those unconventionally luxurious fabric accents – features plenty of impressive technology aside from Super Cruise. The Escalade’s 16.9-inch infotainment screen features rich, high-definition graphics and responds to touch inputs very well (the pinch-to-zoom navigation function in particular). While I normally use Apple CarPlay to navigate, the massive, detailed map display was more appealing than Google or Waze, and it seemed to route around traffic snarls with equal accuracy. Wireless device charging, Apple CarPlay, and Android Auto are standard.

Directly in front of the driver is another OLED display, this one measuring 14.2 inches. It offers the usual accouterments, including an analog-style speedometer, tachometer bar graph, and secondary gauges, plus readouts for fuel economy, maintenance status, and more. But it also converts to a giant augmented-reality display, if desired, superimposing navigation instructions onto a live feed of the road ahead. Pedestrian- and animal-detecting night vision, which Cadillac actually pioneered on the 2000 Deville, is another display option; ditto a full-screen map.

A third screen, the smallish 7.2-inch display left of the gauge cluster, serves as a digital trip odometer with average fuel economy data. It also adjusts settings for the head-up display and primary instruments. Between the three screens, the driver is spoiled for data, although the initial task of putting which information where is a little daunting. What’s more, it’s not very easy to adjust the reconfigurable instrument cluster on the fly. Back on the positive side of the ledger, the OLED screens reduce eye strain at night without sacrificing brightness, crisp details, or rich colors.

It’s clear that Cadillac put its best foot forward on the 2021 Escalade. Its impeccably constructed interior, air-suspended magnetorheological shocks, and massive amounts of space make it feel peerless and unruffled on the road, with well-integrated features flexing GM’s technological muscle. Though still a V8-powered, body-on-frame SUV (an efficient diesel is optional), the Cadillac Escalade is finally a forward-looking flagship for the brand.