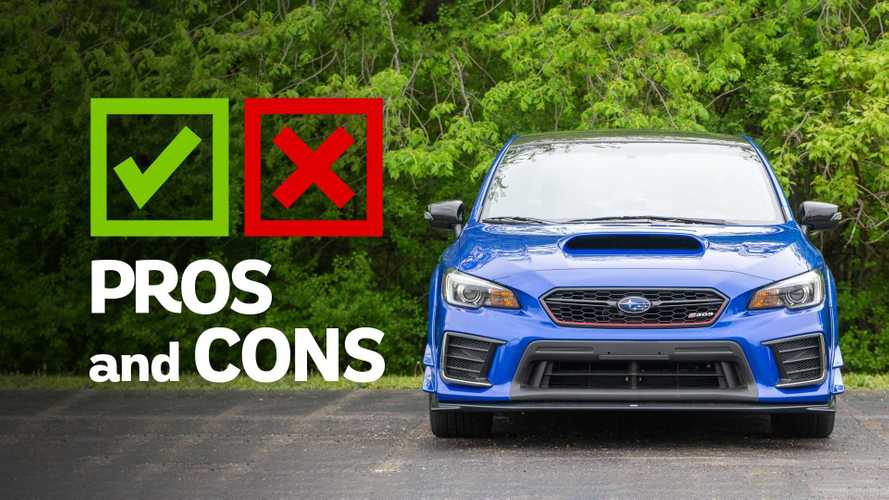 If there's one thing we know about automakers, it's that they like to send their most revered products out with a bang. That could be something as simple as a fresh coat of paint or new wheels, to a whole special edition with all the bells and whistles. Or if you're Subaru, and preparing to wave goodbye to the current WRX and STI, that means a limited run of hand-assembled, purpose-built variants. Meet the STI S209.

Technically a product of Subaru Technica International (that's what STI stands for), the S209 isn't actually a Subaru, despite the Pleiades badge at both ends of the body. Thanks in large part to the fettling done by the company's in-house motorsports division, the STI S209 is its own distinct thing… in theory.

In practice, it feels like the most exclusive version of a very familiar car. The S209 is unquestionably sharper, more dynamic, and more interesting, but like so many swan songs, we've plumbed these depths pretty thoroughly, and making them a little deeper only goes so far. Ultimately, the S209 struggles to justify its astronomical price tag – a result no doubt of its hand-built construction – in the sort of conditions most drivers use their vehicles. For Subaru's most devout fans, though, the S209's performance, styling, and rarity are as gasp-inducing as its $64,880 asking price.

The standard Subaru STI is not an attractive car, and neither is the S209. But this limited-edition model unquestionably has presence and visual punch, from its enormous carbon-fiber rear wing to the tweaked fenders and fascias. Even a layman will be able to tell that this car means business.

We're particularly fond of the small side grilles on the front fenders and of the subtle dive planes on the front fascia, although we do wish our tester carried the STI line's iconic gold BBS wheels. They're a natural match for the WR Blue paint, but for reasons we can't begin to comprehend, Subaru is limiting the flashy alloys to the S209’s only other paint option, Crystal White paint – blue cars get grey BBS rollers, instead.

What's the “209” in S209 stand for? Well, the first STI-built car wore S201, and there have been seven cars from the in-house motorsports group since then – do the math. But beyond a simple designation, “209” is also an indication of just how many (or how few) examples Subaru is bringing to North America. That's good news if you want to be the only Subaru loyalist in town rocking this ultra-exclusive sedan – the bewinged S209 is rarer than your average Ferrari or Lamborghini, and that's certainly a Pro.

The standard STI's turbocharged 2.5-liter flat-four produces an ample 310 horsepower and 290 pound-feet of torque. The S209 adds 31 hp and 40 lb-ft to that figure, making for far brisker straight-line performance. Sure, this car still suffers from some of the usual Subaru ills – the six-speed manual transmission is notchy and unlikable, and if we had our way, we'd crank the exhaust's volume up a couple ticks – but it's unquestionably the quickest factory Subaru ever.

Acceleration is relentless, with the reworked 2.5-liter making good use of the HKS-sourced turbocharger's added boost (18.9 psi, compared to 16.2 in the base STI). And unlike the standard car, power doesn't really fall off as the engine approaches redline – this is a flat-four that's happy in the rev range's upper reaches.

It's a $65,000 Subaru. Yes it's exclusive and fast and cool to look at, but $65,000 buys an awful lot of performance and comfort – a Mercedes-AMG C63 is just $3,100 north of the S209. And while the Subaru might make a case for its exorbitant price on the track, it's hard to get excited in everyday conditions.

You get some STI logos and new upholstery on the seats and steering wheel – the latter item wears suede-like fabric, but the chairs themselves are the same unlikable Recaros featured elsewhere in the Subaru lineup. There's a red strip of plastic that spans the width of the dash, too. Overall it's hard to spot the effect of the S209's $28,000 premium over the standard STI in the cabin.

Doesn't Feel All That Different Everyday

STI made some significant changes to the S209's chassis and brakes – high-friction pads for the Brembo stoppers, exclusive Dunlop rubber, revised rates for the Bilstein dampers, stiffer springs, and awesome strut tower bars are among the headliners. Stick it on a skid pad, and the S209 will pull one G thanks to these enhancements. And none of that matters unless you're regularly visiting the track. Aside from the added power, the S209 feels too much like the standard car on public roads. That said, this is far from the only track special to suffer from that particular ill.

Rarity is only a pro if you happen to be an early adopter. In the case of the 209-car run, you're unlikely to find one for sale as new (or at least not a new one for the MSRP). Sorry folks, but you should have taken our advice from the car's first drive last year and sprinted to your local dealer with a check in hand. That said, a quick look at AutoTrader does show a number of ultra-low-mileage S209s for sale – there's one with 3,400 miles and $9,000 off the starting price, and another that's basically a demo car, with 225 miles and the original price.