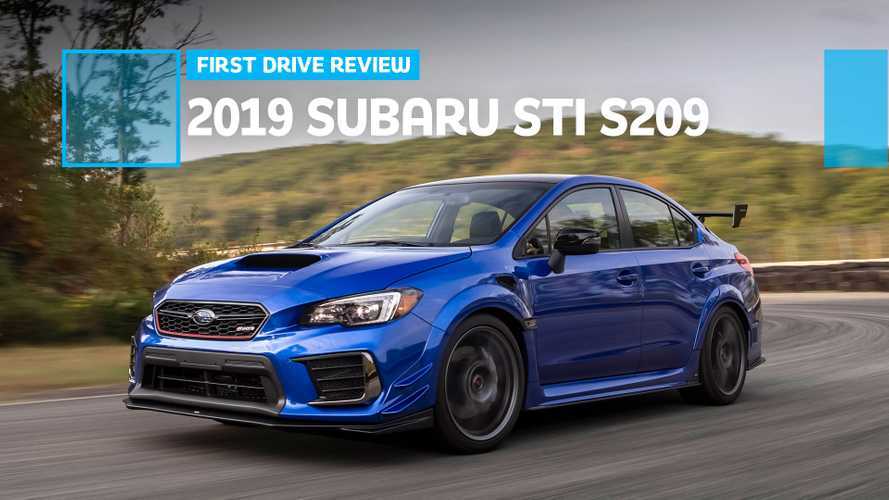 A JDM treat, built exclusively for the U.S.

For over 20 years, Subaru fans in the United States have looked upon the Japanese domestic market market with envy. Sure, we (finally) got the WRX in 2002, followed by the WRX STI in 2004, but it’s the Holy Grail of Subaru performance – the S-Line cars – that have remained exclusive to the Japanese market since the first model bowed there in 1998. That changes this fall with the introduction of the 2019 STI S209. And, in an interesting flip of the script, it’s also a US-only model.

Despite its visual similarities to the Subaru WRX STI, this is a largely hand-built vehicle with a considerable array of S209-specific parts, developed by the 120-strong team at STI.

The limited-volume nature also explains why it’s taken this long to get an S-badged model outside of Japan. Unlike the WRX and WRX STI, which Subaru builds in the thousands and exports all over the world, all S-Models begin life in the same factory, before heading to the STI facility in Kiryu, Japan, where STI works its magic. During that transformation, however, STI makes so many changes to the car that it no longer meets the same homologation requirements as the mass-produced vehicle on which it’s based.

That homologation process, of course, is the cost of doing business for volume manufacturers. But for a small outfit like STI, which produces only two or three cars per day, it’s a daunting and expensive task. So the barrier to offering any STI-massaged car outside of Japan isn’t just a challenge of production or politics, but also logistics. But change does happen. The current generation of the WRX STI has been an exceptionally strong seller in the US, and this ongoing sales success was a key factor in swaying the top brass back home to commit to bringing the S209 to these shores.

It’s All In The Name

Up until now, the term “STI” in the states represented the high-zoot version of the WRX. The acronym stands for Subaru Tecnica International, which, in addition to being a model name, is also a motorsport division within Subaru. In order for the S209 to be homologated outside the Japanese market, STI (the division) also had to be homologated as a manufacturer. So, technically, the S209 is badged as an STI, not a Subaru (which continues to produce the WRX STI). Got that?

Give A Little Bit

Naturally, there are some stiffer and beefier bits: the front crossmember and rear subframe feature additional reinforcement, stiffer and shorter coil springs work in harmony with specially tuned dampers, and the rear axle gains a 20-millimeter stabilizer bar.

The most interesting bits underneath the S209, however, make it both more rigid and more compliant using technology originally developed for the WRX STI Nürburgring Challenge race car, a class-winning vehicle in the grueling Nurburgring 24-hour race. While it may sound like an impossible contradiction, the proof is in the pudding. A flexible front-strut tower bar is split in the center and joined together by a pillow-ball joint. This combination allows the brace to move longitudinally while simultaneously stiffening the lateral movements of the car. This wonder of engineering is accompanied by flexible front and rear draw stiffeners, which apply tension between the body and crossmember. The result is improved steering response and better stability during cornering. Specially designed sway bar bushings reduce deformation under load.

All of these additions really underscore the hand-built nature of the S209 as well. The rear draw stiffener is not only visible in the trunk, it’s also fragile, so Subaru painted the exposed bits pink. Despite this addition, the rear seats still fold down in a split 60/40 configuration. And those swaybar bushings? The normal production cars get two-piece bushings, which are easier to attach on the assembly line. But here, they’re hand-fastened one-piece units, to attain the kind of stability STI engineers were looking for.

Power To The People

The powertrain follows the classic Subaru performance formula: a turbocharged four-cylinder Boxer engine driving all four wheels, mated to a six-speed manual transmission. Underneath the hood of the S209 resides the familiar EJ25 2.5-liter four-cylinder, in this case making 341 horsepower at 6,400 rpm and 330 pound-feet of torque at 3,600 revs. That’s 31 hp and 40 lb-ft more than the WRX STI’s 2.5-liter produces. Much of the credit goes to an HKS-built turbocharger that’s not only larger than the one found in the WRX STI, but also features a higher maximum boost of 18.9 pounds per square inch (PSI), an increase of 2.7 PSI. Die-hard enthusiasts will no doubt be thrilled to see the return of an intercooler spray system, last seen on the 2004 to 2007 WRX STI, to improve the IC’s efficiency during aggressive driving. The engineers didn’t stop there, also adding a high-flow intake system routed through a conical air filter as well as a high-flow fuel pump and 20-percent larger fuel injectors.

Launch it off the line and the S209 growls like the powerful boxer it is, sailing to 60 in a little under 5 seconds. Keep the engine in the thick of its power band and the S209 is a lively, responsive performer.

Otherwise, that larger turbo and lofty power peak require a significant amount of patience. When the engine is loafing below 3,000 rpm, it’s rather comical to peg the throttle at 100 percent and wait for the boost needle to slowly, slowly follow suit. This is true whether you’re on a back road in fourth gear or on the highway cruising along in 6th.

More Track-focused Than Ever… With One Exception

Given the fair amount of tech cultivated from its Nürburgring race program, it’s no surprise the S209 shines on a road course. Palmer Motorsports Park in Western Massachusetts is a twisty, technical track featuring tremendous elevation changes (over 190 feet separate the track’s lowest point from its highest). The course features an abundance of steep hills to climb and equally precipitous downhill sections, combined with blind corners and extremely late apexes. In other words, it’s the perfect setting for a turbocharged, all-wheel drive car.

Optimal performance comes from first setting the center differential to full minus for the most rear bias, and SI-Drive to Sport. Interestingly, STI engineers tell us the more aggressive Sport-Sharp is most suitable for sprinting to 60, rather than attacking a circuit. Setup handled, there’s nothing left to do but drive.

From the first corner, it’s evident that the combination of the new tires and draw stiffeners do wonders for handling. Turn-in is noticeably sharper and more precise, and the steering feedback from the hydraulic rack is exceptional. While there’s still a hint of understeer, the Dunlop SP Sport Maxx GT600A tires and their unique rubber compound ferociously hang on, even at the limit of adhesion, before predictably breaking away. Braking is equally confidence inspiring. Like the WRX STI, the S209 features Brembos all around, here with new high-friction pads. Six-piston calipers up front and two-piston clampers out back deliver impressive and stable deceleration each time.

From the first corner, it’s evident that the combination of the new tires and draw stiffeners do wonders for handling.

If only the seats offered the same stopping power. Nowhere is the target of the American market more accurate than in the wide, flat seat bottoms of the Recaros. The total lack of thigh support means your legs will feel the full G generated by the S209 when cornering, as they flop back and forth between the door and center console like a rogue pinball. Another tactile quibble concerns the short-shifting six-speed, which is extremely notchy and doesn’t like to be rushed. And while the intercooler sprayer is a nifty trick, there was no discernible performance difference after engaging it. But those are minor quibbles in an otherwise well-sorted machine. True track-day enthusiasts will likely swap out those front seats anyway for something more supportive.

Will You Want One?

Actually, the better question might be, can you get one? Production of the S209 is limited to – surprise! – only 209 units: 128 in WR Blue Pearl and 81 in Crystal White Pearl, all of them bound for the U.S. As of this writing, Subaru hasn’t revealed which dealerships will be lucky enough to receive an allocation, though it’s likely it’ll be markets in which the STI has been most popular.

Subaru has also been mum on pricing, though given the 2018 Type RA stickered just shy of $50K, it wouldn’t come as a surprise if the more powerful and hand-built S209 commands closer to $60,000. Of course, that’s just speculation until pricing goes live later this fall. Only time will tell once the S209s hits those lucky few dealer lots in November.

The upside to this potential demand, of course, is the promise of future S-Line products making it to these shores. During the event, one of the STI engineers hinted that development on the S210 was already in the exploratory process. When pressed for details, he smiled and said, “Just exploratory!”

Now that all those pesky homologation logistics have been sorted out, STI (the brand) now has a much easier path for bringing new product to market. Think of the S209 as being less of a tease and more of a high-performance, hand-built toe in the water.