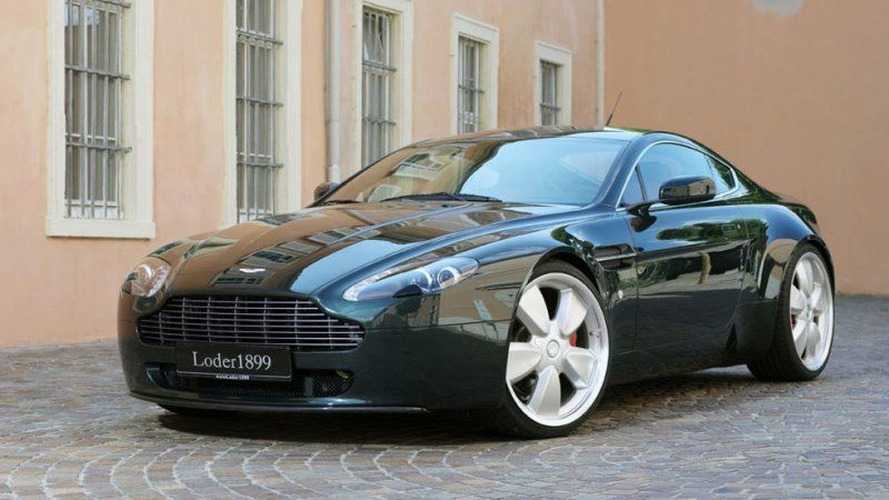 That was until I burst through the 4000rpm watershed in Loder1899's take on the English songstress, and my ears were blasted with something more beautiful than Shakira and Jennifer Lopez starting a playful pillowfight behind my bedroom door.

It was hard to imagine how anyone could improve on the notes turned out by the Aston Martin AMV8 and the whole concept sounded as ridiculous as taking Pavarotti to a voice coach.

That was until I burst through the 4000rpm watershed in Loder1899's take on the English songstress, and my ears were blasted with something more beautiful than Shakira and Jennifer Lopez starting a playful pillowfight behind my bedroom door.

The deep, gravelly bass from the V8 was reminiscent of a World War II fighter plane, a lazy, flat plane crank rumble jacked up to near deafening levels. It's an audacious noise, at the opposite end of the spectrum to a harmonic, high-strung Ferrari. But it's just as beautiful.

And it doesn't matter that the Aston is still a little slow considering that it's competing with the Porsche 911 Turbo on price grounds with these mods, it's so much more emotive that it's shortcomings don't seem to matter. Character buys a lot of leeway in this world and the Aston just has that X-factor in abundance.

It's potentially the most beautiful, organic GT car on the planet. Tighter and more compact than the substantially bigger DB9 it's a sensational looking thing. And therein lies the danger for tuners, like the kids that hang dustbin-sized exhausts and aeroplane-sized wings off their hatchbacks there's a real danger of ruining the car. Adding to an Aston Martin takes a truly delicate touch and a real understanding of the brand's heritage.

Brother and sister Maximillian and Julia Loder have taken their family Ford sales and tuning business to the next level with the Aston Martin. And though it's a German firm, Max somehow manages to be more stereotypically English than the Queen and spent time in our public school system. While his countrymen were dreaming of Porsche 911s, therefore, he was fully indoctrinated into the beauty and regality of this English supercar and was itching for the chance to tune them.

Of course there's another reason for the delicate treatment on the mechanical side, if they start messing with the engine then they're responsible for the warranty. And while the Aston may be as elegant as a butterfly, it's pretty much as fragile, too, so they're limited to external treats for the moment. Should the kit truly take over they'll give it the full works, and if enough folks hear that rampant exhaust they'll be queuing up round the block for a serious power hike.

With the simple addition of a stainless steel sports exhaust system with a new catalytic converter that costs less than £6000, they've managed to unleash another 20 horses from the 4.3-litre V8 - taking the car to 405bhp in total. That does nothing to improve the performance figures, it still hits 60mph in 4.9s and tops out at 175mph, but that raucous Messerschmitt exhaust note makes it feel twice as fast.

Driven gently, the bypass valves stay closed even past the 4000rpm mark, and the raucaous V8 contains itself to a considerate baritone roar. The valves only click fully apart when the gas is planted, an ingenious move that will prevent the car attracting the wrong kind of attention in town. Given its full head on a winding back road, though, this car is hilarious.

And it's much quicker round the corners thanks to a four-way adjustable sports suspension system set up by a racing driver friend of Max Loder. The AMV8 is a deliberately heavy car, as it wasn't enough to make a slightly cheaper version of the DB9 and the Gaydon firm went out of its way to make it an aggressive, angry machine that required driving with the shoulders.

It was also prone to breaking away into roll oversteer mid-corner, which ranks right next to shark attacks on the things that are best avoided list. So this kit that drops the car 20cm and stays rock solid through the apex and will only break traction with an obscene stab on the throttle, in other words only when the driver asks it to, is a useful addition.

A fixed kit would have done the job just as well, though, as few will drive their Aston on track and even less will want to mess round with the suspension height and damper rebound. Even if the average AMV8 driver wanted to tweak their car they'd probably end up a million miles from the ideal set-up given to them by Loder's race ace. So the titanium kit is probably overkill, but it feels good nonetheless.

As do  the few discreet flashes in visible carbon fibre. The front lip spoiler joins forces with a discreet rear diffuser and spoiler that are subtle, yet muscular additions to the V8's body. The most dramatic aesthetic addition comes under the bonnet, bizarrely, where a carbon-fibre engine cover stretches like a tarpaulin on both sides. It's the kind of thing men will show each other in golf club car park's and they will coo like young women over baby photos. It serves no other useful purpose, but it is cool.

The wheels might look like clunky hobnail boots on a supermodel, and I'd prefer a slender spoke design, but they are lightweight, hollowspoke numbers and Loder is determined to keep the weight right down and was prepared to pay the price on the aesthetics. It will be interesting to see if the customers agree.

There are others tuning the AMV8 now, with Cargraphic and Eibach both doing a stunning and more thorough job. But Loder1899 was the first to let me loose in their machine and the sound of their car will live forever in the memory. They really have improved on the glorious tone of the AMV8, Pavarotti might want to head for that tune-up after all.