Despite consisting of nothing more than outdated trucks and SUVs, Toyota’s TRD Pro lineup enjoys a cult-like following among off-road enthusiasts. These body-on-frame monsters lack the refinement and some of the modern touches found in other cars, but Toyota brand loyalists still love them.

Take the 2020 Toyota 4Runner TRD Pro, for example. This SUV oozes character with its fantastic Army Green paint job, rooftop cargo basket, and chunky off-road tires. Driving it around often elicits more double-takes from passersby than most Wranglers. The question is whether or not this rugged 4Runner’s charm is a worthy trade-off for its aging interior and hefty price tag.

Although the answer isn’t one-size-fits-all, we think the pros outweigh the cons here. The TRD Pro is another shining example of Toyota’s ability to keep its cars engaging even in the last few years of their lives.

Ok, so maybe this bit is subjective, but who here can speak against the Army Green paint and still stand in good conscience? We’ll water down the “perfect” talk and instead say that this 4Runner looks damn good. Beyond the beautiful, creamy green coat, the rest of the SUV looks menacing with the TRD Pro–specific “TOYOTA” front grille, black TRD badging, and huge roof cargo basket. The top-tier Pro model also gets a set of matte black 17-inch wheels wrapped in Nitto Terra Grappler all-terrain tires so you really know it means business.

Though it’s all a little overdone, the look tugs on our enthusiast heartstrings; it’s just wild enough but doesn’t overdo things. This niche of an off-road vehicle only appeals to a particular group of customers, and for those interested in the TRD Pro, we think the design is extremely appealing.

Off-Road Ready, But Not Unrefined

The obvious reason to spring for the TRD Pro over a more affordable 4Runner model, is, of course, the off-road capability. In place of the standard 4Runner’s suspension, the green monster features Fox shocks and specific TRD-tuned front springs. Other tricks like locking rear differential, multi-terrain select, and revised front and rear bumpers (for enhanced departure and approach angles) round off the Toyota’s special kit. There is also a row of auxiliary buttons, ready for aftermarket light bars, winches, etc.

Although our quarantined review period didn’t offer us the chance to go too far off the beaten path, we did manage to get the TRD Pro dirty and even a bit vertical (see photo). In practice, we love the Pro’s do-it-all attitude. The 4.0-liter V6 puts out 270 horsepower, but more importantly, 278 pound-feet of torque. That’s more than enough twist to smoothly accelerate up hills and power through mud puddles. And while we didn’t tackle the tough stuff this time around, we’ve driven enough of these models to vouch for their off-road prowess. With the 4Runner, we’re also inclined to give it accolades for its lovely on-road behavior. Apart from some dull tire noise from the big Nittos, the TRD is generally quiet. And thanks to the sophisticated shocks, the car is nicely composed around town and on the highway. In this case, opting for the off-road machine won’t make normal roads miserable.

Often we find that parts of a car can be both a pro and a con. Such is the case with the 4Runner’s dated, but comfortable interior. We’ll get to the downsides in just a second, but it’s not all bad. The Toyota’s leatherette-covered front seats offer adequate support during long drives and hold you in nicely. The rear bench, meanwhile, is actually quite roomy.

After experiencing both rows, there really isn’t a bad seat in the house, with 39 inches of headroom for everyone, 41 inches of front legroom, and 33 inches of rear legroom. Or as a 6-foot, 2-inch friend put it when jumping into the back, “Hey, not bad.” There is also a massive 46.3 cubic feet of cargo space, which will easily swallow a road trip’s worth of gear (and that’s without adding to the cargo basket). This is a great SUV to grow a family with until a third row is needed. 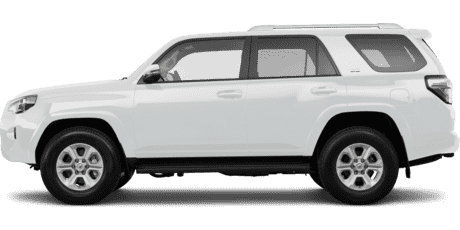 Insides Older Than Your Grandma’s House

While we compliment the 4Runner for its comfy interior, the accolades stop there. Toyota has done an exceptional job of hiding the car’s age with accessories and paint colors, but the switchgear is still ancient. Look no further than the 8.0-inch touchscreen or teeny-tiny gauge cluster display. Both of these screens are way down on size compared to newer units in the Highlander, for example. Sought-after features like blind-spot monitoring and a 360-degree camera aren’t available, either.

The entire dash is a throwback to Toyota of 10 years ago (check out the clock and shift lever) and needs to be brought back to life. It’s simple and it’s easy to use, but any of the 4Runner’s rivals provide a more up-to-date experience.

In fairness, the TRD Pro is no worse off in the efficiency department than any of the other 4Runner models, but that’s not much to brag about. The 4Runner is rated at 16 miles per gallon in the city, 19 on the highway and 17 combined. The least efficient Jeep Grand Cherokee with its V6 nets 18 city, 25 highway, and 21 combined. Toyota’s dated five-speed transmission has fewer gears and older software, which makes for a less-than-positive impact on efficiency – Jeep’s eight-speed automatic is a boon in this regard.

Toyota TRD products tend to run up the score on price, and the 4Runner TRD Pro is no exception. Our test car rings in at $51,580, including the $1,120 destination fee. That’s higher than a comparable Jeep Grand Cherokee Trailhawk, which starts at $45,400, comes with 23 more horsepower, a far nicer cabin, and more advanced technology than the 4Runner.

Within the 4Runner family, the TRD Pro costs $13,000 over the base model which packs the same powertrain. If it’s just the Pro’s killer looks that you’re after, we’d recommend looking at the expansive TRD parts catalog and dressing up a cheaper trim level.