Miami is the third-largest market for Rolls-Royce in the entire world. But that shouldn’t shock anyone who’s walked along South Beach – Ocean Drive is littered with vehicles that are both absurdly expensive and, often, extraordinarily gaudy. But when big events like the Super Bowl occasionally roll into town, the streets overflow with even more Rolls-Royce products as superstars like Odell Beckham Jr. (who, the company said would be rocking a Cullinan Black Badge for the game) treat vehicles from the high-end manufacturer as their personal magic carpets. 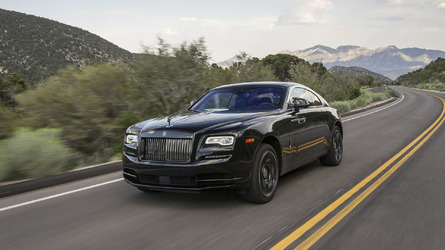 So we channeled our inner OBJ (without the on-field skills) and hopped into the driver's seat of a Rolls-Royce Wraith Black Badge for an afternoon. A brief drive from Miami's Wynwood arts district, through South Beach, and up the coast – even with tons of traffic and stormy weather – provided us a brief glimpse of what navigating Miami in a Rolls-Royce is like. Spoiler alert: it’s fantastic.

All Black Badge Everything

First, a brief schooling on what “Black Badge” means for Rolls-Royce. The company first coined the term in 2016 – initially on the Wraith, then the Dawn convertible, and most recently on the Cullinan SUV (which we also drove). By and large, Black Badge affords each model a subtle sporty treatment that incorporates new visual cues like a darkened grille and Spirit of Ecstasy badge, fresh wheels, and noticeable interior touches, not to mention minor tweaks to the powertrain.

In the Wraith Black Badge specifically, the twin-turbo V12 pumps out the base model's same 624 horses. Only here, there’s an extra 52 pound-feet of torque, bringing the total figure to 642 lb-ft. With that extra twist, it takes just 4.3 seconds for the Black Badge Wraith hit 60, with a top speed limited to 155 miles per hour. But power only tells part of the story.

Yes, the Wraith exhibits noticeable giddy-up as we travel up I-95 just north of Miami Beach, the only stretch of highway where we're able to push it. Throttle response is more immediate – the touchier gas pedal helps that V12 unleashes gobs of power more quickly. The Wraith Black Badge has enough oomph to satisfy new, young clients (like celebrities and athletes) who call for both power and luxury, but not too much to dissuade Rolls-Royce purists.

True To The Mission

But the mark of any good Rolls-Royce isn't necessarily power, nor even the hand-built V12 from which it emanates. The specific details surrounding that massive heart – ride quality, cabin materials, comfort, etc. – are what makes a Rolls-Royce a Rolls-Royce. And the Wraith Black Badge, even with sporty new markings, stays the course.

South Beach traffic gives us plenty of time in the passenger seat, and thus, the opportunity to pore over the Wraith Black Badge's more spectacular details. A willing Rolls-Royce employee squeezes in the backseat as we melt into the super soft, two-tone, red-and-black front bucket. The attention to detail inside this car is absurd.

The Wraith Black Badge, even with sporty new markings, stays the course.

The ergonomics of Wraith Black Badge carry over unchanged compared to the standard model, but now things like the air vents, adjacent fascia panel, and various other trim pieces wear a sinister black chrome finish rather than the traditional bright silver. The dashboard also sports a new “Bespoke Technical Fiber” surface rather than wood, and an “Unlimited” infinity logo atop it. Of course, the “Starlight Headliner” also carries over – because why would you want a Rolls-Royce without it?

In terms of places to sit, the Rolls-Royce Wraith (even as the “sportiest” of the range) still rides like a luxury penthouse on wheels. Sound deadening is so good you can barely hear the V12 powering up. There’s only a faint exhaust note, which Rolls-Royce butched up for the Black Badge models specifically. The Cullinan and Ghost are probably a bit more comfortable, if not simply because of their spacious interiors, but the Wraith retains virtually all of the same posh amenities.

The Rolls-Royce Wraith Black Badge costs $380,000, a noticeable uptake over the standard Wraith’s $120,000 price. But that's not important. Young, affluent shoppers looking for a more sinister take on the Wraith will pay anything for that exclusivity. And frankly, the Wraith Black Badge is worth the money. This is a sexy, powerful, and (even on the streets of South Beach) eye-catching vehicle that lives up to its lofty price tag. We believe the hype.