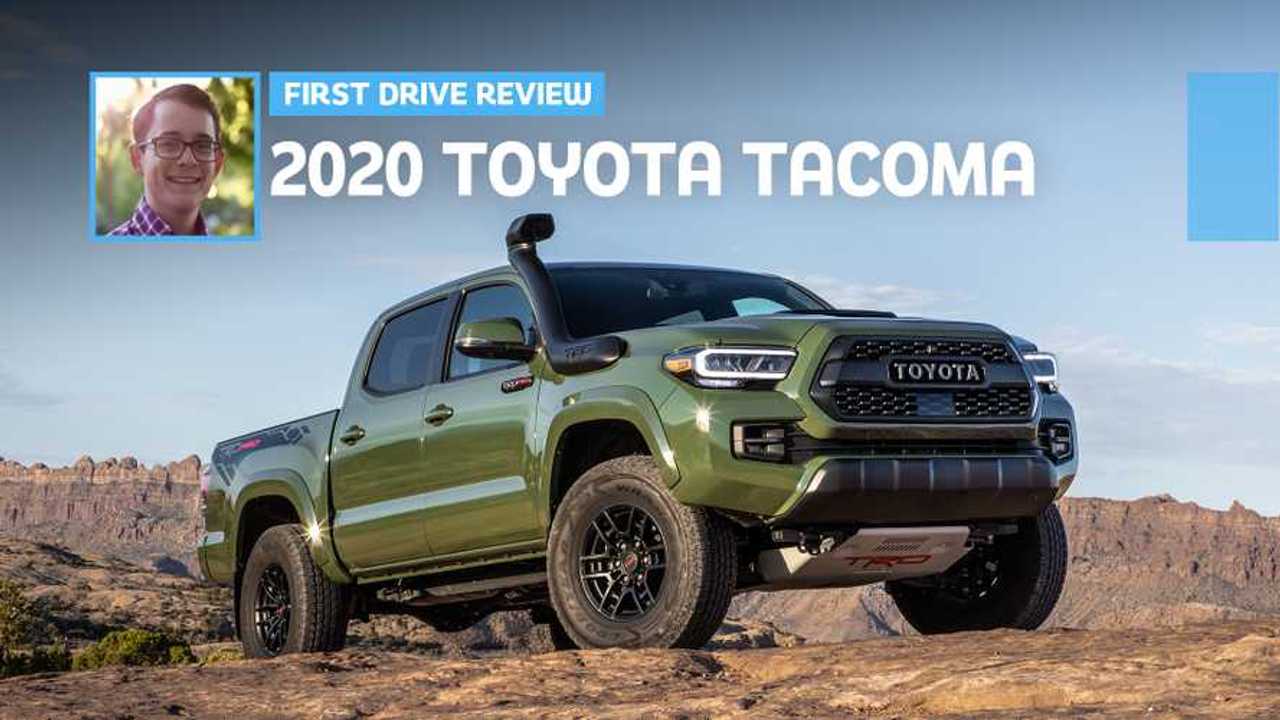 We hit the trails in Toyota’s mildly updated mid-size pickup.

Update: A previous version of this story indicated that Toyota Safety Sense is newly standard to the 2020 Tacoma. This is incorrect. The Tacoma has featured Toyota's active safety suite since 2018. TSS is newly standard on all 4Runner SUVs. The post has been updated accordingly.

In the past year, the mid-size truck segment welcomed an insanely capable Chevrolet Colorado ZR2 Bison, a reborn Ford Ranger, and the all-new Jeep Gladiator. And yet, despite an onslaught of new and improved competitors, the Toyota Tacoma is still the best-selling mid-size truck, one of the top 15 best-selling vehicles in America, and Toyota’s body-on-frame sales king.

And Toyota’s not waiting for the competition to catch up. As the Gladiator and Ranger hit their sales strides, the Japanese company is curing a few of the common complaints critics and Tacoma owners bemoan.

First up: a 10-way power seat. It’s standard on all SR5 or higher trim V6 models. Drivers have long complained of the Taco’s awkward driving position, and the seat’s power tilt function should help them get more comfortable. I never personally had a problem with the Tacoma’s seats, but I didn’t develop any sore spots after hours of driving on gravel and dirt.

This new truck also receives some much-needed infotainment updates. The Tacoma, along with its 4Runner sibling, is the first Toyota vehicle with Android Auto support. Like a handful of company’s newer products, the Tacoma now sports Apple CarPlay. However, if you decide to use Toyota’s system instead, you’ll benefit from an updated version of Entune.sThese additions don’t make the Tacoma best-in-class when it comes to multimedia (that honor remains with the Gladiator and its UConnect suite), but it’s a lot better than it used to be.

These additions don’t make the Tacoma best-in-class when it comes to multimedia, but it’s a lot better than it used to be.

The Limited, TRD Off-Road, and TRD Pro models also come with a surround-view camera that offers a birds-eye view of the truck to help maneuver it out of sticky situations. TRD models also include a multi-terrain monitor that feeds in side and front views to help you navigate blind obstacles on trails.

That came in handy throughout our excursion on trails near Moab, Utah and Ouray, Colorado. Splitting our time between the TRD Off-Road and TRD Pro models, we navigated over steep, slick rock formations, muddy trails, snowy mountain passes, and descents rife with loose rock.

On the road, the Tacoma is less impressive. It still uses the same 278-horsepower 3.5-liter V6 that’s been around for ages. As in the past, the engine mates to either a six-speed manual or six-speed automatic transmission. There’s a lot of slack in the powertrain, with slow downshifts and generally lazy response from the automatic.

On the road, the Tacoma is less impressive.

The Tacoma is also far from the smoothest-riding vehicle in its class. While the addition of Fox racing shocks last year helped smooth the TRD Pro trim on high-speed washboard surfaces, both grades of Tacoma are still easily unsettled. Even on smooth pavement, there’s a jigglyness to the ride that makes the truck shiver constantly. On the gravel mountain passes between Moab and Ouray, the Tacoma beat us up.

Those ride sacrifices weren’t made in the name of handling, that’s for sure. Like most off-road-oriented trucks, both Tacoma TRD grades heave into turns. If you want agility, then soft springs and high-centered masses aren’t the best places to start. The Tacoma isn’t sloppy but it’s far from pleasant on twisty roads. Steering, predictably, is vague.

Luckily, the cabin updates have made the Tacoma’s cab a better place to spend your days. The aforementioned power seats are a welcome addition, standard adaptive cruise control lightens your driving load, and the infotainment system goes from actively frustrating to just a bit slow.

Unchanged, of course, is the Tacoma’s unparalleled reputation for quality and its broad aftermarket support. Our trip concluded at FJ Summit, an annual meetup of Toyota fanatics from across the country, which floods Ouray with customized Tacomas, 4Runners, FJ Cruisers, Land Cruisers, Lexus GXs, and more. Predictably, we saw a bunch of Tacomas bounding up the trails as we meandered to the top of a 13,000-foot mountain.

Combine that community and reputation with some of the best resale values out there and it’s easy to see how Toyota moved 245,659 Tacomas in the U.S. last year. The Tacoma doesn’t have the best interior, isn’t the most refined, and doesn’t tow the most in the class, but undeniable old-school charm continues to be its strongest selling point.