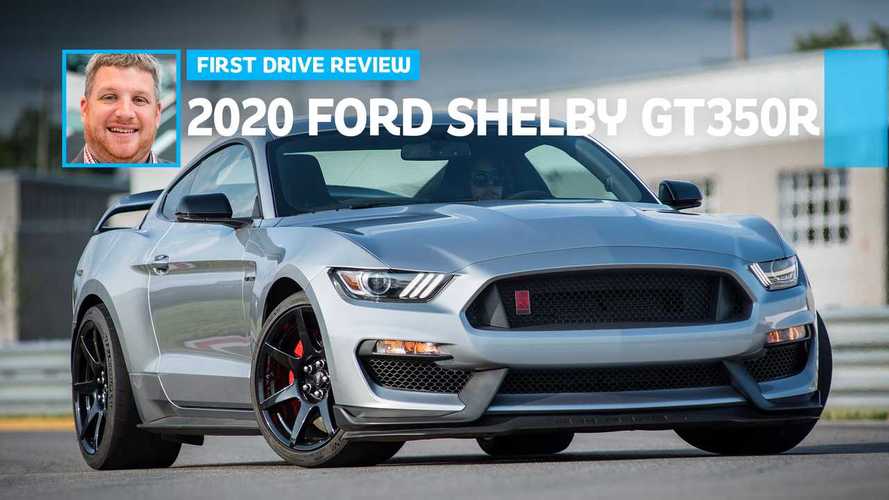 The 2020 Ford Shelby GT350R is an imposing mass of wings and splitters and flared wheel arches. It's not just visually loud, it’s audibly so, too, with a shrill, angry note emanating from its quad-tipped exhausts. And, of course, it's agile and fast. In short, everything about the GT350R is meant to intimidate and make a statement.

Which made its composure as I puttered down metro Detroit's famed Woodward Avenue so befuddling. This is an unapologetic track car, designed first and foremost to set lap times. But it's civilized and relaxed on the road. Credit improvements designed for performance that just so happen to benefit on-road behavior. This is a track star, but not one to be afraid of. Anyone who has ever said you can't daily drive a track car needs to meet the 2020 Ford Shelby GT350R.

The main reason the 2020 GT350R works so much better on the road comes down to a handful of modest suspension tweaks. Ford adjusted the front suspension geometry, added a more precise steering rack, tweaked the tuning of the power steering, and snagged the steering knuckles from the GT500. This is all good for track work (more on that below), but the changes are revelatory on public roads.

The standard GT350 is prone to obnoxious levels of tramlining, or pulling aggressively side to side as the suspension reacts to the contours of uneven roads. The GT350R’s updated suspension curbs this tendency, though. The Shelby tracked straight and true on Woodward and other roads in metro Detroit, and along with magnetic dampers and adequate sidewall on the super-sticky Michelin tires, presented itself as a livable daily driver.

With the tramlining issues solved, the GT350R felt impressively composed during the all-too-brief stint on public roads, with the suspension, even in Sport, reacting well to bumps and imperfections and presenting a stable straight-line character. I didn't get to sample the GT350R's behavior while cornering, so I can't say how it would handle a pothole mid-turn, but based on the short on-road session, this Mustang feels plenty at home in traffic.

Traffic isn't where the GT350R is happiest, of course. This car craves the track, an environment that takes all the good work Ford's engineers did and amplifies it. And for that, I took to the 1.5-mile circuit at the M1 Concourse, in Pontiac, Michigan. M1's Champion Motor Speedway offers a good mix of fast, sweeping turns and tight, sharp corners. While there's a mere 25 feet of elevation change, the track uses it well. It's a fun, short circuit and a prime place to explore a car like the GT350R.

That starts with the brake pedal and steering, the first elements you exercise after exiting the pits. The first right-hand turn comes up quickly and calls for aggressive braking, which the Brembo-branded stoppers are all too willing to accommodate. Up front, there are a pair of 15.5-inch rotors and six-piston calipers, while 15.0-inch discs and four-pot binders are on the rear axle. It's a reassuring setup, able to not just bleed speed during repeated hard braking, but to do so with the kind of confident pedal feel that leaves the car's pilot willing to brake later and later for each corner.

This car craves the track, an environment that takes all the good work Ford's engineers did and amplifies it.

The steering, which I've always found numb and uninspiring while driving around town, comes alive on track. The revised setup is incredibly quick, almost Alfa Romeo-like in its behavior, and combined with the firm suspension, allows the GT350R to rapidly change direction. You can really wait until the last possible second to turn in and the R will respond eagerly. Feedback still isn't abundant, but it's there, and the communicative chassis makes up for any shortcomings in the rack.

Overall, though, it takes just a couple laps of M1 to start to feel comfortable pushing the GT350R with vigor. It takes far less time than that to become enamored with its powertrain, though.

Sing The Song Of Your People

There should be songs written about this 5.2-liter V8. The flat-plane-crank design is unique in American performance vehicles (at least until the next Chevrolet Corvette Z06 arrives) and feels so distinctly charming and characterful that it's a wonder why more automakers haven't embraced this engine design. Flat-plane crank all the things, I say.

The 527-horsepower engine feels like the perfect choice for a track car, revving eagerly and offering relentless high-rpm performance. Tip into the throttle smoothly while exiting the hairpin, like the one leading onto M1's longest straight, and the engine speed climbs quickly. Even if you stab the right pedal aggressively or recklessly, the GT350R feels like it will maintain its composure – even with the stability control in a more relaxed setting. With 429 pound-feet of torque coming in at 4,600 rpm, this simply isn't the kind of engine that develops its power in big, turbo-like dollops. Instead it opts for linear, predictable performance. The only dips in acceleration come when it's time to grab the next gear.

Like the steering, the gearbox seems to work better on track, where urgency when changing gears allows us to ignore its notchiness on public roads. The clutch pedal has a fair amount of travel, but thanks to the sharp throttle response, it's easy to execute rev-matched downshifts. Weirdly, Ford opted to forgo the Mustang GT's automatic rev-matching feature.

In fact, my main complaint is that the GT350 lacks some of the same refinements found in the standard Mustang. Ford has its reasons for not updating the front fascia, but it's yet to sell us on the lack of the standard model's 12.3-inch digital instrument cluster. Ford offers this setup in the GT500 and the aforementioned Mustang, and the display's reconfigurability would be a welcome addition on a track car. It would also allow a broader canvas for the standard performance data screens.

These absences don't change the fact that the GT350R represents a thoughtful update to a popular track car. They do, however, make it harder to recommend if you own an older Mustang, particularly a Shelby. This is an updated car, but it rarely feels like one where it matters most: the track. The improvements on the road are welcome – we wouldn’t hesitate to daily drive it – but if you were hoping for more than incremental improvements, you’ll be disappointed. Still, the GT350R remains a likable and confidence-inspiring track car with an accessible level of performance, even if it isn’t much more exciting for the 2020 model year. Prices for the 2020 Shelby GT350R start at $73,435.