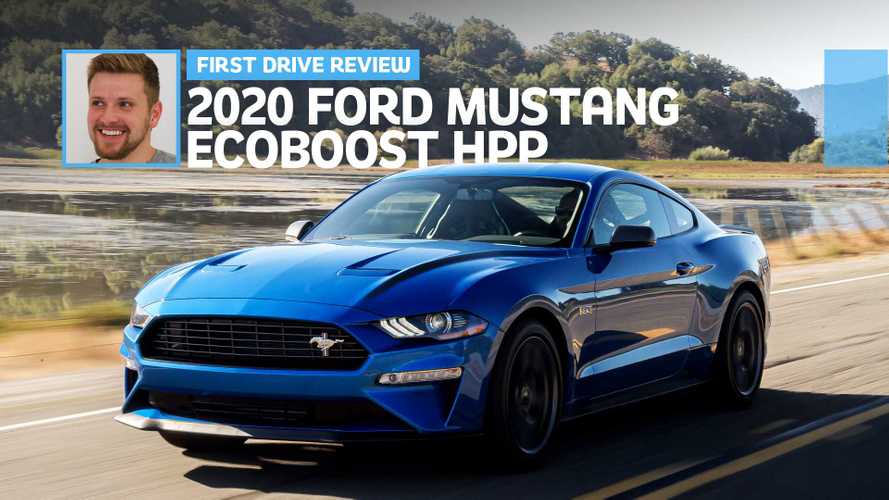 This isn’t a Mustang, it’s a lightweight sports car in muscle car drag.

Like most muscle cars, the Ford Mustang has always been about one thing: Straight-line speed. And yes, while the company still emphasizes the importance of quarter mile times and sprints to 60, the Blue Oval now puts extensive engineering effort into the Mustang’s handling, as well. That’s obvious from a few models (like the GT350R, for example), but none as attainable than the new Mustang EcoBoost High Performance Pack, or HPP.

The title "Mustang EcoBoost High Performance package" is accurate when talking about performance, but the only distinguishable feature on the exterior is an inconspicuous "High Performance 2.3L" badge on the side fender. Outside of that, this looks like your run-of-the-mill four-cylinder Mustang with slightly different wheels, quad exhaust tips, and a few more fun colors: Grabber Lime, Red Hot Metallic, and Twister Orange, included.

The optional Handling package ($1,995) butches up the styling a bit. There are new Mustang GT-esque wheels, a Mustang GT front splitter and spoiler on the outside, and a pair of Recaro seats in the cabin. And HPP models get a chassis number plate (one of 9,999) on the passenger-side dash distinguishing it from other Mustangs.

But overall, the general Mustang formula carries over to the HPP’s insides. This includes some cheap plastic littering the dash, lots of nicer leather (on the higher trim models) covering the seats and door panels, and the same attractive 12.0-inch digital instrument cluster and super-cool toggle switches that are available on higher-trim Mustangs. However, it's what's underhood that matters most.

As the cliche goes, this ain't your father's four-cylinder. Like many of the best muscle cars, the Mustang HPP started life as a skunkworks project. Some inventive Ford engineers shoehorned the 2.3-liter four-cylinder from a Focus RS prototype into a Mustang and were so satisfied with the result they submitted it to execs for final approval.

And that four-banger is arguably even more charming in the Mustang than it is the all-wheel-drive Focus. Of course, it isn't an identical carryover. It benefits from a new head gasket, a larger twin-scroll turbo with 22 pounds of boost (which took just two weeks to design), and a larger radiator. The final output from the HPP’s four-cylinder is a respectable 332 horsepower and 350 pound-feet of torque, which makes it the most powerful four-cylinder sports car ever offered by an American manufacturer.

That's less power than the 350 horses available on the Focus RS, though, and a mere 22-hp bump over the traditional Mustang EcoBoost . But power deployment, rather than sheer output, is what matters most here. The Mustang HPP reaches max twist at 3,000 RPM, whereas the Focus RS peaks at 3,200 RPM. The HPP also has a 40-percent wider powerband than the normal EcoBoost and produces 90-percent of peak torque at redline.

You Down With HPP?

Three-hundred-and-thirty-two horsepower have never felt this lively. The Mustang EcoBoost HPP doesn't want for power as we race up the 101 freeway just north of the Golden Gate Bridge. The modified four-cylinder's oomph mimics that of a larger V6, as it lacks virtually any lag or laziness. There’s just gobs of power routed to the rear wheels via our tester’s 10-speed automatic transmission. Ford says the Mustang HPP hits 60 miles per hour in 4.5 seconds – just over half a second shy of the standard Mustang GT (3.9 seconds). That's seriously quick for a four-cylinder, and it feels it.

Whereas the 460 horses in the Mustang GT need a good wringing out to hit their peak, the HPP's power output feels more usable. There's lots of low-end grunt yet still tremendous amounts of torque high in the rev range. If there's any plateau in power, we didn't feel it. This is a ridiculously good engine, and, with the active exhaust system, one of the best-sounding four-pots on the planet (outside of maybe the Alfa Romeo 4C).

This is a ridiculously good engine, and, with the active exhaust system, one of the best-sounding four-pots on the planet.

But the exceptional engine gets weighed down by some characteristic Mustang-ness. The recalibrated 10-speed automatic, though better here than in any other Ford product, is still imperfect. In Sport+ mode, the transmission optimizes power from the torquey engine well, but it responds sluggishly in other driving modes. Simple solution: Get the manual. The brakes are difficult to modulate at lower speeds, the steering is still noticeably dead on-center, and there’s a general overboosted vagueness (even in the steering’s weightiest Sport setting) that makes it tough to fearlessly toss this car around. But that can be fixed.

Pay for the optional Handling package. Trust us. It's worth every penny of its $1,995 asking price (available atop the High Performance package). With it, the Mustang HPP transforms from merely quick in a straight line to uncharacteristically precise and agile in corners, too. Included in the package is a new Pirelli P Zero Corsa tire (instead of the non-Corsa rubber on the standard HPP), half-inch wider wheels, the Mustang GT Level 2 Performance pack's stabilizer bars, Ford's borrowed MagneRide adaptive dampers, and a torsen limited-slip rear end.

Where the standard Mustang HPP almost feels too soft for the torquey new engine, the Handling pack tightens things up to near perfection. There's no more on-center steering slop or ambiguity at turn-in. The weightier steering is a revelation, and it delivers a genuine sharpness and quickness that’s just a notch or two behind handling greats like the Mazda MX-5 Miata and Toyota 86.

The stickier Corsa tires (265/40R vs 255/40R) and 0.9-inch wider track, along with the 3.55:1 limited-slip rear axle, give this Mustang loads of gripping power. Engineers quote a lofty 1.0 G of maximum lateral grip with the Handling pack. For reference, the Shelby GT350 does 1.09 Gs on the skidpad. And the six-speed manual, as equipped on our Handling pack tester, is pretty slick to operate, not to mention it’s a major improvement over the 10-speed box.

The Mustang EcoBoost HPP with the Handling package offers serious gains over the standard HPP in the cornering department. Up the twisty pavement of California 1 state road, the car gives off unyielding confidence.

The cheapest way to get into a Mustang EcoBoost HPP is by purchasing the $26,670 base coupe first. Adding the high-po package tacks an extra $4,995 onto that, bringing the total cost to a reasonable $31,665 (before taxes and fees). Assuming you want the Handling package as well (which, you do), then that'll add another $1,995 to the sticker. In all, the Mustang EcoBoost HPP with the Handling pack will set you back a mere $33,660 before a la cart options. That's an extremely reasonable price for a car this good.

The Focus RS engine and Mustang GT Performance pack's handling bits turn the merely okay Mustang EcoBoost into something great. Not only is the HPP genuinely quick, it's agile and sharp, as well, and comparable to other great-handling cars in the class. It's no straight-line menace like the Mustang GT, but fans of flingable, four-cylinder sports cars now have a brilliant new prospect in the EcoBoost HPP.