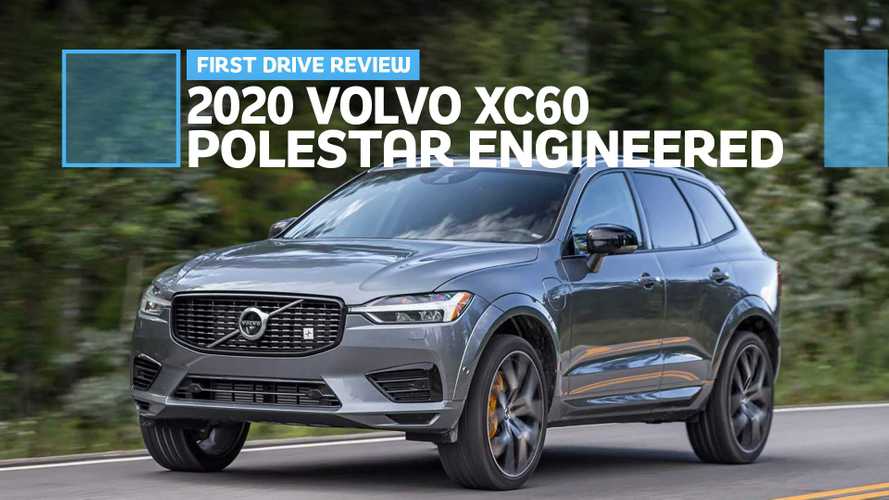 For all the love that the current crop of Volvos get, nobody’s calling them the most exciting vehicles in their respective classes. The XC60 compact luxury crossover SUV might have a stunning interior and the best looks in the class, but the word “fun” doesn’t quite come to mind. Enter the 2020 Volvo XC60 Polestar Engineered, the Swedish company’s attempt to bring some liveliness into the compact luxury crossover segment.

Polestar, the new brand of electrified performance vehicles under the same corporate umbrella as Volvo, isn’t quite off the ground yet. Volvo has released teasers of the electrified grandeur to come, but consider this Polestar Engineered product an appetizer to hold us over.

The formula is pretty simple. Retune the XC60 T8 model to squeeze an extra 15 horsepower from its plug-in gasoline-electric powertrain, which brings the total system output to 415 ponies. Add some structural bracing and Öhlins dampers to help in the twisties. Then, round it all out with a set of Akebono brakes to bring everything back down to legal speeds.

If that all sounds familiar, it’s because Volvo did the exact same thing with the S60 Polestar Engineered. That compact luxury sport sedan, which was limited to 20 examples in the United States, sold out in 39 minutes. That doesn’t teach us a lot about the demand for hot Volvos, but it certainly wasn’t fulfilled by 20 cars. Volvo expects to sell “significantly more” Polestar Engineered XC60s. You’ll also be able to buy one outright, a departure from the subscription-only model of the S60 Polestar Engineered and a welcome change.

So the interior is largely the same high-quality cabin found on most new Volvos but with a slightly sporty flare. As we’ve said about every new Volvo since the second-generation XC90 debuted in 2015, the interior is a lovely place to be with a modern design and high-quality materials. The seats are still great, the leather is still fantastic, and the Sensus infotainment system remains divisive.

I have long been a fan of Sensus and its smooth scrolling and pinch-to-zoom functions. It also supports Apple CarPlay and Android Auto, should you fall into the anti-Sensus camp. Some are opposed to the idea of touch-based infotainment as a concept, but nothing I need while driving is more than a tap or two away. The Polestar Engineered also offers the same Bowers and Wilkins premium audio system you get on Inscription models, with its trick concert hall mode and extremely clear sound.

And if you’ve spent time in any recent Volvo, you’ll find the Pilot Assist semi-autonomous driver aid familiar. Automatic emergency braking and lane-keeping assist come standard. With Pilot Assist enabled, the XC60 in all forms is a capable highway cruiser. The seats are unbeatable and the cabin is a great place to spend time, but there’s still more road noise than I’d like. When passing, you’ll also hear a groan from the powertrain that doesn’t sound particularly sporty or sonorous.

Speaking of which, the powertrain is fundamentally the same as the one in the XC60 T8. Volvo sticks a supercharger and turbocharger onto its 2.0-liter four-cylinder and sends power to the front wheels via an eight-speed automatic, while an 87-horsepower electric motor, fed by an 11.6-kilowatt-hour lithium-ion battery, powers the rear wheels. The full system is capable of 415 horsepower and 18 miles of all-electric driving. The Polestar Engineered model can sprint to 60 miles per hour in just 4.9 seconds and reach an electronically limited top speed of 140 mph.

On the road, the Polestar is quick on its feet. The electric motor provides a hefty shove as soon as you stomp on it, but the combination of electric torque, gas power, the goings on of the turbo and supercharger, and an automatic transmission means that power delivery can be unpredictable. If you catch the plug-in powertrain off guard, you’re likely to experience moments of lag. Once all of its systems are contributing to forward thrust, though, the Polestar hauls.

It’s also composed. The Öhlins dampers are adjustable mechanically, not electronically. That’s a weird choice on the face of it for such a high-tech Volvo, but the company wanted to use Öhlins dampers, in no small part because both companies are Swedish. Öhlins hasn’t made an electronically adjustable set of dampers for a car yet, so you’ll have to wrench on these yourself to adjust damping strength.

Or you can leave them as they come from the factory. In the normal street setting, the dampers provide excellent body control and secure handling. They’re noticeably firm, but not harsh or unbearable on broken pavement.

The Öhlins dampers are adjustable mechanically, not electronically. That’s a weird choice on the face of it for such a high-tech Volvo.

Steering is precise and well-weighted, but there’s not a lot of feedback through the wheel. The brakes are notably improved from the last XC60 T8 I drove, which had a squishy and nonlinear feel to the brake pedal. Even still, this isn’t the same driving experience as ultra high-performance crossovers from Mercedes-Benz and BMW. With its electrified drivetrain and minimalist, Scandinavian interior, the XC60 Polestar Engineered feels different from other sporty crossovers.

Volvo set up for us a slalom course and a moose test simulation on an airfield. The XC60 Polestars there had their dampers in a more aggressive setting, showing off the Volvo’s extremely flat cornering and confident braking. It was impressive, but we highly doubt most owners will ever fiddle with the dampers before a spirited drive.

But again, you probably don’t need to. The XC60 Polestar Engineered is well-tuned for street driving with occasional bursts of fun, like an S-line Audi or an M-Sport BMW. It’s not a machine designed for the track, but it may just be the dose of liveliness and fun Volvo could use.