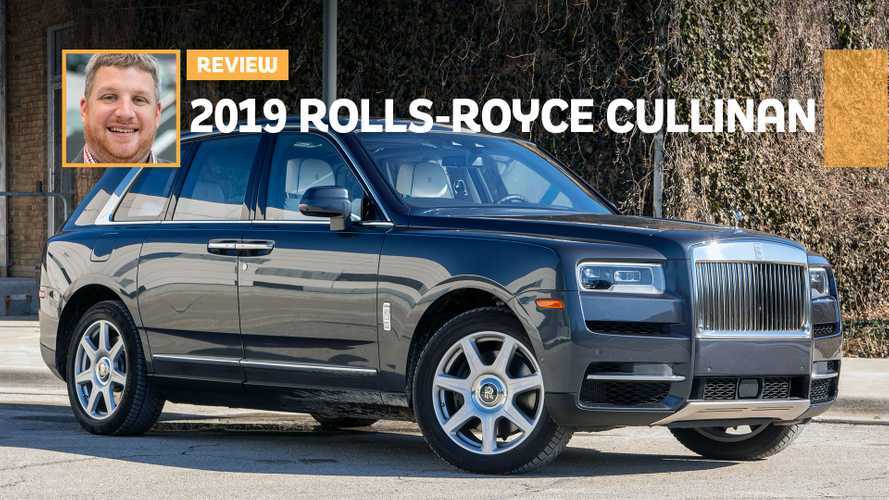 I had an argument with a buddy shortly after I drove the Rolls-Royce Cullinan. He works in finance and regularly finds himself rubbing elbows with the wealthy sort of folks that could drop $400,000 on a car without blinking an eye. He was adamant that the Cullinan didn't make sense, that it was merely a statement-maker for the nouveau riche or people who fancied themselves as such, and that none of the one percenters he regularly interacts with would buy one.

I, on the other hand, argued that Rolls-Royce and its parent, BMW, are successful companies that made billions knowing how to build cars that are popular and competitive. I said Rolls-Royce can't build the Cullinan fast enough – this one's not really open for debate – and that neither the folks at Goodwood nor their owners in Munich would have greenlit such a product if there weren't a market for it. He stood his ground, though, and continued to argue that his wealthy clients would never have one.

After a long weekend at the wheel, I want to find these well-heeled people and ask a simple question: What the hell is wrong with you?

No, seriously. If you have the means to buy a Cullinan, why haven't you? Why aren't you calling your money person and withdrawing $400K? Sell a couple pieces of art. Skip your summer in Nice. Fly commercial for a year. The Cullinan is an ultra-luxury vehicle, but it has an accessible and approachable character that's rare at this price point. It's an extravagance like any Rolls-Royce, but you'll want to use the Cullinan every day, rather than just tossing the keys to your chauffeur. Because at its core, the Cullinan marries all the attributes that make crossovers the most popular body style on the planet.

The Cullinan is big and tall, but still manageable. Whereas a Phantom feels supersized at almost 19 feet in length (mainly because 19 feet of car in a sedan body is huge nowadays), the 17-foot-six-inch Cullinan is only six inches longer than a short-wheelbase Cadillac Escalade. It's about the same length as a Lincoln Navigator. The Cullinan is unquestionably a large vehicle, but if you're comfortable driving a full-size SUV, then you'll get on well behind the wheel of this Rolls.

The 17-foot-six-inch Cullinan is only six inches longer than a short-wheelbase Cadillac Escalade.

From the front row, both the driver and passenger look out on an impossibly long hood. While the common folk might view the iconic Rolls-Royce hood ornament as little more than an ostentatious detail, from behind the wheel, it's a vital reference point for where the Cullinan ends. Also, it's hard to drive and not focus on the Spirit of Ecstasy. The little chrome statue is as much a useful tool as a constant psychological pat on the shoulder. Whether I was driving on the freeway or sitting in the McDonald's drive-thru (you're damn right I took a $420,000 Rolls to get a Shamrock Shake), seeing the chromed lady on the Cullinan's nose made me feel like I'd arrived.

Much of the Cullinan's highway goodness is down to its positively sublime suspension. Take a big, mean, nasty pothole – we have many to choose from here in Detroit – and even it can't disturb the suspension of this Rolls, which effortlessly shrugs them off. For a bit of context, we took a look at the Cullinan's ride and compared it to a normal, common luxury crossover – an Infiniti QX50. Check out the video to see how much smoother and quieter the Cullinan is than a normal crossover.

The Cullinan is able to ignore bumps and imperfections as easily as I ignore my gym routine, but it's much quieter while doing so. Once you press the button to swing the big, heavy doors shut automatically – an over-the-top touch if there ever were one – you enter the world of Rolls-Royce, where common annoyances simply stop existing. Following the aristocratic “thwap” that comes with shutting the doors is silence (or near silence). This SUV is like a V12-powered set of Bose noise-canceling headphones: potholes barely register, while wind noise and tire roar are simply nonexistent. You'll never hear them. Ever.

Settle into the big, cushy seats, and – if you're not driving – kick your shoes off and bury your feet in the decadent lamb's wool floor mats. The Cullinan is supremely comfortable in any seat, with each of the four spots in this test model (five come standard) serving as an ideal place to cover a distance.

Rolls-Royce layers wood and leather and chrome throughout the cabin in a way most brands could never hope to. The thin-rimmed steering wheel with its wood spokes (why aren't there more automakers doing wood-covered steering wheel spokes, they're classy as hell), the wood and lacquered-leather dash, and real-metal controls and accents are all stunning. Every switch, knob, and touchpoint feels like it will last 1,000 years, at which point it'll only need a simple squirt of oil to continue functioning. When it comes to rock-solid build quality, Rolls-Royce is the ruler by which other automakers are measured.

Unlike a Phantom, the Cullinan's driver's seat is the place to be. Unlike the Wraith or Dawn, though, that goodness doesn't come at the expense of the second row. There's an immense amount of space, regardless of whether you order the four-seat Individual configuration or the five-seat Lounge setup. You want the four-seat setup.

I didn't fill the Cullinan's crystal decanter with a good Scotch, but I considered it.

Aside from the added luxury of not having to rub shoulders with another passenger, there are practical reasons to go with the four-seat setup. Rolls-Royce separates the cargo hold from the main cabin with the four-seat configuration, so not only does the four-person Cullinan feel just a smidge more car-like, but the $17,500 option makes the already tomb-like cabin just a little bit quieter.

The individual seats have a greater range of adjustability relative to the three-across bench, not to mention an unmovable center partition. While the wood tray tables and pop-out iPad-style screens (an $8,000 option) are available regardless of Cullinan configuration, only the four-seat setup has a champagne chiller and flutes, a decanter, and a pair of rocks glasses available for backseat passengers. I didn't fill the decanter with a good Scotch, but I considered it.

Also, if there'd been scotch in the car, I wouldn't have felt okay exercising the Cullinan's 6.7-liter, twin-turbocharged V12. (For what it’s worth, Rolls-Royce insists on calling the 6,749-cc engine a 6.75-liter unit.) This delightful engine churns out 563 horsepower and 627 pound-feet of torque, which is so much power that the Cullinan's roughly 5,864-pound curb weight barely matters. Stand on the throttle and the Rolls surges forward like a battleship at flank speed. The Cullinan feels almost impossibly quick and effortless for its size. It was good when I first tested it in Jackson Hole late last year, but the sheer ease that this car builds speed is addicting in the real world.

Taken together, the Cullinan is a shockingly easy vehicle to live with. It's not a particularly cheap one, though. Starting at $325,000, our tester added a Mercedes-Benz S450's worth of options, for an as-tested price of $420,630. The highlights of that figure include the $17,500 Individual seating configuration, the $8,000 Rear Theater configuration, a $9,950 Rolls-Royce Bespoke audio system, $2,075 for adaptive cruise control, and $4,500 for an uplit Spirit of Ecstasy. But that's merely the functional stuff.

The Cullinan feels almost impossibly quick and effortless for its size.

Aesthetic upgrades start with $6,000 for Bespoke editing, which grants access to a host of visual upgrades. The wood trim – a stunning open-pore Mimosa Negra – costs $3,000, and then this tester extends the wood trim beyond its standard boundaries at the cost of $8,300 (for the entire dash, as well as the steering wheel spokes). For the stunning Turchese blue piping and stitching on the Arctic White leather seats add $6,100. The lamb's wool floor mats are worth all $1,500 Rolls-Royce demands for them, while the Rolls-Royce monogram on the headrests adds $1,400.

But frankly, all of those things are worth the price. The Cullinan, even at $420,000, feels like a value. You can use this vehicle every day. Easily. And without thought. During my weekend with it, I hauled stuff in the 18.6-cubic-foot trunk, I commuted in rush-hour traffic (I've never seen Detroit drivers so respectful of another vehicle as they were to me while driving the Cullinan), and then I took my wife and two friends to Sunday brunch. And then at the end of each day, I spent time staring at this $420,000 SUV in my driveway. No doubt it made my bungalow look infinitely classier. And doing all of these things felt completely natural in the Cullinan (well, maybe not the bungalow part). At the same time, the Cullinan excels at all the things a Rolls-Royce should. It felt better every mile I drove it. Hell, I felt better every mile I drove it. People stared, some waved, and almost all of them smiled. Like any Rolls-Royce, the Cullinan makes a statement. The difference is that it's much more than just a statement maker.