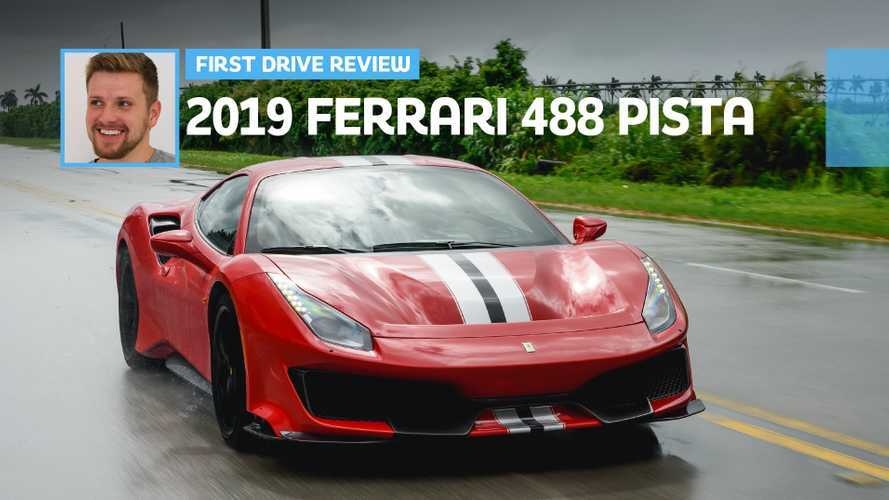 This is Ferrari without limits.

The Ferrari 488 Pista is Maranello's latest V8 powerhouse – and on paper, its most extreme. Not even predecessors like the 360 Challenge Stradale, 430 Scuderia, or 458 Speciale turned the dial up this far. With more track technology than any road-going Ferrari before it, and the brand's most-powerful V8 underhood, the company calls on us to "see what Ferrari can really do with no limits." So we hit the track to find out.

The Pista's heart is its twin-turbocharged 3.9-liter V8, and it’s as if Ferrari sculpted the bodywork and structural components around this engine. At 710 horsepower and 586 pound-feet of torque, the Pista bests its siblings – the 458 Speciale and 488 GTB – by 115 and 50 horses, respectively. Getting to 60 takes a manufacturer-estimated 2.9 seconds, to 124 it takes just 7.6 seconds, and flat out, the Pista will sprint to 211 mph. Bottom line: this car is mind-bendingly fast.

The engine block is a carryover from the 488 GTB. But half of the Pista's components are brand new and derived from a few of Ferrari's race cars, most notably the track-only 488 Challenge. In fact, the Pista's V8 shares as much in common with a Ferrari Challenge car as it does a standard 488.

Buried in the engine bay is a thinner exhaust manifold and lighter crankshaft, which yield better compression and improved sound. New alloy connecting rods reduce the engine's weight by 3.7 pounds, and thinner walls on the cylinder liners not only shed weight but reduce friction, too. The technical components of this engine are impressive – and far too lofty to list in a single paragraph. But the end result is a 40-pound weight loss and a V8 that performs unlike any other.

On the starting line of Homestead-Miami Speedway, where we’re invited to sample Ferrari's Corso Pilota customer program, we slink into the Alcantara driver's seat, greeted by a steering wheel that looks ripped from a Formula 1 car. The complexities of the wheel make sense, given the competitive characteristics of the Pista: a red toggle switches between drive modes, LEDs on the upper portion indicate revs and shift points, even the indicators have a stable in each corner of the steering wheel, rather than behind it. But the piece de resistance is a large red stop/start button positioned perfectly under the driver's left thumb.

Even with the engine already running, it's awfully tempting to press it, just to feel that V8 stop and start up again. Instead, our instructor from the Corso Pilota program sits shotgun and encourages us to pull the huge carbon-fiber shifter behind the steering wheel – themselves ripped directly from a Challenge car – to engage first gear and hurry down pit lane.

Foot gently on the gas, and the Pista moves with surprising vigor. It's ready to attack the track, clearly. Even a peck at the throttle results in a reassuring roar from the V8 and a quick lurch forward. But just before we open it up, rain barrels down without warning as it often does in Miami. With semi-slicks and 700 horsepower, “Wet” mode is the only viable option for a few brief “feel out” laps of the track.

But even with environmental limitations, the 488 Pista feels fast. The twin-turbo V8 produces gobs of power. Peak torque arrives at just 3,000 RPM, with no turbo lag in sight, pushing power all the way to an 8,000 RPM redline. The seven-speed automatic shifts with ferocity and quickness, even at slower speeds. As we hustle down the back straight gingerly, with a modest roostertail spouting from the rear, in that fleeting moment it's obvious that Ferrari has engineered something extremely special here.

Foot gently on the gas, and the Pista moves with surprising vigor. It's ready to attack the track, clearly.

The clouds dissipate as quickly as they arrived, and finally, we're able to push the Pista. Toggling from "Wet" to "Race" mode, the 488 Pista unleashes its full race car-derived DNA. Where it was once merely quick, it's now absolutely menacing. Few cars feel this dramatically different with just the flick of a switch.

Apply nervous pressure on the gas pedal and the Pista sprints forward, the noise of the engine now louder and more pronounced, and with a noticeable deep burble that emanates from behind the driver's head as we roll the Pista onto the track.

In dry conditions, down the same back straight where we rooster-tailed just minutes earlier, the LED lights on the steering wheel bounce from left to right, almost too suddenly for us to shift in time. Carrying more speed, head plastered into the seat, a quick glance at the speedometer shows speeds once unthinkable on the same wet track. But before we can even blink, a braking zone.

Stand on the big Brembo brakes (15.6-inch rotors up front, 14.1 inches in the rear) and the 488 Pista doesn't buck an inch. The brakes never fade, either, even after hours on the track, and the inclusion of a master cylinder that shortens the pedal distance, borrowed from the Challenge car, provides more confidence in the corners. Where lesser cars might wag their tails in pursuit of grip, or simply because there isn’t enough downforce, the Michelin Pilot Sport Cup 2 tires and extra pressure keep the Pista planted, presenting the perfect angle for turn-in almost every time.

A tiny steering input is all it takes to position the 488 Pista perfectly for the corners of Homestead-Miami’s roval. Even sharper angles of the track don’t necessitate huge degrees of movement as the Pista moves confidently with just a touch. Turn the steering wheel more than 90 degrees in any direction, our instructor notes, and you’re doing it wrong.

The active aero does a phenomenal job keeping the car planted. Instead of the 488 GTB's gaping grille, the Pista borrows Ferrari's F1-inspired (and patented) S-Duct up front. The dead-sexy design detail doesn't just up the Pista's presence, it forces oncoming air upwards, over the roof, and towards the trick active spoiler and other aero bits out back. As a Ferrari spokesperson notes, "follow the stripes."

The tri-colored silver-and-blue paint down the center of the vehicle indicates airflow, as do the new side sills and profile details, which push that same air into the side intake and out and over the wheels. The end result of all that aero work is 20 percent more downforce than the GTB and a mere two percent increase in drag. At 3,053 pounds, the Pista is 176 pounds lighter than the GTB, too. Thank the new carbon-fiber hood, bumpers, intake, and rear spoiler.

Frankly, photos don't do this car justice. The intricacies of the aero work paired with the 488 GTB's natural beauty blend seamlessly, resulting in one of the most visually compelling Ferrari products to date. The LaFerrari and F12tdf may look more dramatic, but the 488 Pista feels more visually complete, with extreme attention to detail and thoughtful styling up close. Every crease and angle has a designed purpose.

The 488 Pista is the perfect sequel to the GTB's impressive first act, and a fitting follow-up to the 458 Speciale and 430 Scuderia.

The Pista's compact 104.3-inch wheelbase yields near-perfect proportions. The new 20-inch carbon-fiber wheels aren't anything special from afar, but the tight weave, subtle copper sheen, and thin spokes look phenomenal up close. And then there's massive rear diffuser, which itself looks like something off a Challenge car.

Where Ferrari engineers added complexity to the engine bay and exterior, they subtracted it in the cabin. The vast amount of carbon fiber inside makes you wonder how other manufacturers still have access to the stuff: carbon covers the instrument cluster, door panels, and center console bridge. Even the seats are carbon fiber. Alcantara and leather coat much of the rest of the cabin, and in this case, Ferrari tosses the optional floor mats aside in place of factory aluminum floor plates. Because race car.

But even for as track-focused as the 488 Pista is, it’s surprisingly pliable on the street. The car putts around pleasantly on the public roads just outside of the track. Tech like Apple CarPlay and navigation comes standard, thankfully, and even though the suspension is about 10 percent stiffer than the GTB, a softer, selectable setting for the adaptive dampers improves ride quality, and the normal drive mode keeps the engine calm-ish. It’s easy to see how one could live with this car every day, and turn heads in the process.

Ferrari calls the 488 Pista "a real racing car." We won’t go that far. Rather, we praise the Pista for its raucous V8 and unrivaled cornering and braking abilities. It’s a phenomenal track car by any definition. But it's also a solid road car, too, with a suspension setup that’s tolerable over rough pavement and available tech that makes it easy to live with every day.

The 488 Pista is the perfect sequel to the GTB's impressive first act, and a fitting follow-up to the 458 Speciale and 430 Scuderia. It's a track-focused, street-legal Ferrari unlike any other, and every bit as good as advertised.