Lighter, more powerful, and even better to drive than the GTB it’s based on.

No sane person ever stepped out of the Ferrari 488 GTB and muttered, “I wish it had more power, less weight, and could make me look like a drifting guru.” And while we’d stop short of questioning the sanity of Ferrari’s engineers, there’s no doubt that they think rather differently to the rest of us. Hence the arrival of the Ferrari 488 Pista, the next evolution of Ferrari’s mid-engined V8 sports car. Guess what? It’s more powerful, lighter, and can help you look good on the race circuit.

See how quick it really is: 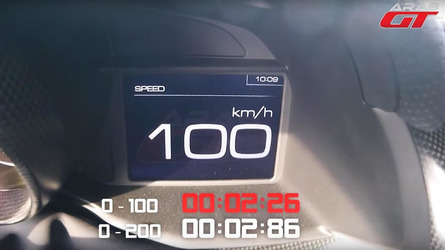 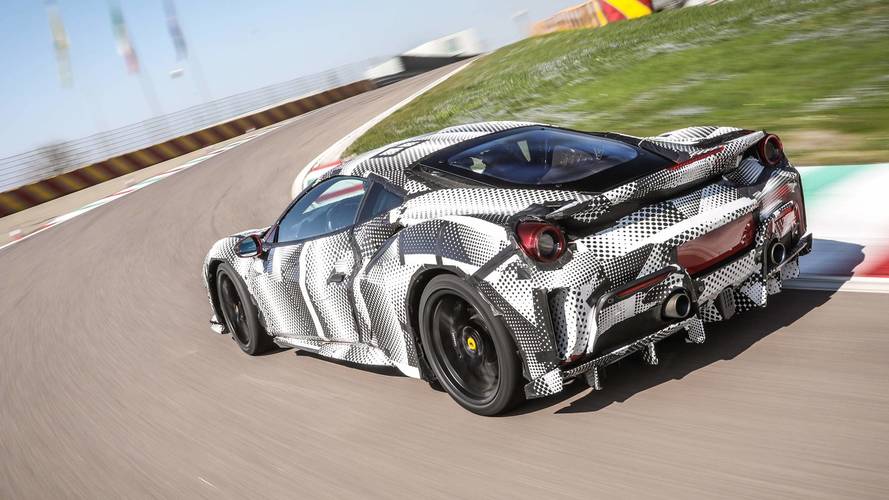 You’ll have to seek out our gallery of the new Ferrari 488 Pista at its unveiling to see what it looks like finished, as this test drive was conducted at the wheel of a pre-production engineering prototype, wrapped in a vaguely trippy black-and-white design. That can’t disguise the sharper lines of the Pista, though, nor the enhancements that have lead to a 20-percent improvement in aerodynamic efficiency.

The biggest talking point is what Ferrari calls the ‘S-Duct’ up front, which means a completely new front end. Some of the air hitting the nose goes through the bumper and exits over the plunging hood line, creating downforce with very little extra drag. Ferrari says it took other aerodynamic ideas from its 488 GTE racer, and yet the Pista manages to look more menacing than the GTB without any unsightly additions – it’s a spectacular piece of design that manages to meld all that function with a jaw-dropping form. Make sure you go for the stripes.

Carbon fiber features in the new bodywork to reduce weight, while the rear window is now a Lexan item, but if you want the lightest Pista (some 198 pounds lighter than the GTB) then you need to go for the optional new 20-inch carbon fiber wheels, as these are 40 percent lighter than the GTB’s. They also look exquisite, natch.

The interior of the Pista isn’t too far removed from that of the GTB. More weight has been taken out by eliminating the glovebox, but hey, you’ll be wearing your driving gloves anyway, right? The test car featured lightweight bucket seats with manual adjustment and rather necessary four-point harnesses. As in the GTB, there’s a chunky leather and carbon fiber steering wheel with a little too many buttons on it, although all is forgiven for the design and tactility of the Manettino drive-mode switch and the inclusion of a sequence of heartrate-increasing shift lights embedded in the top of the rim.

Apparently, you’ll find 6.0 cubic feet of luggage space, some storage pockets, and Apple CarPlay, as well, but you’ve stopped reading now and you’ve moved onto the next section, haven’t you? 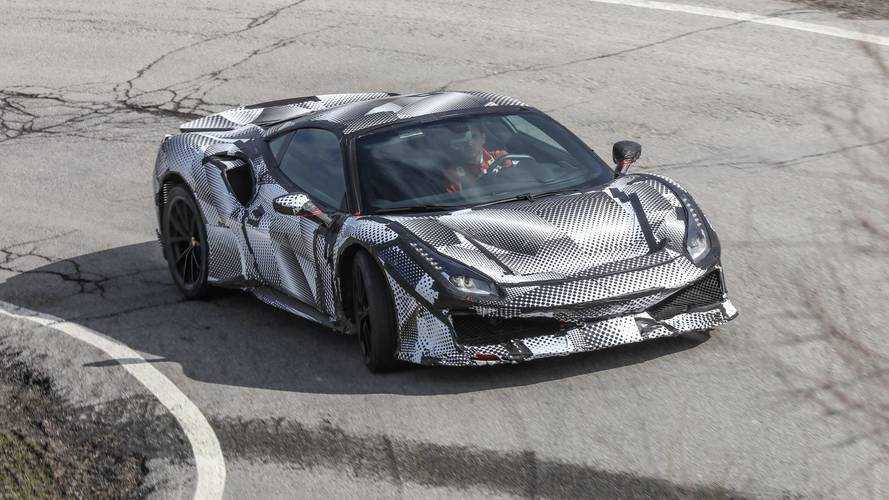 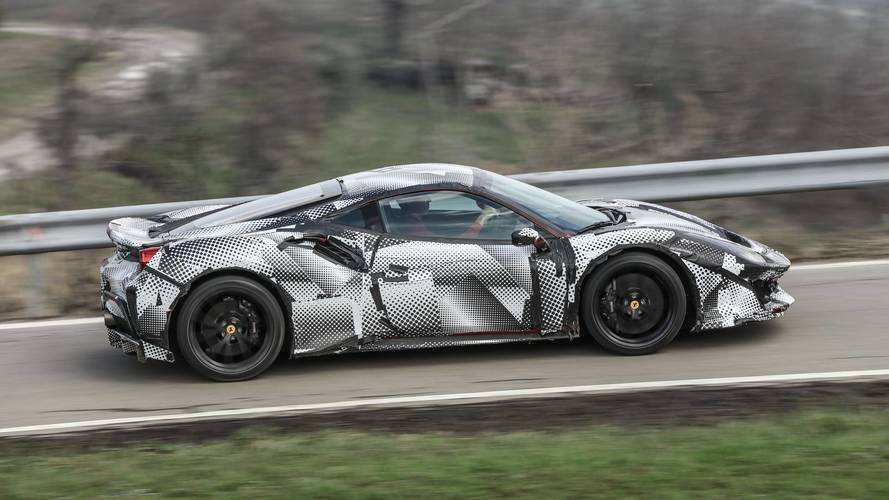 There’s a 50-percent-new, biturbocharged 3.9-liter V8 in the middle – how do you think it drives? It makes a gobsmacking 711 horsepower (at a screaming 8,000 rpm) and 568 pound-feet of torque, making it the most powerful V8 engine that Ferrari has ever made. That’s all sent to the rear wheels via a re-calibrated seven-speed dual-clutch transmission and Ferrari’s fiendishly clever active differential. “Fast” doesn’t cover it, and while a 0-62-miles-per-hour time of 2.85 seconds and a top speed “in excess” of 211 mph are worthy of entry to any supercar club, it’s the way the Pista uses that performance that makes it truly special.

Like all the best modern high-performance cars, it’s all about the driving modes. We tried the Pista on potholed urban roads with speed bumps and slow traffic in the rain and, in Wet mode, it was docile, easy to manage, and even acceptably pliant thanks to the softest setting of the adaptive damping. Meaningful acceleration is only ever a foot flex away (and there’s nothing that you could call turbo lag to deal with) and yet you don’t live in fear of using the throttle lest you spin your £250,000 sports car into the undergrowth; such is the traction and communication on offer. The only advantage the GTB has over the Pista on the road is more sound deadening, meaning less road noise gets into the cabin.

But it’s not like anyone is going to commute to work along the highway every day in the Pista, is it? Ferrari expects owners to drive it for the sake of driving it, and sometimes on a circuit. Thankfully, the rain had stopped by the time it came to try the Pista at Ferrari’s famous Fiorano test track in Italy. 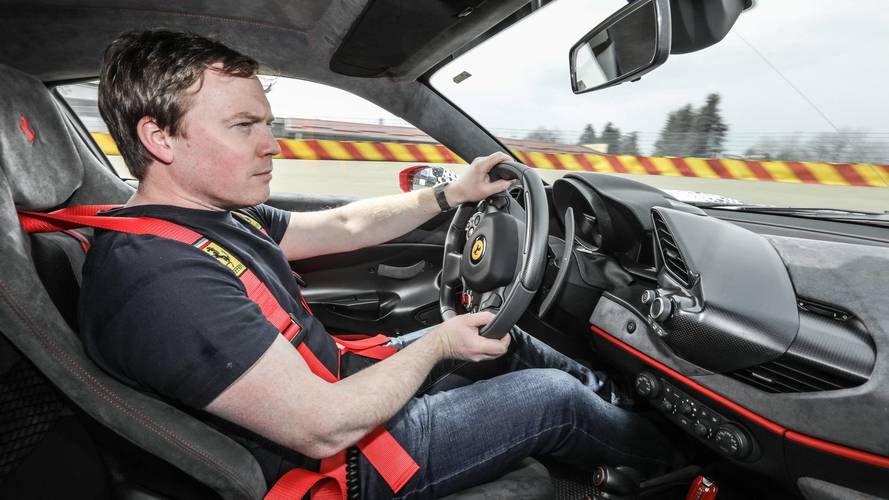 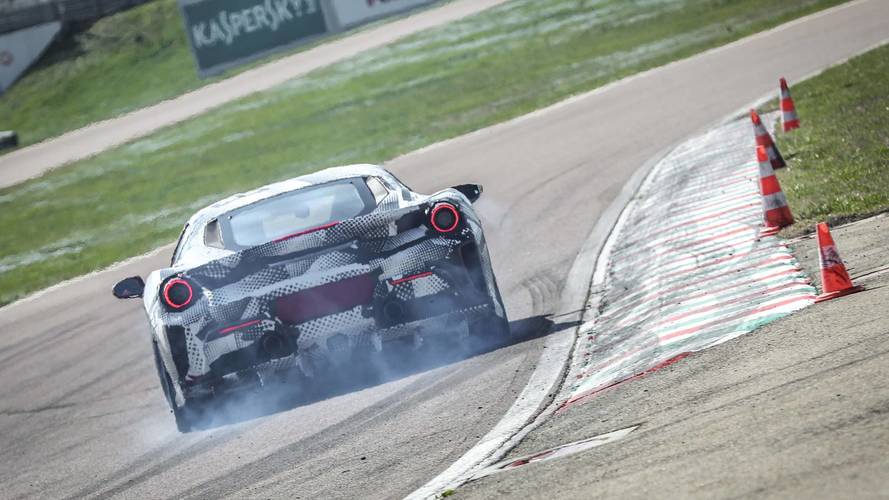 Here, it’s time to twist the Manettino around to Race mode. That implements an even faster gear-changing calibration that is incredibly aggressive and makes the most of the stiffer suspension. Throttle response is razor-sharp and you have to raise your game to keep up with the need for upshifts as the car bolts down the straights, devouring the track and gears in equal measure. Through all this the new Inconel exhaust manifolds sing a spine-tingling roar that is nothing short of racecar exciting as the engine homes in on its abrupt rev limiter. It’s louder than the GTB and sounds less turbocharged and more big-engined. Response to throttle input feels that way, too.

The rest of the car is just as impressive, from the uprated brakes, which feel perfect beneath your foot and stop the Pista time and again from high speeds with alarming retardation, to the exceptional body control through fast direction changes and, perhaps most of all, the way it involves the driver in the whole experience. The noise, response, and power make it immersive for sure, but once you acclimatize to all that you realise that the direct steering is telling you plenty about what’s going on at the road/track surface. This allows all to enjoy it and feel confident pushing up to and beyond the brutal limits of grip.

To that end, the Pista is the company’s first road car to benefit from Ferrari Dynamic Enhancer (FDE), part of the descriptively named Side Slip Control system. FDE uses the brakes not to stabilise the car for safety as such, but to help keep things moving in the right direction, as quickly as possible, even when that’s in the form of a powerslide. According to Ferrari, it means drivers can “easily handle even lengthy oversteer situations.” On track only, obviously…

Odds are that, if you’ve can afford such a plaything, and Ferrari is your jam, you have already placed your order and you’re counting down the days to delivery. If not, then you could be waiting a while, as these special series models are in high demand and, though production is not technically limited to a fixed number, the Pista will only be manufactured for a couple of years. Alternatives include the Lamborghini Huracan Performante and Porsche 911 GT2 RS, but we’d be willing to wait the longest for the Ferrari.