The 2019 Hyundai Veloster N is still more proof there’s not an automotive segment in which the South Korean brand can’t succeed. Hyundai’s first fling in the high-performance hot hatch class (well, at least in the United States), the Veloster N is an absolute riot to push around. Moreover, the 250-horsepower hatch is also a hell of a deal thanks to a base price of $26,900 (opt for the $2,100 Performance pack and the turbocharged four-cylinder puts out 275 horses).

First Takes On The Veloster: 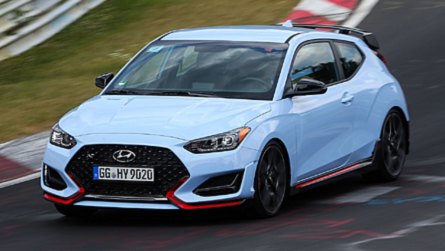 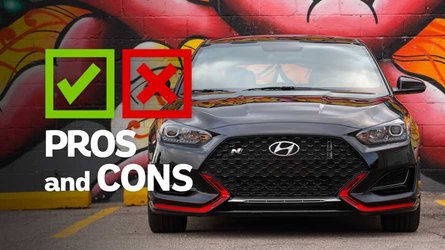 While its mighty power and big rear wing give it the theoretical credentials to battle the $35,700 Honda Civic Type R, the reality is that the Veloster N is not Hyundai’s analog to the high-performance Honda hatchback. At 167.9 inches long, it’s nearly a foot smaller than the Type R. The N’s interior is also far chintzier than the Honda’s. No surprise, really, given the $8,800 price gap between the two cars.

Instead, it's best to view the Veloster N as the unofficial successor to the soon-departing Ford Fiesta ST. Like the Ford, the N is small, nimble, versatile, and fun to drive. Most of all, though, it’s a performance bargain.

Given the entry-level Hyundai Veloster starts at $18,500, the Veloster N’s $26,900 base price may initially seem a tad high. But the Veloster N is no ordinary Veloster, and the performance-oriented model bests its base counterpart with a host of performance upgrades. Power comes courtesy of a 250-horsepower turbocharged 2.0-liter four-cylinder engine. That’s 103 horses more than the naturally aspirated 2.0-liter that powers the base Veloster offers. Additionally, the N includes standard 18-inch wheels wrapped in Michelin Pilot Super Sport summer tires, a set of big 13-inch front and 11.8-inch rear Brembo brake rotors, adaptive dampers, and an N-specific steering setup.

If the standard Veloster N takes Hyundai’s hatch and turns it up to 10, then the Veloster N with the Performance package twists the dial up to 11. The $2,100 option adds 25 horses to the stable (for a total of 275), an angry-sounding variable exhaust system, a set of 19-inch wheels wrapped in sticky Pirelli P Zero summer rubber, even larger 13.6-inch front and 12.4-inch rear rotors, and an electronically controlled limited-slip differential to the N.

With the Performance package installed and $920 worth of destination tacked on, this Veloster N rings in at $29,920. That’s not cheap, but it’s notably less expensive than the less powerful, similarly sized, 228-horsepower Mini John Cooper Works Hardtop, which starts at $32,750 including destination. That said, leasing a Veloster N might not be the best bet...

With its rather large rear wing and plethora of (both fake and real) vents, the Veloster N’s looks aren’t for everyone. That said, the Veloster N’s design is sure to appeal to a certain set of buyers. While its styling is a smidge over the top, it isn’t gaudy (cough, Civic Type R, cough). Tasteful LED low-beam headlights and taillights complement Hyundai’s now-ubiquitous cascading grille design, while the Veloster’s front and rear fender lines emphasize the car’s wide hips and big wheels, resulting in a look that’s as dynamic as the Veloster’s powertrain and chassis.

Less endearing is the Veloster’s interior. Lined in cheap and chintzy plastics, the cabin is passable in a sub-$20,000 vehicle; less so in one nearing $30,000.

Still, Hyundai equips the Veloster N with a handful of model-specific details to remind consumers this is the top-dog in the Veloster family. As such, the car sports N-badged seats, a three-spoke steering wheel with big drive mode buttons on the left and right side spokes, a model-specific gauge cluster with built-in shift lights, and a chunky shift lever for swapping between the gearbox’s six forward gears.

The Veloster N is more comfortable than its performance credentials might lead you to believe. With the adaptive dampers in their softest setting, the hot hatch’s ride remains relatively composed over bumps and pockmarked pavement – a fact that’s even more impressive given this tester’s 19-inch wheel and tire combination. Exterior noise is well suppressed, too. Provided you’re gentle with the throttle that is, otherwise the exhaust’s noises infiltrate the cabin with all the subtlety of a pair of Game of Thrones fans eagerly discussing last week’s episode.

Accompanying the Veloster N’s surprisingly forgiving ride are a pair of well-bolstered and nicely cushioned front seats. While the two-person rear bench seat isn’t the definition of roomy, it’s more spacious and comfortable than the Veloster’s small size suggests. Having only one rear door, however, remains a hassle for getting into the left-side rear-passenger seat. Hyundai would be wise to put a rear door on the driver’s side of the vehicle, as well.

Cargo capacity stands at a reasonable 19.9 cubic feet with all seats in place. Folding the rear’s opens up even more space for larger items. Although space within the Veloster N’s cargo hold is reasonable, it’s opening is quite small, which makes it difficult to load bulkier items into the N.

Out of the box, the Veloster N comes standard with a proximity key with push-button start, automatic climate control, and an 8.0-inch touchscreen infotainment system that’s Apple CarPlay and Android Auto compatible. As in other Hyundai products, the Veloster N’s infotainment system is user-friendly and features crisp graphics, sensible menu structures, and a handful of dash-mounted hard buttons to easily access important functions.

While the standard kit is quite impressive, the Veloster N falls somewhat flat in this category due to its lack of optional comfort and convenience items. Want the Veloster Turbo Ultimate’s in-dash navigation system, or heated seats, or a heads-up display? Tough luck, because none of these features are available on the N.

The Veloster N picks up the proverbial torch the Fiesta ST dropped with its pending exit from the U.S. market. Small, quick, and a hoot to drive, Hyundai’s hot hatch checks off the key items enthusiasts seek in a budget performance vehicle.

Powering the Veloster N is a punchy turbocharged 2.0-liter inline-four that sends 250 hp to the front wheels. With the optional Performance package, though, the stable rises to 275 horses. Regardless, every Veloster N makes a formidable 260 pound-feet of torque from a low 1,450 rpm. With the Performance pack’s variable exhaust system, the Veloster N is equal parts show and go. When set to its most aggressive setting, the exhaust snaps, crackles, and pops like a demonic bowl of Rice Krispies. A standard six-speed manual gearbox with relatively short but somewhat vague throws is the sole transmission on offer (for now).

The powertrain complements a competent chassis that – in conjunction with the Performance pack’s Pirelli tires and electronic limited-slip differential – allows the N to turn-in predictably and prevents the chassis and tires from giving in to understeer until they’re pushed to lateral limits that most customers will never explore. Alas, the quick and well-weighted steering is low on feel and lacks the tactility of the more expensive Civic Type R.

Although the adaptive dampers allow a range of adjustability, it’s best to stick to the Normal setting and avoid Sport or Sport+ – the former of which engages in the car’s Sport mode, while the latter comes on in the race-ready N mode (there are also Eco and Normal modes.) In fact, it’s best to enter the N’s Custom mode and work through the 1,944 possible drive setting configurations (no, we’re not kidding) to find a setup that works best for you.

When it comes to advanced safety equipment, the Veloster N is a throwback to earlier times. With no blind-spot monitoring, automatic front braking, lane departure alert, or the like, the N relies on the driver to take the helm and avoid getting into any accidents. At least there are standard LED low-beam headlights to help properly light the road-ahead at night.

Given its performance, the Veloster N’s EPA-rated fuel economy figures of 22 miles per gallon city, 28 mpg, and 25 mpg combined are rather impressive. They’re even more so when you consider the Hyundai runs regular fuel.