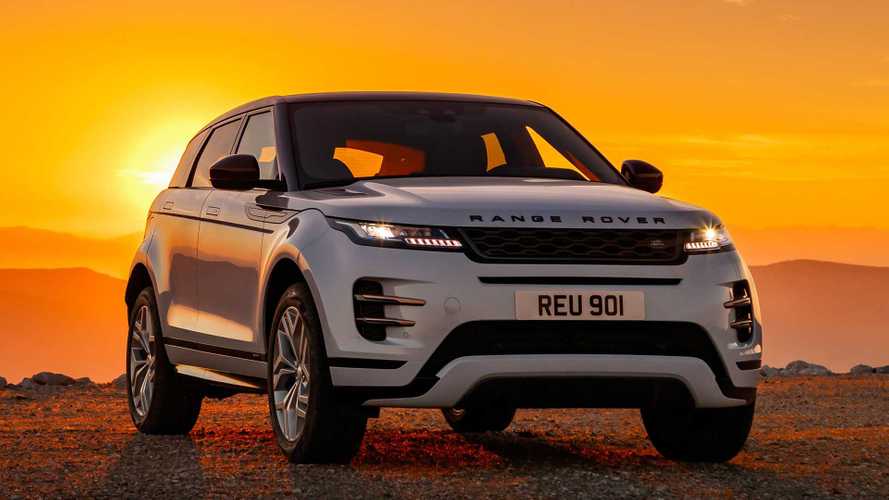 I click my seatbelt and remember Paul Newman’s famous line from Butch Cassidy and the Sundance Kid. “The fall’ll probably kill ya,” the legendary actor and racer, playing equally legendary outlaw Butch Cassidy, tells co-star Robert Redford’s aquaphobic Sundance Kid before they prepare to jump off a cliff into a rampaging river.

In this case there’s no “probably” necessary: the 300-foot fall will very much kill me, seatbelt be damned. I’m preparing to cross the Corinth Canal, an 81-foot-wide gash in the limestone of the Isthmus of Corinth, 60-miles west of Athens. But rather than crossing on the very firm, very stable, and very big motorway to the north, I’m on a rickety railroad bridge, staring at a warning sign hand-painted by someone with only a very faint understanding of what a human skull looks like. My steed for this idiotic challenge is the 2020 Land Rover Range Rover Evoque. It should go without saying, but much like the Sundance Kid, the Range Rover cannot swim (although it can ford two feet of water, so there’s that).

This was Land Rover’s idea of a “surprise.” Thankfully, it was the only one on my two-day trek through Greece, from Athens in the south to the holiday village of Kranidi, in the Argolis region of the Peloponnese. Entering its sophomore lifecycle, the latest Evoque generally improves upon the best parts of its predecessor, although in the process of redesigning its smallest Range Rover, Land Rover introduced some new problems.

While it may look similar to its predecessor, the second-generation Evoque rides on Jaguar Land Rover’s new Premium Transverse Architecture. The mixed-metal platform stretches the Evoque’s wheelbase from 104.7 to 105.6 inches and is so extensive the new body only shares its door hinges with the old platform.

Land Rover had two goals with its new platform: improve the Evoque’s noise, vibration, and harshness and prep the model for electrification. Mission accomplished on the first goal. Not five minutes after setting off from my hotel in Athens, the Evoque’s excellent noise control is apparent.

There’s virtually no tire roar, even with a larger wheel option – my tester wore optional 21-inch wheels, a first for the Evoque. Heavy winds crisscrossed southern Greece during my journey from the airport to our second hotel, and while the crosswinds made keeping the Evoque in its lane difficult, the sound of the gusts rarely entered the cabin.

This CUV is quieter, and It seems to ride better as well. The Evoque does a fine job of isolating the cabin from impacts and road imperfections, but the standard suspension setup gives the Range Rover a ponderous, oversized feel. It’s also prone to understeer. In one particularly worrying case, I applied a little too much gas exiting a roundabout (it wasn’t excessive or unreasonable throttle) and the underdamped Evoque’s weight shifted rearward and initiated sudden, unexpected understeer.

The smarter option is to pony up for the available adaptive dampers, as well as the ability to configure the suspension, transmission, engine, and steering with the Configurable Dynamics system. Priced at just $715 for the former and $355 for the latter on the base Evoque, the setup provides the Rover with a far more composed handling character that doesn’t sacrifice much in the way of ride comfort. On the winding roads heading back to Athens, I could push the Evoque with adaptive dampers far harder and with much more confidence than one with the standard suspension.

A turbocharged 2.0-liter four-cylinder, available in two power levels, is the only engine North American consumers will see. While I only drove the so-called P250 (246 horsepower and 269 pound-feet of torque), a more powerful P300 with a 48-volt mild-hybrid system and a total output of 296 horsepower and 295 pound-feet of torque is also available.

In Europe, Land Rover is attaching its 48-volt system to both versions of the turbo four. The brand will also offer a plug-in hybrid model overseas, but not in America. Considering Land Rover engineered the Evoque’s new platform explicitly to accommodate battery packs, it feels worryingly shortsighted to not let U.S. consumers take advantage of that engineering work.

It feels worryingly shortsighted to not let U.S. consumers take full advantage of the Evoque's electrification.

If you’re asking yourself whether you can get by with the base P250 or need the P300’s heftier output, you probably don’t need the extra power. The base engine has a broad, accessible torque curve that suits chaotic city streets and contributes to the Evoque’s urban-friendly character. Peak torque is available from 1,300 to 4,500 rpm, so passing power is suitable to a point. But the Evoque’s lack of high-end power calls for a more strategic driving style, especially on two-lane roads.

Sudden passes require negotiating with the Evoque’s nine-speed automatic, a likable enough transmission that maintains its composure in everyday driving but gets frazzled as it hunts for the correct gear at wide-open throttle. Eventually the software sorts itself out, realizes it’s a transmission and not a spinning loom or butter churn, and selects the appropriate cog. But its hesitation is yet another layer that makes passing more difficult than it should be. That said, I made more two-lane passes in one Greek day than most Americans make in a year, so this particular concern should only weigh heavily if you’re routinely rolling down rural roads.

The Land Rover struggles to urgently jump from 45 to 65 miles per hour, but is far more willing to move from 60 to 80 miles per hour under lighter throttle. Credit the engine’s torque curve and the transmission’s shifting algorithm. With the pedal to the floorboard (such as while passing slower traffic on a rural road), the transmission (eventually) downshifts multiple gears and rockets the engine speed toward redline. Yet, in relaxed freeway passing, the nine-speed only keeps the four-pot in the meaty part of its rev range. The Evoque has plenty of usable power for patient drivers.

My only other complaint focuses on the 2.0-liter engine’s jumpy off-road throttle response. Its off-road drive modes are supposed to dull the throttle response to help drivers modulate their inputs, but the 2020 Evoque’s modes don’t go far enough, and caused me to approach or exit certain obstacles too suddenly. Locking the transmission into second gear, as I did, solved the problem mostly, since it grants a wider range of throttle modulation.

The Range Rover Evoque still has more off-road capability than its typical owner will need in a dozen lifetimes.

That small problem aside, the Range Rover Evoque still has more off-road capability than its typical owner will need in a dozen lifetimes. The Terrain Response 2 off-road system smartly sets the off-road systems up based on external conditions. There are also separate off-road driving modes if the driver wants to exhibit more control over the software, but that control only goes so far. While the Evoque carries Terrain Response 2, a smart hold feature, and hill descent/ascent control, it lacks the hallmarks of hardcore off-roaders. Don’t come to the Evoque looking for the bigger Range Rover’s low-range gearbox or locking differentials.

What the smallest member of the Range Rover family does get is Land Rover’s innovative ClearSight Ground View camera system. Using a front-facing camera in the grille and a camera under each side-view mirror, the system stitches together a roughly 145-degree, U-shaped image of the terrain in front of the car and displays it on the top touchscreen display. Creep ahead a bit and the system fills in the U, giving the driver a clear idea of the terrain underneath the crossover’s hood. While we only had a short time with the new system, it seems like it’d be useful for more than just trail driving. The system is likely an asset in tight parking lots, too, although the filled-in image is merely a recording of what the cameras have already seen, and not a live broadcast from under the hood.

ClearSight isn’t the only camera-based trickery in the Evoque. To get around the skinny rear window Land Rover turns to a camera-based rearview mirror called ClearSight Rear View Mirror. Using a camera mounted in the shark-fin radio antenna, Land Rover’s setup feels smarter and certainly presents a higher-resolution image than similar systems I’ve used in General Motors and Nissan products. Drivers can also adjust the screen’s color and the lens’ angle for improved visibility.

That tiny rear window is just one of the many design touches that remains from the original Evoque. This is an evolutionary approach to design that’s so slow and purposeful it’s positively Porsche-like. And that’s intentional, according to Land Rover design boss Gerry McGovern, who told Motor1.com it’s important the Evoque remains immediately recognizable as an Evoque.

“There’s this preoccupation in the auto industry that every time you do a new car, it has to be completely different,” McGovern said. “Why? If you’ve got something that’s established, that people love, to me, you refine it.”

The design changes are small, but they’re still impactful.

And that’s precisely what’s happened both inside and out on the Evoque. The changes to the exterior are so subtle that you’ll have trouble telling the two cars apart from a distance. “You can tell it’s the new one by how clean it is,” McGovern said, helpfully.

But while the changes are small, they’re still impactful. McGovern and his team’s decision to ditch the plastic wheel arches is welcome, and gives the new Evoque better proportions. And the black strip across the trunk works just on the Evoque as well as it does on the larger Velar. Small changes come to the headlights and taillights, as well, while the slight stretch of the wheelbase further improves the model’s proportions.

The interior gets far larger changes dictated by McGovern’s dedication to modernity in design, which focuses on reducing clutter. Physical buttons are virtually a thing of the past, and in their place are a central bank of touchscreens. While undeniably pretty, the two touchscreens aren’t particularly responsive.

More troubling – especially on the lower screen, which controls the climate system, drive modes, and heated/cooled seats – is the lack of haptic feedback. Without some kind of response system, it’s impossible to know if the screen accepted your input without taking your eyes off the road ahead. We strongly suggested to Land Rover’s team that it should add haptic feedback to these controls as soon as possible, but we wouldn’t count on seeing this manifest itself before the Evoque’s mid-cycle refresh.

Interfaces aside, the rest of the cabin is surely familiar to any Land Rover owner. A clean, simple, horizontally oriented dash looks fantastic, while high-quality materials are available throughout the range. The P250s I drove were the base S trim with the R-Dynamic package (a configuration we can’t get in the U.S. as the R-Dynamic will only be available with the P300 engine), yet they still had high-quality leather on the dash and seats, and solid fit and finish. No matter which Evoque you buy, its cabin is going to look damn good.

But while Land Rover is calling this the second-generation Evoque, it feels more like a wildly comprehensive facelift. This is still the same, likable compact Range Rover, but the improvements the brand’s designers and engineers built into the 2020 model further enhance those qualities. This is by no means a perfect crossover. Land Rover needs to better balance its design-focused technology, because, at times, it feels like form completely overwhelms function. But the issues on the 2020 Evoque are all easily fixable. You can and should consider it now, but it's a safe bet this compact crossover will get a lot better in the future.