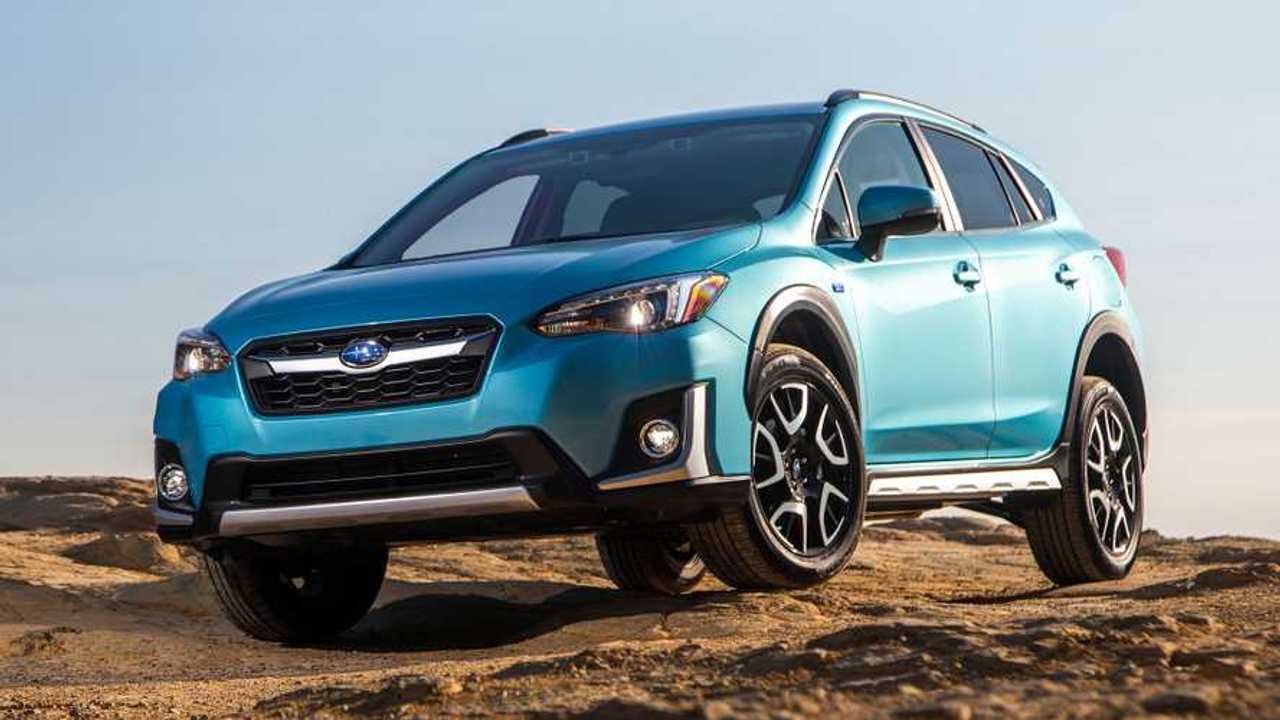 The 2019 Crosstrek Hybrid is trying to outshine the rest of the Subaru family by trying to do it all.

The first-generation Subaru Crosstrek arrived in 2013 and aimed to capture the hearts of city-dwellers that spend their weekends outdoors. Customers who desired a compact SUV (or is it a lifted hatchback?) with off-road chops to travel beyond city limits began to take note of the Crosstrek’s credentials. With each model year, it built up its stature in the market, outselling itself again and again. In 2018, Subaru sold 280 percent more Crosstreks than it did the year the car launched five years ago, making it the brand’s third-best overall seller.

2018 Subaru Crosstrek First Drive: How The West Was Fun

With the second-generation Crosstrek now a year old and selling in large numbers, the time is right for Subaru to add a new plug-in variant to the range. That’s right: though the car wears “Hybrid” in its title, owners can recharge the Crosstrek Hybrid by plugging it into a wall outlet (or at various charging locations across the country), making it the most fuel-efficient model in the Subaru family. Like any overachieving kid, the new plug-in wants to be the best at just about everything and spends a fair amount of time looking squarely at its non-hybrid sibling, sticking up its nose, and proudly teasing “anything you can do, I can do better.”

Under the Crosstrek Hybrid’s skin is an advanced powertrain with a lot to cover, even by PHEV standards. We start with a 2.0-liter Atkinson-cycle boxer engine and an electronically controlled continuously variable transmission (eCVT). Subaru tweaked those elements to work alongside two motor-generators, one positioned just behind the front axle and the other just in front of the rear axle. An 8.8-kWh lithium-ion battery pack protrudes into the Crosstrek’s cargo area and provides 17 miles of all-electric range.

Some of the Crosstrek’s plug-in hybrid technology does come from Toyota. The Crosstrek’s battery stacks, for example, are found in the Prius Prime, and the two motor generators come from the Camry Hybrid. And although it’s similar in concept to Toyota’s transmission, Subaru did develop the eCVT in the Crosstrek Hybrid. But despite these similarities, the Subaru’s always-on all-wheel-drive system falls short of the Prius Prime’s 25 miles of all-electric range.

The Crosstrek Hybrid achieves 35 miles per gallon combined and the equivalent of 90 MPG when operating on electricity alone, which clearly bests the standard Crosstrek’s combined 25 MPG. A full charge takes five hours using a standard 120-volt outlet and two hours using a 240V plug. The 2.0-liter gas engine alone is good for 139 horsepower, though total system output is 148 horsepower, with 149 lb-ft of torque available from zero RPM, thanks to the electric motors.

The Crosstrek, like other PHEVs, offers driving modes that can save and recharge the battery packs, as well as a Normal mode. The good news is that regardless of which mode you select, the Crosstrek Hybrid retains its all-wheel-drive setup – a unique selling point among plug-in hybrids, especially affordable ones. Thanks to the gas engine’s mechanical connection to all four wheels, the Subaru’s AWD system works all the time – even when the battery is drained.

Normal mode keeps the Crosstrek eco-minded with a combination of gas and EV driving, depending on its charge level and your throttle inputs. Push the gas pedal past 50 percent and the gas unit kicks in to help out. The Save mode forces the Crosstrek to, well, save its 17 miles of electric charge for later use, like after a long highway drive when you’re about to hit city streets. And lastly, Charge mode fires up the gas engine and makes it work to refill the batteries as you continue driving.

I cycled through each drive mode multiple times during my drive in and around Santa Barbara, California, noting few changes in how the car behaved switching from one mode to another. The most noticeable difference was slightly reduced acceleration in Save mode. Regardless of which drive mode you select, regenerative braking is there to help at all four corners of the car. After a brief “getting to know you” period, the regen becomes a friend, recouping energy without some of the bad manners of other regenerative brake rigs. A roughly 10-mile-long descent through the Santa Barbara mountains allowed us to regain nearly half of the electric range by the time the car returned to sea level. That’s an extreme case, but regen braking really does work to extend your EV driving range.

The Crosstrek Hybrid was less happy climbing hills, where the CVT kept the RPMs high enough that the powertrain felt stressed by its task. Aside from that concession, the Crosstrek Hybrid is a fine road trip vehicle, though it’d be smart to build up some momentum before overtaking other drivers or prior to climbing mountains.

A few hours behind the wheel left an overall strong impression of the Crosstrek Hybrid’s ride. The car is adequately comfortable cruising along the highway and navigating a dirt trail. The suspension is on the softer side, which is all the better to soak up bumps and divots. It feels good on paved roads, too, with a pleasantly detached floatiness.

Anyone that’s familiar with the Crosstrek’s cabin will feel at home in the Hybrid. The only major interior styling differences in the PHEV compared to the standard gas model are two large, blue pieces of trim adorning either side of the infotainment screen, as well as blue accent stitching on the seats and around the steering wheel.

Cargo space is down a full 24 percent compared to the non-hybrid: 20.8 cubic feet for the standard Crosstrek versus 15.9 cubic feet in the hybrid model. Blame that big battery pack. For a customer base that loves loading up their pets on the weekends, it’s worth mentioning that your golden retriever may resent you for choosing the PHEV, as it has less wiggle room due to the raised floor.

It’s worth mentioning that your golden retriever may resent you for choosing the PHEV.

The cabin is Subaru through and through in terms of its straightforward design and comfortable seats. However, rear-seat air vents are noticeably missing – perhaps another gripe from the golden retriever.

Beyond its advanced powertrain and interior qualities, the question still remains: Is the Crosstrek Hybrid just another PHEV city slicker, or is it a true Subaru? It took only a matter of moments to be reassured that the Hybrid has a plentiful amount of Subaru in its electrified DNA.

Once you press the X-Mode button to engage the vehicle’s off-road setting, the car attacks the dirt with little hesitation. X-Mode also fires up Hill Descent Control, which uses the car’s brake regeneration system to keep things in check moving downhill, while also adding some extra juice back into the battery (brief applause for innovation). And remember, the all-wheel-drive system is working all the time, even when using purely electric power. So, when the going gets a little hairy, the Crosstrek is always ready for the challenge.

Disregarding the soon-to-be-mandated artificial noise spouting from the car’s grille-mounted speaker, the hybrid took on rocky obstacles in near silence. And because full torque is available from the moment you press the accelerator, approaching inclines and extra rocky bits is much less of an occasion. Off-roaders will appreciate the extra low-end torque, which is delivered in a smooth, linear fashion.

Prices start at $34,995, or $7,800 more than the $27,195 gas-only Limited, though the Crosstrek Hybrid qualifies for a $4,500 federal income-tax credit, as well as state credits, depending on location. Unfortunately, Subaru only plans to stock the car at dealers in 10 California Air Resource Board (CARB)-compliant states, though customers may order the Crosstrek Hybrid and have it delivered anywhere in the remaining 40.

So, it’s a functional hybrid that also earns the Subaru stamp of approval, albeit with a few shortcomings such as occasionally anemic power output at higher speeds and a slight loss of cargo space. If buyers are willing to live with such flaws and reconcile the nearly $35,000 sticker price (the non-hybrid Limited trim starts at $27,195, or $7,800 less), the Crosstrek Hybrid could make a splash with urban-dwelling, eco-conscious, and outdoorsy.

The second-generation Crosstrek Hybrid has its issues – tight cargo space, limited power, and a hefty starting price, so don’t expect it to become the brand’s top seller or supplant its cheaper, non-hybrid sibling. However, it stands out as an over-achiever, finding the balance between electric efficiency and off-road capability. Flaws aside, it’s the most interesting car in the Subaru family right now.