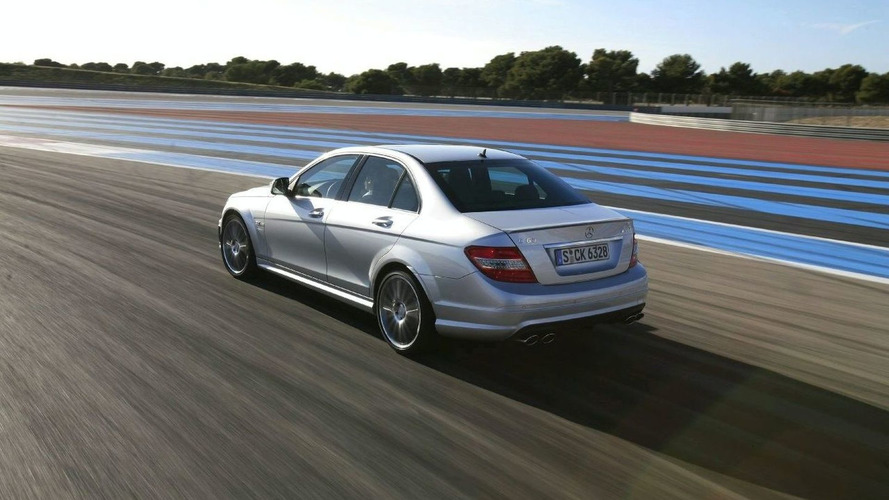 This is a real shift for Mercedes’ in-house tuning arm, which seems to have broken free from the sensible shackles imposed by the three-pointed overlord.

Some say the power war between the German giants is heading out of all proportion when it comes to their real drivers’ halo cars and there were heads left shaking by the sheer audacity of the 420bhp BMW M3. So quite what those folks will make of the 457bhp Mercedes C63 AMG is anyone’s guess, but when it arced round the second gear hairpin at Paul Ricard in a cloud of acrid tyre smoke with the back end hung out like a fat girl’s rear it all made perfect sense.

This is a real shift for Mercedes’ in-house tuning arm, which seems to have broken free from the sensible shackles imposed by the three-pointed overlord. Just as the SLR’s potential razor’s edge was blunted in the name of comfort, so every recent AMG model has lacked that same cutting edge and on track were a source of constant frustration as the electronics kicked in and strangled the fun at the first side of a slide. But that doesn’t happen anymore.

There’s a Sport mode for restrained tail slides, but now off really means off, which is a first in Mercedes’ recent history. It’s a real car that will let it all hang out and steer on the throttle, which makes it a surefire winner and a genuine rival to BMW’s M3 and Audi’s RS4.

And sitting in the pit-lane at Paul Ricard, blipping the throttle and hearing the 6.2-litre V8, spool up like a Messerschmitt soaring overhead, I didn’t need a spec sheet to know it blew both of them away in terms of pure pulling power. Its 457bhp comes ata heady 6800rpm and it will keep going all the way to 7200, no mean feat for a rumbling V8 that has built its reputation on torque. That comes in at a more than healthy 443lb/ft of torque at 5000rpm and 370lb/ft of that kicks in at 2800rpm.

So it’s a high-revving and torquey powerplant and, despite the capacity, it weighs in at 199kg, compared to the 202kg M3’s four-litre. Magnesium intake manifolds, an aluminium crank case and other high tech materials help the cause, and the engine also comes with coated cylinders and can regulate its own fuel pressure from 3.8 to 5 bar, which sounds pretty snazzy.

And thanks to the seven-speed ‘box there’s no break in the torque curve as this automatic shifts between cogs with the smoothness of Egyptian cotton in standard mode and holds on to the final few revs with Sport engaged. It might lack the ultimate urgency of BMW’s fatally flawed SMG, but we’re talking undetectable fractions and at least all three modes work as they should in the AMG.

In full manual mode it uses paddle shifts and will actually run right to the limiter, aping a full manual while keeping the convenience of the automatic in heavy traffic. VW’s DSG might be the best on the market, along with Ferrari’s much more expensive F1 Superfast, but the Mercedes is probably the best of the rest right now and even in a driver centric car like this there’s no sense of loss as there was in the BMW M5 – the three-pointed star has relied on automatics for as long as we can remember.

The C63 still feels nose heavy and the meaty square-bottom steering wheel takes muscle to throw deep into the bends, but when a car comes loaded with this much power, all of it heading through the rear wheels, that initial press-on feel can be countered with a full dose of throttle and a touch of bravery.

Opposite lock is purely optional, but once pushed into a slide it’s easily held with a deft twist on the wheel and not much else. It’s an easy car to drive beyond the limit, especially with the Performance Pack that was fitted to the track car we tried.

That includes a Limited Slip Differential with 40 per cent locking, as well as firmer suspension, thicker anti roll bars and a top-end speed of 174mph, gently breaching that gentlemen’s agreement of 155mph top end speeds between the German marques.

With the upgrades the car pitched into bends far less and the trademark understeer was more easily, although it makes the Mercedes even stiffer than the M3 and isn’t perfectly suited to the public road and for a machine like this it will only suit the committed driver.

Before the trip to the test track owned by F1 supremo Bernie Ecclestone, though, we hammered down the kind of coast road that dreams are made of. Sweeping fast corners and switchback hairpins gave us a chance to explore the limits of a car that carries the hopes of the three-pointed star in its elegant hands.

On the softer, standard suspension, the road car felt like a different animal, rolling into the bends far more. But it will give you all the fun you can handle on most roads and despite its kerb weight of 1730kg it’s more than agile enough.

AMG borrowed a front axle from the CLK63 AMG Black Series, which needs no real introduction here, so the front is 35mm wider than the standard repmobile and is apparently firmed up by no less than 100 per cent as a result. A 12mm wider rear, revised multi-link rear suspension, bigger drive shafts and joints are all evident over the standard C Class, too.

Does it have quite the razor’s edge handling of the M3? Perhaps not, but it makes up for that with traditional Mercedes safe seats of ride quality and smoothness in 95 per cent of conditions.

It looks the part as well, with the trademark, vicious AMG front grille with vents cutout to the side now joining forces with power bulges on the bonnet. A new rear apron houses four polished exhaust exits and a vacuous diffuser joins up with a lip spoiler to sharpen the rear. The side skirts simply accentuate the gorgeous side profile of the base model, with that crease marking the waistline, and prove the fact that this is the sportiest looking Mercedes for many a year in base form.

Again its more conservative than the bulbous, violent M3, but only just, bringing it down on the right side of the class vs crass divide.

It’s a bit Spartan inside, for a car that costs so much as the plastics show its lowly roots. That aside the sports seats cosset and support, everything falls easily to hand and navigating the controls feels more intuitive than its immediate rivals.

It might not quite have the handling to slay the M3 or the RS4, either, but it’s close enough and as an all-round package the Mercedes is a much better bet thanks to its pure simplicity and brute force. That backroad blast or circuit drive will only happen once in a blue moon with a car like this, instead they do their work on the road and the Mercedes, without the Performance Pack, is the pick of the bunch.

This is the best real driver’s car from Stuttgart since the 190 Cosworth, it’s that good. And anybody that has memories of understeering, over-engined, electronics-dominated barges, would do well to look again at the fading trail of tyre smoke left by the C63 AMG round the hairpin at Paul Ricard.