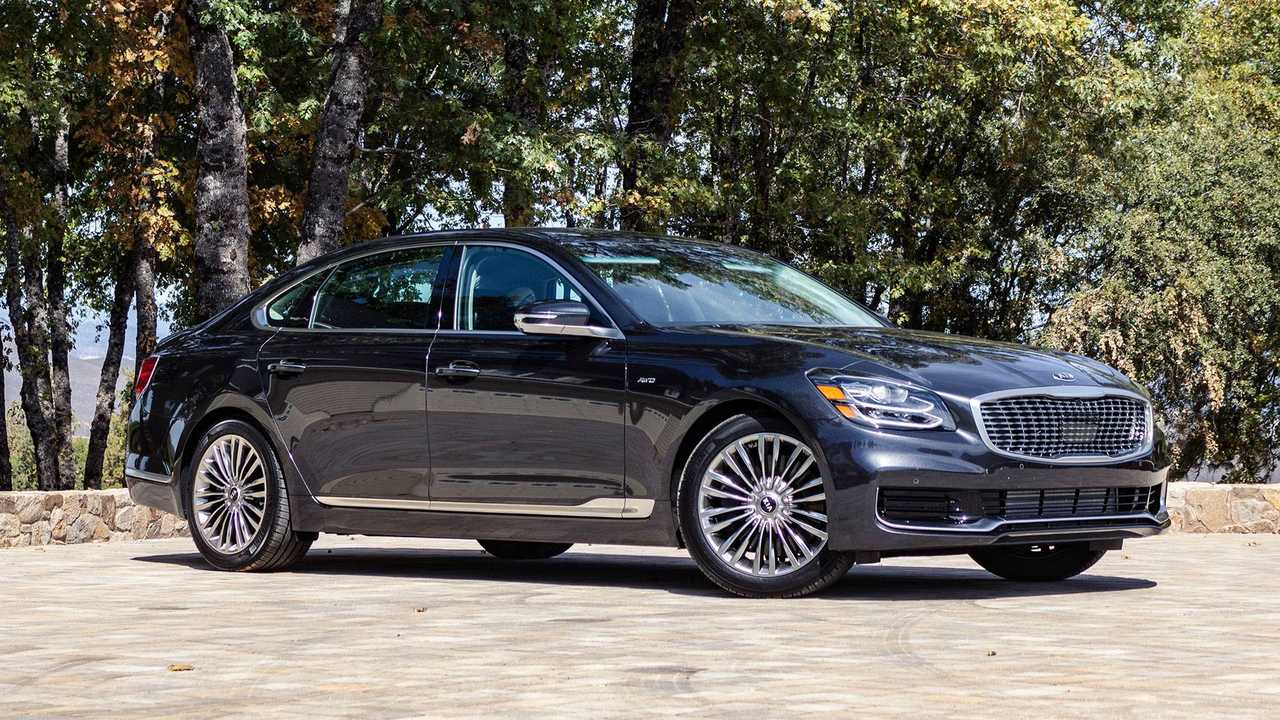 Under the radar, but over the top.

Ever since Lehman Brothers collapsed nearly a decade ago, there’s been a rising anti-capitalist, anti-rich sentiment that’s permeated through college campuses and parts of America like some kind of toxic shiver. It’s become vogue to keep your indulgences under the radar, and this concept of stealth wealth is why a brand like Kia has managed to carve out a unique niche in the luxury segment.

When Kia brought the K900 to the U.S. in 2013, it was little more than an experiment the brand was hoping could help banish the perception that its cars were still cheap, low-quality wares for the proletariat. The K900 was already succeeding in its Korean domestic market, and abroad in parts of the Middle East and Russia, where its plush ride, solid construction, and understated presence quickly made it popular with those who didn’t want the ostentatious baggage associated with big barges from the West. When it landed in America, LeBron James even drove one for a bit.

Napa Valley’s rolling vineyards, mountain vistas, and spaghetti-like roads serve as the setting for a sample of the second-generation K900. On the surface this was just another of the mild, mid-week wine tours the region is famous for, but from the cockpit the story was a little bit different.

See, the U.S.-market K900 isn’t like what’s sold in the rest of the world. In the car’s key markets, it's softer and smoother because the purchase decision is driven almost exclusively by rear seat passengers seeking the serenity of a cosseting, comfortable, chauffeur-driven ride. On this side of the pond we don’t really do chauffeurs, unless it’s a trip to the airport or granddad has old-time railway money. North American K900s are sportier, tighter, and tuned for slightly more aggressive responses, almost to the point of paradox.

North American K900s are sportier, tighter, and tuned for slightly more aggressive responses, almost to the point of paradox.

Kia calls the K900 an unexpected car for the brand, and goes as far as to claim it leans on the fringes of the luxury sport sedan segment.

The car’s surprise athleticism is baked into a platform it shares with Genesis sport sedans and Kia’s own Stinger. Like both of those cars, the K900 contains many of the secrets former BMW M boss Albert Biermann smuggled over in the back of his brain when the Hyundai empire brought him in to oversee vehicle testing and performance development.

The new K900 gains two inches of wheelbase over the old car, and compared to the Stinger, it’s more than an inch and a half wider and nearly a foot longer. The growth spurt not only offers an increase in interior volume, but also helps the car stay stable and squat at rambunctious speeds. There’s more duality at work from some of the chassis mods – the car has a dual firewall that was designed to filter out engine and road noise, but also provides additional lateral bracing across the nose, which helps keep the 4,600-pound sled from feeling sloshy when transitioning lateral loads from side to side. That is, admittedly, an absurd statement to make about an executive-class saloon. There’s an extra barrier placed behind the rear seat pan just aft of the backseat, as well, which muffles reverberations from the rear wheels.

Speaking of the backseat, it’s the place to be. The sumptuous environs of the world-spec K900 transfer to the North American model – cars equipped with the VIP Package gain reclining rear seats, a full suite of redundant controls for the infotainment system, and completely independent climate controls. The driver’s side and the passenger side rear seats get 12-way and 14-way adjusters, respectively, but the right side gets a classy button that reclines the rear seat while simultaneously moving the front passenger seat forward to facilitate maximum leisure.

Jumping into the front of house is an equal, if not better experience. Kia claims it’s figured out a way to make the Nappa leather upholstery durable while still retaining its famed suppleness. The stitch pattern didn’t do anything for my taste, but that didn’t make them uncomfortable. The driver’s side seat is 20-way adjustable, while passengers get a 16-way chair. The company was also particularly proud that they had spread the heated and cooled elements over a greater area of the seats.

For the driver, the switches are sprayed with a metal coating and they move languidly and with weight. The leather-wrapped steering wheel is lovely, the button layout on its face is appealing, and the overall design is nice enough to look at everyday. The double-decker dash gives a sense of roominess, and the real-wood trim is finished in matte tones that blend well with the satin trim and switchgear. Should you care about such things, there’s also an analog clock branded by Maurice Lacroix mounted in the middle of the center console. It’s not an IWC like you get in certain Mercedes models, but the clock is fine.

Should you care about such things, there’s also an analog clock branded by Maurice Lacroix mounted in the middle of the center console.

Comfortable as the chairs are, the star of the interior is definitely the availability of 24.6 inches of total screen space. All cars get a 12.3-inch infotainment system that does the standard stuff it should, but also happens to do it well – if in-car technology is the tiebreaker between this and the latest Lexus and its touchpad-based infotainment, you deserve all of the many frustrations coming your way if you don't choose the Kia.

Other standard kit includes wireless charging pads, Apple CarPlay and Android Auto functionality, plus a 9.7-inch head-up display. Kia also includes a suite of driver assistance systems including a 360-degree surround-view camera and a blind spot monitoring system that provides live video to the driver via the instrument cluster when the signals are activated. The K900 also debuts a Kia-first haptic steering wheel. There’s also lane-keep assist, forward collision avoidance, a driver attention warning system, rear cross traffic alert, and the debut of the brand’s first semi-autonomous features, such as lane-follow assist (it will steer for you, but only if the sensors can see the lines) and a smart cruise control system.

The K900’s entire interior package is more cohesive than anything BMW has thrown together in years, is less maddening than a Jaguar, plusher than Japanese rivals, and is just plain better than Cadillac and Lincoln.

But it’s on the road where the K900 shined and surprised. Sure, Kia kept saying the K900 was like a fancy Stinger, but we weren’t ready to believe them until we traded Napa’s high traffic Silverado Trail for the twisty bits of California’s Highway 29, as we climbed over Mount Saint Helena and headed towards Clear Lake. All four corners get a multi-link suspension and electronic dampers.They work with the K900’s additional lateral chassis bracing to deliver a front end that you can nonsensically lean on until the Michelin Primacys start crying for mercy and a rear that’s sturdy and friendly, which is nice when dealing with the light switch throttle response in sporty conditions.

The K900’s 3.3-liter twin turbo V6 makes 365 horsepower and 376 pound-feet of torque, which it runs through an eight-speed transmission identical to the Stinger’s. Thanks to the K900’s longer wheelbase, the engine now sits entirely behind the front axle, helping the K900 achieve a fifty-fifty weight distribution. Unlike the Stinger, or its cousins from Genesis, the K900 will only be available in all-wheel drive. In normal conditions, the rear-biased system can send up to 50 percent of power to the front axle if needed. The Sport mode will send at least 20 percent of the power to the front wheels and increase from there as needed, but things can also be vectored side to side in order to help rotate and drag the car through corners.

Unlike the Stinger, or its cousins from Genesis, the K900 will only be available in all-wheel drive.

Once you come to grips with the idea of corner carving with 4,600 pounds of Kia beneath you, the K900’s ability to shift power around is addicting and entertaining. More addicting is the twin-turbocharged engine’s ability to fling the big Kia out of corners, although exploit this willingness too often and the main problems with the K900’s dynamics rears its ugly head.

The brakes aren’t meant for actually going fast, and transmission logic fights for control of the gear changes, even though the transmission executes shifts with the paddles faster than if left to happen organically. But since most consumers won’t be slicing and dicing with their K900, these aren’t as big of issues as they sound.

At the end of the day it’s not hard to like the K900. Size wise, the big Kia splits the difference between a Genesis G80 and G90 (its fraternal twin), while on the design front, its softly sculpted styling, proportioned quadratic grille, and classic three-box dimensions make its corporate cousins look like bloated wasps. Performance wise, the big sedan is willing when you ask it to be, and is just as happy to move about in silence on the open road, rewarding its pilot with comfort and fuel mileage in the mid-20-mpg range.

On the pricing front, Kia says a a fully loaded K900 will probably go for around $63,900, or $60,000 if you avoid the ritzy backseat and digital instrument cluster. But go whole hog and get it all, because you owe it to yourself, even if you don’t want the rest of the world to know about your indulgence.