Park City, Utah is the sort of place where wealth is concealed rather than flaunted. Vehicularly speaking, that is. Whereas consumers in Miami or Los Angeles seem to seek the apparent prestige of a premium automotive marque, the people of Park City tend to appreciate the modesty of mainstream automotive brands. 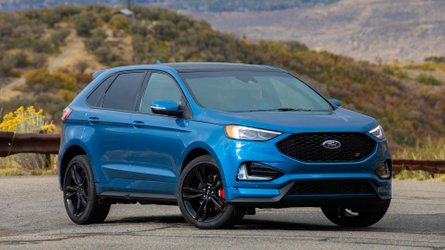 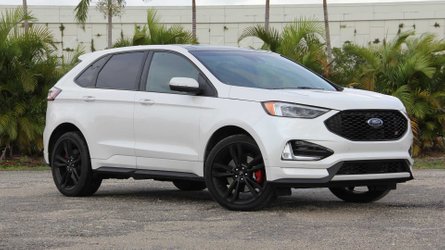 Humility, however, is not synonymous with austerity, and the 2019 Ford Edge seeks to entice crossover SUV buyers who are both attracted to the demureness of the Blue Oval badge and the lavishes of luxury. This is particularly true of the near-top-of-the-line Titanium trim.

Like all 2019 Edges, the Titanium benefits from revised styling that trades last year’s cartoon-ish looks for more handsome, if somewhat generic, styling. Trim LED headlights come standard on every 2019 Edge model, and the free-standing bezels work with the revised lower fascia to give the Edge an added dose of sophistication. That said, the Edge could easily pass for a GMC or Hyundai product if not for the prominent, grill-mounted Blue Oval.

The rear end, though, suffers from no such identity crisis, as the revised rear fascia and LED tail lights provide a distinct look that emphasizes the crossover’s prominent width and shapely shoulders.

Compared to lower level SE and SEL models, which rest on 18-inch wheels and tires, the Edge Titanium rolls on standard 19s. The Edge Titaniums that Ford brought to Utah, however, came equipped with the $1,195 Titanium Elite package, which includes larger 20-inch wheels and tires, and body-color and chrome trim surrounds at the sides, front, and rear of the crossover.

Despite the diameter of its rolling stock, the Edge Titanium rode with poise and composure over both smooth and tarnished tarmac, and the crossover’s stiff chassis and soft damping never seemed perturbed by mid-corner bumps or pockmarked pavement. However, numb and light steering, and a chassis with a propensity toward understeer, means the Edge is a rather feeble corner carver (like most of the other vehicles in this class).

The Edge makes a better case for itself as a long-distance hauler, as thick glass, and copious sound-deadening material keep road- and wind-noise at bay. In fact, the only unpleasant noise that enters the cabin is that of the turbocharged 2.0-liter four-cylinder engine – the sole engine offered in Edge SE, SEL, and Titaniums trims.

The only unpleasant noise that enters the cabin is that of the turbocharged 2.0-liter four-cylinder engine.

The forced-induction four is a gritty sounding thing above 3,000 revs or so. Still, its formidable 250 horsepower and 280 lb-ft of torque – five more horsepower and lb-ft compared to last year – make it a likeable enough engine in day-to-day driving.

Paired with a new eight-speed automatic transmission, the powertrain moves the approximately two-ton crossover with reasonable brisk. Turbo lag is minimal, and the gearbox serves up silk-smooth gear changes, although it is rather reluctant to downshift at highway speeds. Tapping the “Sport” button results in quicker reaction times, however, it also all-but eliminates the transmission’s desire to tap into its overdrive gears.

The $1,995 all-wheel-drive system is a new setup that can disengage the rear driveshaft, if conditions permit, to reduce parasitic losses. It’s a quick and seamless transition, and if not for the power-flow graphic in the digital instrument cluster, I would have never known that the rear differential was occasionally cut out from the powertrain equation.

Other tricks tucked up the Edge’s proverbial sleeves include newly standard tech and safety features such as a 4G LTE wireless hotspot, automatic high-beam headlights, automatic front braking, lane-keep assist, and a blind-spot information system. Every Edge Titanium present at my drive in Utah also came equipped with adaptive cruise control and a lane-centering system. Both items are part of the $4,150 Equipment Group 301A package, which also includes an in-dash navigation system, heated and ventilated front seats, and the aforementioned panorama sunroof. These items complement standard Titanium features such as a wireless charging pad, leather seating surfaces, and a hands-free power rear liftgate. The Edge I drove also came equipped with $395 worth of Ruby Red paint and the $495 Cold Weather package (heated steering wheel, windshield wiper de-icer, and more), which brought its out-the-door price up to $47,775.

Regardless of trim, though, all 2019 Edges add a rotary-style shift knob to its mostly carryover cabin. That’s no bad thing, though, as the interior of the Edge features quality materials, plentiful storage space (the center console is deeper than some swimming pools), and comfortable accommodations for both front and rear passengers. Nevertheless, thick pillars and a cab-forward design continue to make the Edge feel much bigger – and harder to navigate in traffic – than its size suggests.

While the inherent bulk and middling dynamics of the 2019 Edge won’t win over enthusiasts, the mid-size crossover SUV’s quiet and coddling cabin, wealth of standard and available active safety items, and comfort-oriented nature are sure to appeal to consumers in search of the cushy qualities of a luxury vehicle wrapped in an unassuming, mainstream package. Park City residents are sure to love it.