Extraordinary efficiency is the name of the game with this plug-in crossover SUV.

Upon initial inspection, the Kia Niro PHEV (short for plug-in hybrid electric vehicle) appears to be an unassuming member of the rapidly growing compact crossover SUV segment. But little details such as the extra fuel door on the front fender and the “electric” blue exterior trim pieces give away what this car is hiding: A fuel-efficient gasoline-electric powertrain that can be plugged in and charged to allow up to 26 miles of all-electric driving. 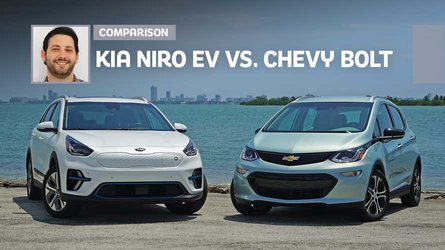 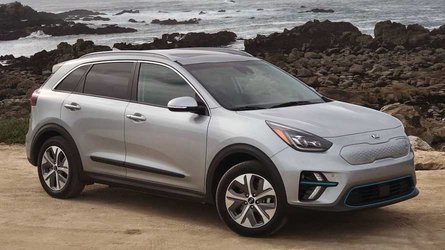 Buying the PHEV version of the Niro is a $4,000 commitment over the regular hybrid model which starts at $23,340. PHEV prices start at $28,840 (including a $940 destination charge) for the base LX, though our top-trim EX Premium tester came in at $35,575, including destination and some carpeted floor mats.

The added features found in the EX Premium bring the Niro PHEV to a higher price bracket. But compared to rival vehicles like the Toyota Prius Prime and Chevrolet Volt, the Niro PHEV’s pricing fits in just fine. Kia was also sure to pack in a decent amount of equipment with each trim-level upgrade, making the EX Premium’s higher price tag a worthy consideration.

If you’re looking for an extra pinch of spice in the Niro PHEV recipe, then don’t look at this plug-in’s mug. Some electrified vehicles have the ability to turn heads on the road (take the BMW i3, for example), but the Niro is not one of them. The design follows the compact crossover playbook rather closely, with minimal coloring outside the lines. The Niro is small, too, without much of a height advantage over a standard sedan.

The Stinger is certainly the looker in the Kia family, and you can see Kia tries its hardest to bring some of the four-door coupe’s style to the front-end of the Niro. Where Kia perhaps falls short is in the small details. No major character lines grace the Niro’s body panels, and the rear hatch is as flat as a stack of pancakes. The Niro PHEV may be functional, but it’s certainly not memorable.

The Niro’s grab-and-go interior is a nice contrast to the usual alien touches that come with so many electric vehicles (like the odd shift selectors in the Prius and the Leaf). In the Niro, you shift straight down to “D” and drive – no space-age design to overcome, here. The gauge cluster and center stack buttons are equally pedestrian and easy to use, and little touches like the “driver only” air conditioning option are pleasant reminders this is an eco-friendly crossover.

Our test car came equipped with EX Premium goodies such as heated and cooled leather seats, which held their own in the hot Florida sun. The seats were supportive and offered adjustability in all the right places. While I couldn’t find a volunteer willing to test the heated steering wheel, I’m certain it does its job just fine.

Front occupants have plenty of room in all directions, but those seated in the back have less liberty to move about. Both legroom and headroom are tight, but this is no surprise considering the overall size of the Niro. Leave the seats upright, and the Niro offers 19.4 cubic feet of cargo space to work with – 54.5 cubic feet if the rear seats are folded down. Plenty of room for a small family on the move.

If there is a knock against the interior, it’s undoubtedly the massive pieces of plastic overtaking the dash and side panels. Plastic is no stranger to this segment, but at $35,000, some alternative choices could liven things up a bit.

Spend a few moments with the Niro PHEV’s 8.0-inch UVO touchscreen infotainment system and you will see just how much of a strongpoint it is. Though the menu layouts are odd, UVO’s functionality won’t make you want to pull your hair out. If you’re not a fan of the Kia’s navigation system, then CarPlay and Android Auto are there to help as standard equipment.

Scrolling between UVO’s menus is a breeze with very little lag or hesitation. Baked into the car’s settings is a fun tree-shaped display that shows just how efficiently you’re driving. In most cases, this was a happy progress report for us behind the wheel. Though too many highway on -ramps or acceleration bursts quickly kills the tree graphic and revokes your eco-driving accolades.
The optional Harman Kardon audio system leads you to believe you’re sitting in something more expensive than a $35,000 Kia. UVO’s interface and sound system join in sweet harmony to make the Niro’s interior a very nice place to hypermile on the highway.

With this vehicle segment, any extra power or torque is more than appreciated without compromising efficiency. And, luckily, the Niro PHEV has electricity on its side to accommodate both. The powertrain is made up of two main components: a 104-horsepower 1.6-liter Atkinson-cycle four-cylinder engine and a 60-horsepower AC electric motor. Combined output is 139 hp, though the 195 lb-ft of torque is what you appreciate most.

Getting off the line is no chore, thanks mostly to the plug-in’s bigger electric motor. While the Niro PHEV is by no means quick, you never feel like you’re being penalized for buying an economical car while driving it. Thankfully, the ride is not compromised by the car’s extra battery weight. The suspension is just soft enough to soak up blemishes on the road – of which Florida has many – without compromising too much on handling ability.

In mixed highway/city driving, the electric motor takes over when, and for as long as, it can. But press moderately on the throttle and you’ll feel the gas engine come in to save the day. The transition between gas and electric driving modes occurs rather seamlessly and almost undetectably. Sport mode kicks in when the gear selector is bumped over to manual mode. This is where the Niro does its best impression of a sportier car, complete with a glowing orange tachometer in front of the diver. Sport mode is always there if needed, but, with the Niro PHEV, your thrills will be found at the pump, not behind the wheel.

Kia earns praise with advanced safety tech, both as standard and optional equipment. Every trim level comes equipped with autonomous emergency braking and adaptive cruise control. Both are still features you may pay extra for, even in more expensive vehicles.

Our EX Premium car came equipped with every available safety feature, and the standout hero was without question the rear cross-traffic alert system. It makes backing out of any parking space that much easier thanks to its subtle-but-purposeful beep that announces the detection of a a passing car. You will be thanking yourself in the mall parking lot on Black Friday for ticking that option box.

Fuel economy and electric range is where the Niro PHEV has to make its strongest argument against the cheaper, and still efficient, Niro Hybrid. Again, is it worth the $4,000 premium over the regular hybrid model to gain plug-in capability?

For those with a quick commute to the office, the plug-in feature may indeed justify the extra dough. A full charge is achieved in two to three hours, and the Niro can travel on electric power alone for an EPA-rated 26 miles. This number bests the Prius Prime’s 25-mile EV range, but falls far short of the Chevy Volt’s 53 miles. Once the juice runs out, the EPA reports that owners can expect a combined 46 miles per gallon – exactly what the Niro’s on-board computer said we averaged during our week with the car. Compared to the Chevy Volt’s combined 42 combined MPG and the Prius Prime’s 54, the Niro PHEV sits right in the middle.