With a sleek design and smart technology, the newest wagon on the market offers less stigma while hauling more stuff.

Buick has quietly been enjoying winning season after winning season with strong sales over the last five years, and it currently ranks as General Motors’ second-best-selling brand globally. Customers aren’t complaining either, as the premium brand has garnered J.D. Power awards in customer service and sales experience. This is in large part thanks to the seemingly never-fading popularity of crossovers and SUVs, of which the brand sells no fewer than three.

However, Buick hasn’t given up on cars yet, as evidenced by the introduction of its all-new 2018 Regal. But the company is, however, distancing itself from staid sedans by launching the model initially in Sportback and wagon forms. More precisely, station wagon form.

And Buick will say so using its outside voice. 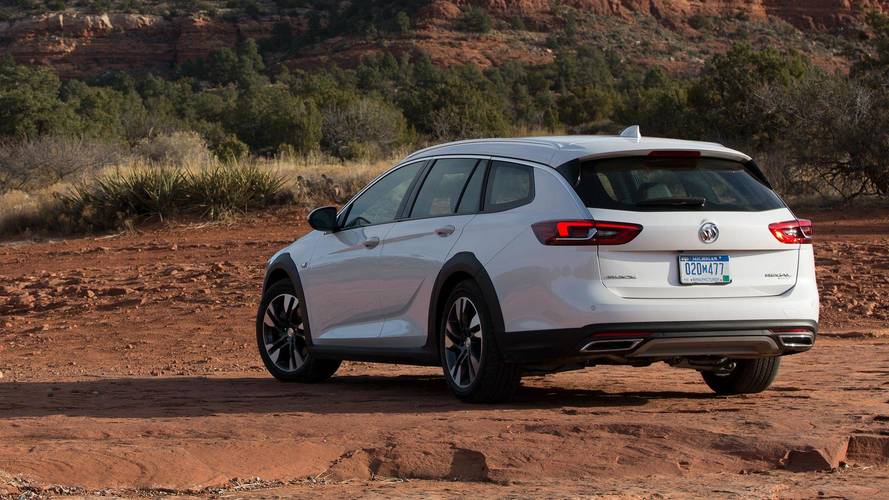 Following the Regal Sportback and its performance GS version is the Regal TourX, which is pronounced “Tour X” and not “Tourx” because, I don’t know, Tourx sounds gritty and rugged. Which, regardless of how much gaudy black cladding the vehicle wears, the TourX is not.

What the TourX is – as the corporate talking heads will say – is a crossover before the crossover. Yes, that’s as cringe-worthy a statement as “station wagon” is spat with disdain but, honestly, count me as someone who couldn’t care less about the stigma of the wagon, the minivan, the any-vehicle-that-isn’t-a-crossover. All I ask is that you do you, but you do it well.

And the 2018 Buick Regal TourX does do the wagon thing quite well.

We test drove early production models in Sedona, Arizona, and the TourX checked all the boxes a typical compact crossover would but with a couple of key advantages. For starters, it has way more room than you think. 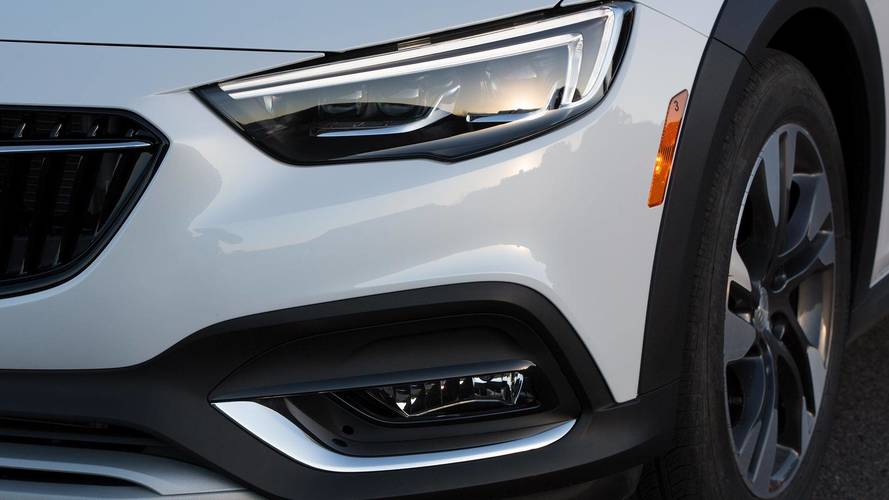 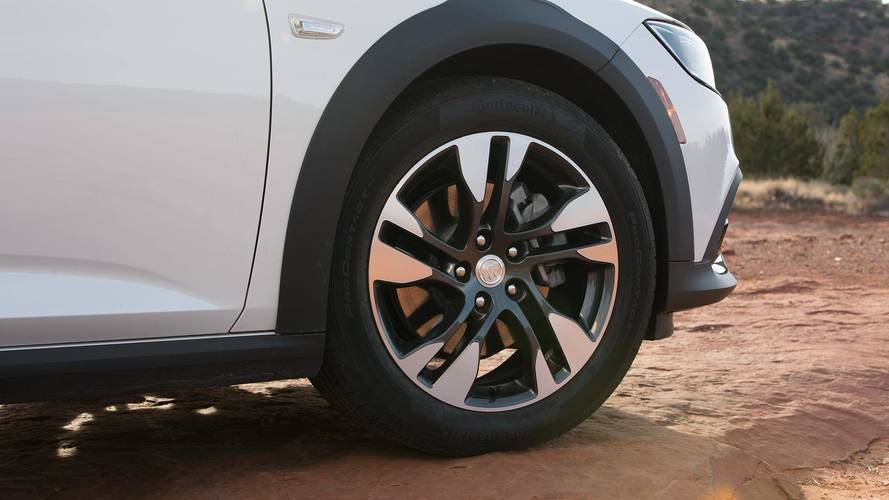 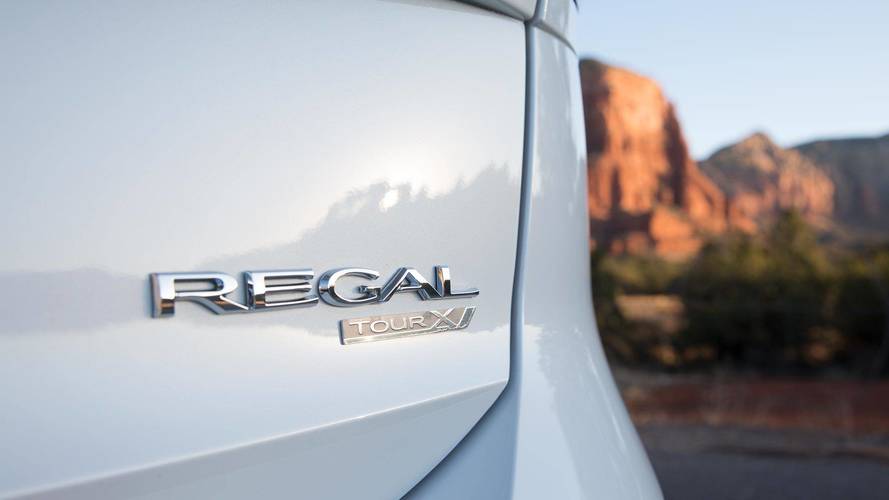 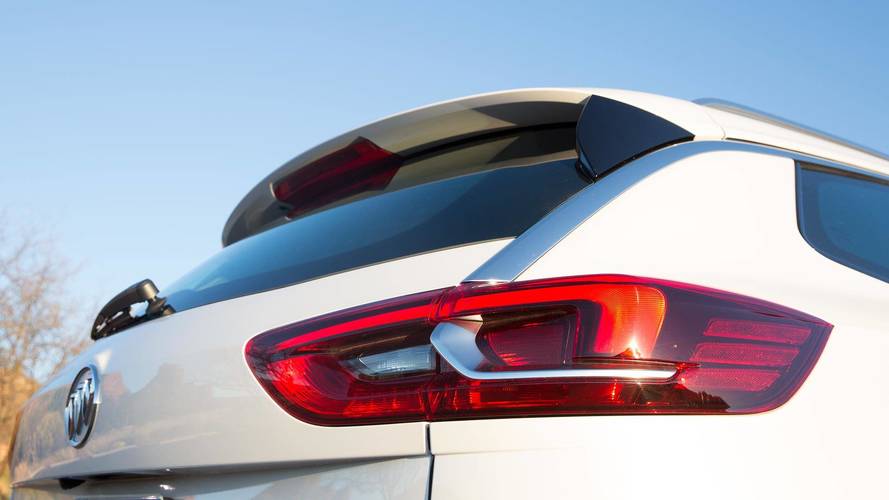 With a width of 73.3 inches, the Regal TourX is wider than the sport/station wagons Buick deems close competitors and is on par in girth versus the most popular of compact crossovers. The Audi A4 Allroad and Volvo V60 Cross Country measure in at 72.5 and 71.8 inches wide, respectively, while the top-selling Toyota RAV4 comes in at 72.6 inches.

Granted, the TourX does sport longer sheet metal with its 196.3-inch overall length, which extends beyond the 189.6 inches of the Subaru Outback and 184.5 inches of the Nissan Rogue. But cargo volume should still pale in comparison to the purpose-built, higher-riding crossovers, right?

Behind the second row, the TourX measures in at 32.7 cubic feet of trunk space. The A4 Allroad offers 24.2 cubic feet, the BMW 3 Series Sports Wagon has 27.5 cubic feet, and the V60 Cross Country lists 29.5 cubic feet. 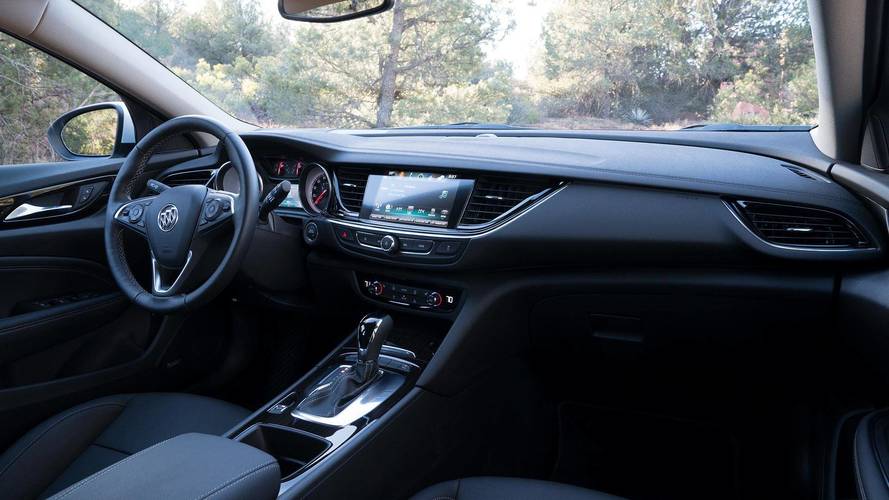 The crossovers do come out ahead with 39.3 cubic feet of cargo for the Rogue and a similar 39.2 cubic feet in the Honda CR-V, but once the rear seats are down, the TourX showcases its cargo competitiveness. With a cavernous 73.5 cubic feet, the Buick loses only to the CR-V’s 75.8 cubic feet, while the Rogue and RAV4 offer 70.0 and 73.4 cubic feet, respectively. Impressive.

Another advantage of the TourX is its height. At 58.4 inches tall, the Buick is identical to the Volvo and about half an inch shorter than the Audi. The height of the Subie and Honda are a matching 66.1 inches, which is still shorter compared to the 68.0-inches-tall Nissan. Why does this matter? Because if you’re going to load that much stuff inside of your vehicle, you probably will be hauling stuff outside of it, too. More specifically on top of it. 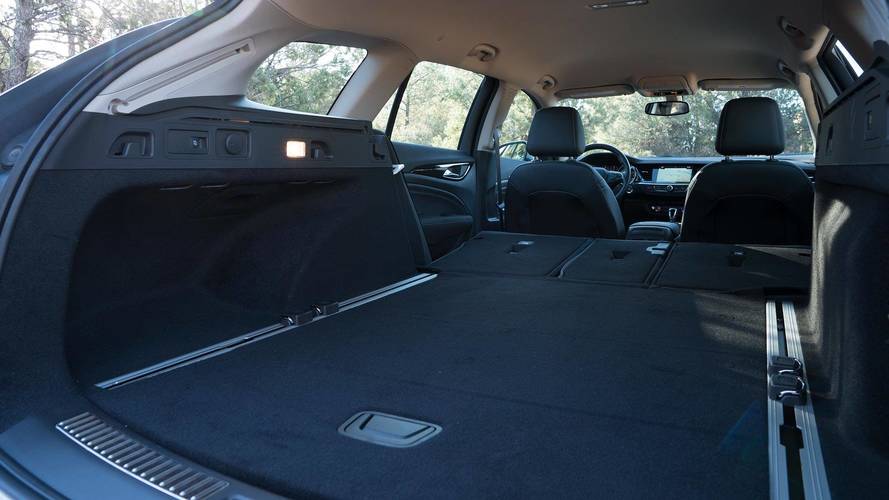 For all its length, the TourX drives like a car. For all its spaciousness, it feels small.

As nice as ride height is for many people, there are many others – like me – who prefer a reachable load height. When you’re all of five-foot-two with shoes on, trying to lift a six-foot-tall Christmas tree off an SUV or crossover, for example, is neither easy nor elegant. Definitely funny as hell, though.

What isn’t a laughing matter is how the Regal TourX handles. It is closer to the ground than the aforementioned crossovers, and its 5.7 inches of ground clearance, although half an inch higher than the Regal Sportback, is still less than the A4 allroad (6.5), and V60 Cross Country (7.9), and Outback (8.7).

Still, for all its length, the TourX drives like a car. For all its spaciousness, it feels small. And with Buick’s advanced all-wheel-drive system as standard, the midsize wagon remains composed when asphalt turns into loose gravel and rocks. Utilizing a slick twin-clutch rear differential, the AWD system can send torque to either rear wheel, needing only to capitalize on the traction of one wheel even as the other three are spinning.

Although the TourX is not meant to traverse completely off the beaten path, its AWD could prevent you from getting into a jam in the first place. And for those with “what if” ideas of drifting, yes, the traction control can be turned off.

The Regal TourX features the same 2.0-liter turbocharged four-cylinder engine found in the Sportback, which offers an output of 250 horsepower and 295 pound-feet of torque. These numbers best its European counterparts save for the A4 Allroad’s 252 hp, but do significantly outshine the Outback’s anemic 175-hp, 2.5-liter flat-four (though a 256-hp 3.6-liter flat-six is optional). The TourX isn’t sporty, nor is it advertised to be, but it is sufficient.

Power is plenty for the needs of the average consumer, even considering the elevation of the Sedona area reaches beyond 5,000 feet. Merging proved to be of little consequence, especially as the large windows offered a refreshing amount of visibility. Passing power didn’t run out either when at highway speeds or while climbing. The 8-speed automatic transmission was smooth enough that I didn’t even notice it much. 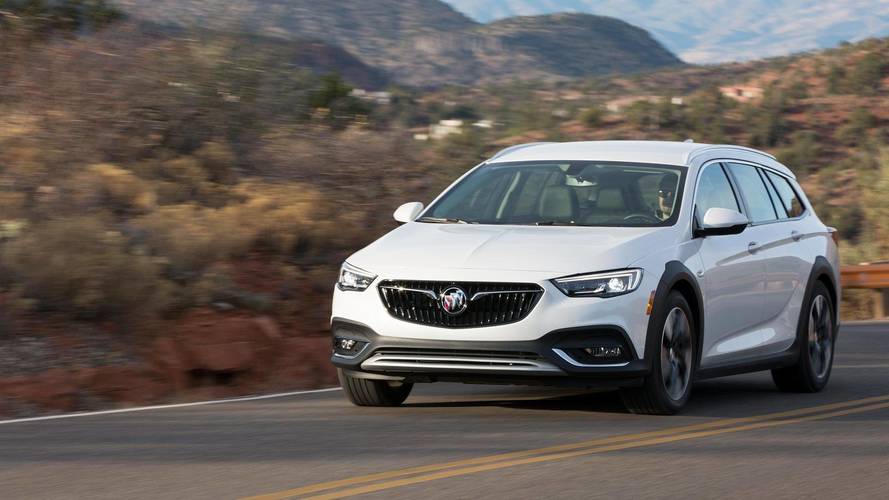 There is slight understeer but the overall steering felt good and responsive. Body roll was minimal, unlike crossovers.

The TourX offers a generally pleasant ride. Our test vehicles featured standard active noise cancellation but were not equipped with the quiet-tuned tires, which will be outfitted onto models arriving in dealerships now. But even so, the cabin was relatively quiet, especially considering the high amount of glass panels of varying size, including the panoramic moonroof.

Design-wise, the Buick might slightly resemble, say, the Volvo, but I found its style to be sleeker, with nifty nuances like a chrome strip that extends from the A-pillar to the taillights. A character line that runs along the lower portion of the doors further highlights the TourX’s elongated but slender look. Did I mention that plastic cladding, though? Ugh.

Thankfully hidden in darker colors, brighter and lighter hues do the vehicle a disservice by accentuating the bulky off-road look of the black plastic, even though the TourX doesn’t have such capability. Also, what is up with that little notch at the top of the arch? 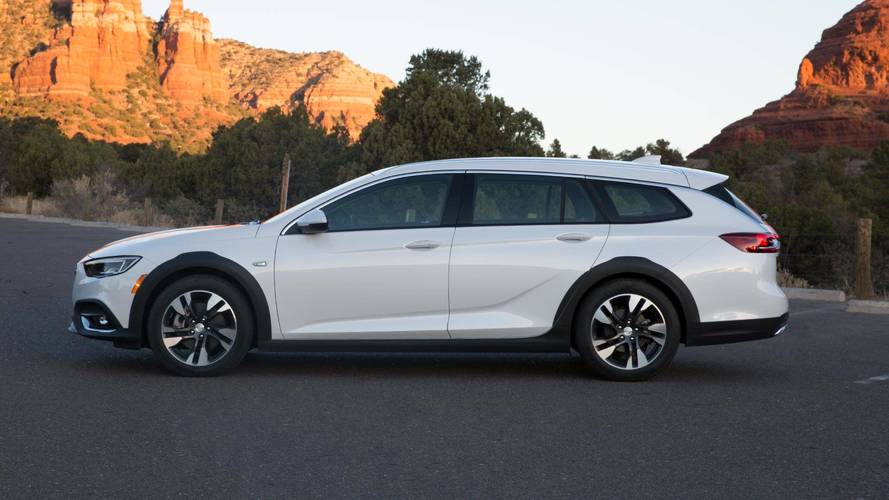 Overall, the Regal TourX is a fine vehicle and should handle most of what buyers might ask of it. Where the vehicle might get dinged is on its price, which can get up there, and some ticky-tacky complaints. Available in three trims, the base TourX starts at $29,995, which puts it well below the $40K-plus Europeans and about $3K more than the Subaru.

The brand leans toward premium makes, and because of that I expect more.

The top-tier Essence starts at $35,995, a $2,400 bump over Preferred. Here you finally get premium features such as leather seats, a heated steering wheel and front seats, a hands-free power liftgate, dual-zone climate control, ambient interior lighting, and the Preferred’s Sights and Sounds package but with the Bose stereo and navigation being replaced with Android Auto/Apple CarPlay. But the former can be added back for $1,095. You also get two Driver Confidence packages that add on conveniences like memory settings and auto-dimming outside mirrors or driver-assistance technologies like adaptive cruise control, forward collision warning, lane departure warning and its ilk.

Our tester, a Regal TourX Essence, was optioned with both Driver Confidence packages, Sights and Sounds, a panoramic moonroof, and premium paint. The final tally was $41,550. And this is where the vehicle’s shortcomings present themselves. 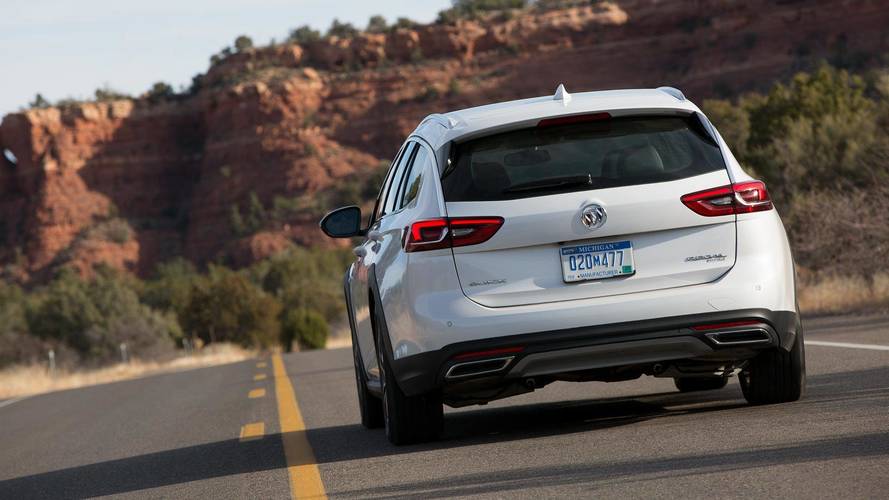 Buick considers itself neither a mass-market nameplate nor a high-end player. The automaker has positioned itself as a tweener, so to speak. Which is why I had no qualms comparing its numbers to an Audi and a Toyota. But the brand leans toward premium makes, and because of that I expect more.

For example, the cabin is comfortable and attractive, but when value-minded Kia and Hyundai along with smaller-volume Mazda are offering similar or even higher-quality upholstery and materials, I would think that something as simple as a sun visor would not feel so cheap and hollow, and have an extender, too.

Also, in order to get Bluetooth, one has to put down $35,465 for a TourX Preferred with the Sights and Sounds package. I feel it’s a bit backward when push-button start and keyless entry are standard but a hands-free phone connection is not. And, if touting yourself as a premium brand, what about ventilated seats?

Nevertheless, while the options packaging could use some work, with Buick targeting the middle ground between car and crossover, the Regal TourX makes a pretty solid case that station wagons aren’t the death of style or sensibility.