It’s barely a shadow of its namesake, but people will probably still buy Mitsubishi’s new CUV.

First things first: I have no idea why Mitsubishi resurrected the fabled Eclipse name, and on a crossover no less. The company keeps using that word, but I do not think it means what they think it means.

Yes, I sat through the automaker’s product presentation, which explained the theory, rhyme, and supposed reason (i.e., legacy) behind the naming. But I still don’t get it. And neither will anyone born after 1990, which coincidentally, was the first model year of its namesake.

If they do, they’re a gearhead who understands either through personal experience or grease monkey knowledge about the O.G. Mitsubishi Eclipse – a turbocharged sports coupe so fun to drive and so easy to aftermarket-tune that finding a bone-stock version only meant the owner hadn’t made enough pizza deliveries to afford the parts yet.

Alas, news of this new Eclipse (and I use “Eclipse” lightly) will evoke zero emotion with its target demographic, which, to the surprise of no one, is millennials. No, the only memory the word eclipse conjures will be to that one time in August when everyone thought it was okay to stare at the sun. Sigh. 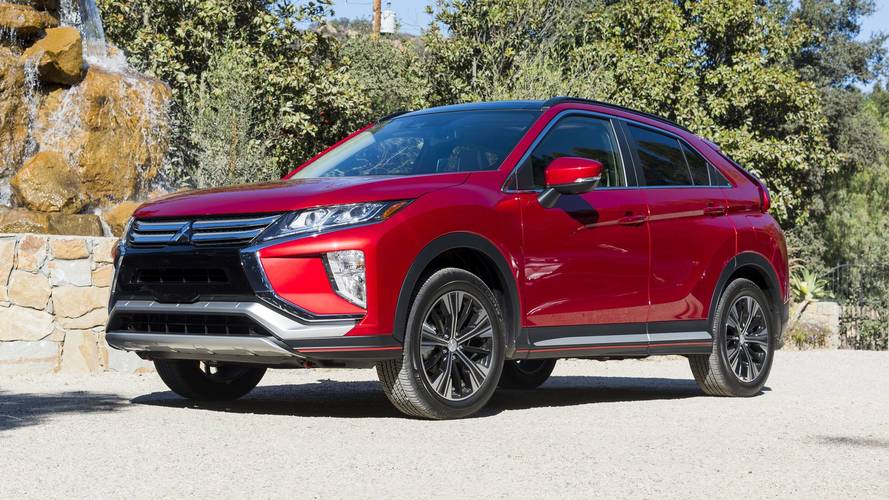 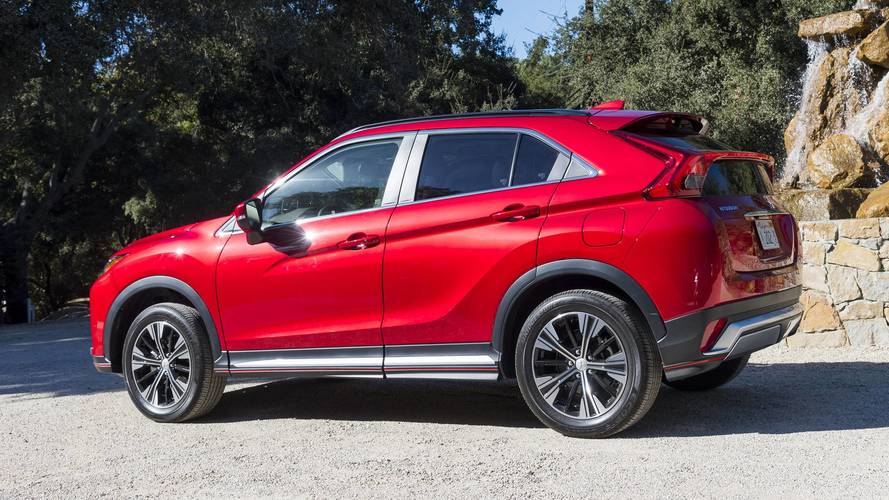 The Eclipse Cross doesn’t win in any category except one: It looks different.

Anyway, back to the Eclipse Cross. Confident of its odds within the insanely competitive compact crossover class, Mitsubishi is going all in with a huge North American marketing push via morning shows, advertising, social media, influencers – and I applaud that. In a lineup that is mostly filled with ho-hum crossovers, Mitsubishi’s lineup could use this heavy dose of ambitious energy.

Too bad the Eclipse Cross doesn’t win in any category except one: It looks different. That’s not to say it’s distinctive, because who really would recognize it as a Mitsubishi? Nevertheless, it’s a looker in the same vein as the Toyota C-HR: You either love it or hate it.

Unlike the C-HR, however, which is too much from every angle, the Eclipse Cross isn’t half bad in terms of design. Especially when dressed in the new Red Diamond Metallic premium paint, its athletic profile is rather handsome. Mitsubishi’s “Dynamic Shield” front-end design also looks aggressive and fits well with the shape and size of the Eclipse Cross whereas it appears soft or slightly ill-fitting on the Outlander models.

But I did say half bad, and the bad half is the back. The Eclipse Cross carries an unattractive and unnecessary jutted shape in the rear glass, similar to the Toyota Prius hatch. Additionally, that fancy taillight design creates a big blind spot in your rear-view mirror. You basically have a thick-ish panel bar in the middle of your sightline. If the car looked sexy, I might forgive this function faux pas, but it’s neither attractive nor useful. 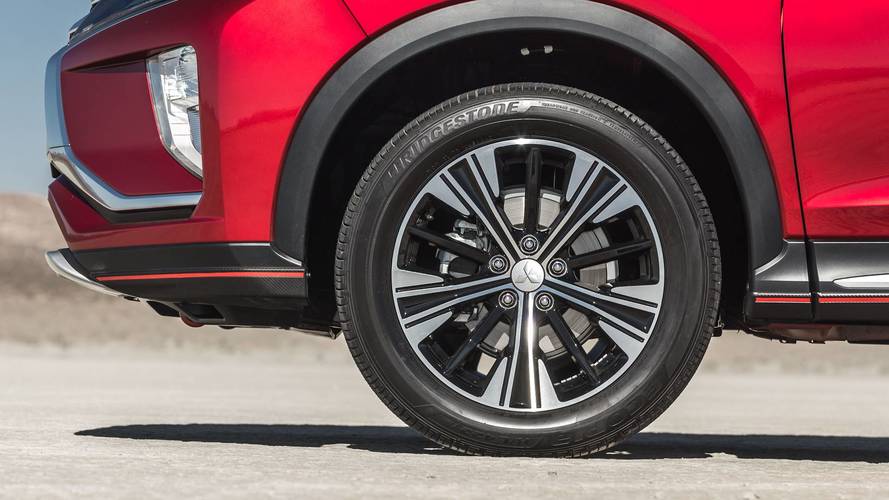 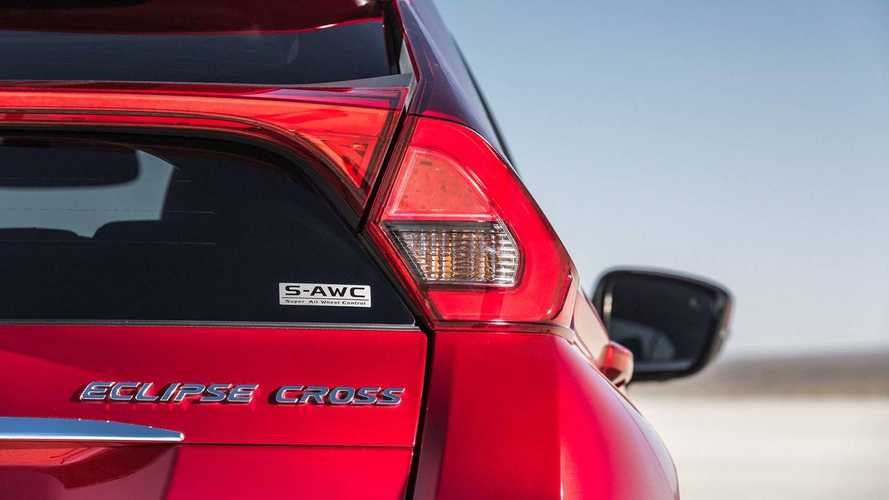 That fancy taillight design creates a big blind spot in your rear-view mirror.

On the inside, the Eclipse Cross presents itself well and gives its new technology center stage, with a touchpad to control the infotainment screen. The mostly black interior is broken up with a substantial amount of silver-finish and glossy-black pieces. My tester, a top-of-line SEL Touring, was outfitted with leather seats that featured appealing orange contrast stitching.

As comfortable as the seats were, with good cushioning and decent bolsters, the overall feel of the cabin seemed just a tad too cozy. Based solely on numbers, the Eclipse Cross, at 175.5 inches in length and 71.9 inches in width, ranks as one the shortest and skinniest in the segment. But its diminutive footprint shouldn’t excuse it from lacking functionality.

For example, the even smaller Jeep Compass (173.0 inches in length, 73.8 inches in width), offers more headroom, legroom, and cargo capacity. In fact, the Eclipse Cross ranks a distant last amongst competitors in overall passenger comfort. On the upside, the rear seats do recline and slide as standard, with nine reclining positions and almost eight inches of to-and-fro sliding for your rear-seat passengers.

The Eclipse Cross is loaded with technologies, although many of them are relegated to the top trim levels, which run ES, LE, SE, and SEL. Features like Apple CarPlay or Android Auto and a seven-inch touchscreen with touchpad controller aren’t standard until the LE model; a full-color head-up display (which is ingeniously collapsible) is only on the SEL. 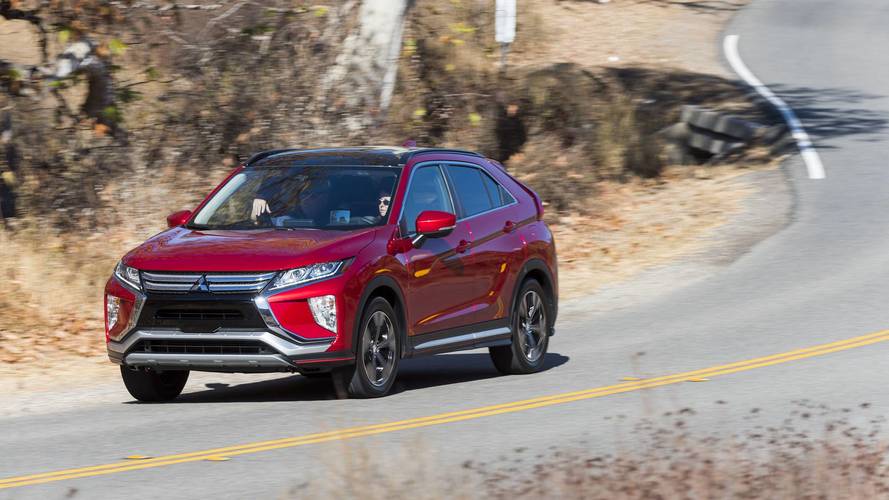 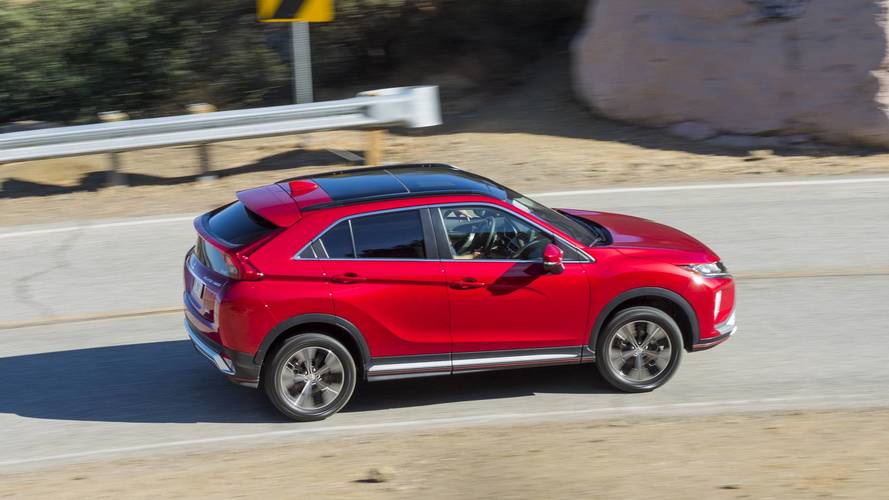 For all the corporate talk about bringing the name back to symbolize sportiness and fun, the Eclipse Cross fails.

Even the all-new Mitsubishi Connect will only be available on higher trim levels. Launching on the Eclipse Cross, the subscription-based remote service allows you to do everything from contacting roadside assistance to tracking other drivers to asking Google Home or Amazon Echo to set the vehicle temperature. SE and SEL buyers receive a free two-year trial subscription.

But you want to know how the Eclipse Cross drives, right? Not if you’re like me and you were hoping for something vaguely Eclipse-y, because you’ll be sad. For all the corporate talk about bringing the name back to symbolize sportiness and fun, the Eclipse Cross fails.

On its own, without being branded “Junior,” I may have had fewer expectations. But what Mitsubishi has done here is akin to Mazda introducing an RX-9 sports car and not equipping it with a rotary engine, Skyactiv or otherwise. Don’t call something what it isn’t and can’t be.

For starters, the turbocharged 1.5-liter inline-four in the Eclipse Cross is not very exciting. The output is 152 horsepower and 184 pound-feet of torque, which is surprisingly low when other crossovers with similarly sized engines crank out more. The Honda CR-V’s 1.5L turbo offers 190 hp and 179 lb-ft of torque and the Chevrolet Equinox’s offers 170 hp and 203 lb-ft of torque. 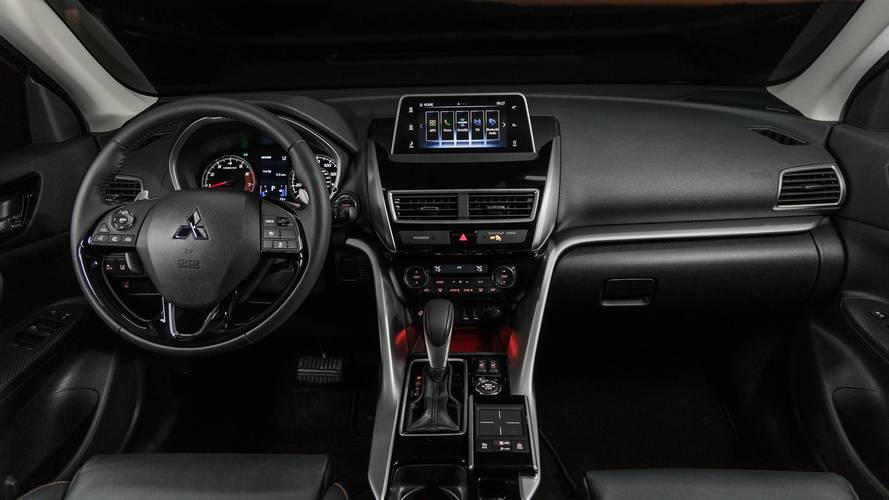 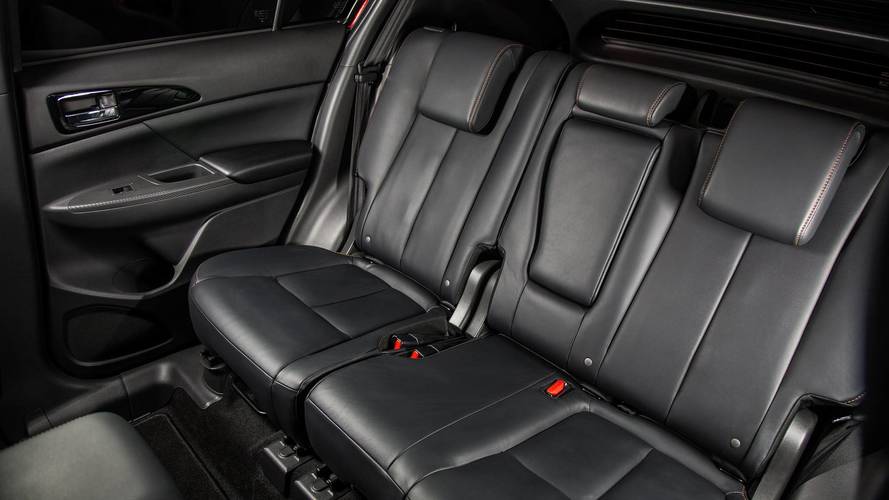 The suspension felt planted, but there was still too much bodyroll, and there wasn’t much in terms of steering feel.

Mated to a continuously variable transmission and with torque peaking at 2,000 rpm, the Eclipse Cross proved to be a functional city car. But that doesn’t mean it’s very quick. When trying to pass a large truck on the 101 freeway at 60 miles per hour, mashing on the gas pedal felt like it did nothing at all. There was acceleration, but so little that it didn’t instill any sort of confidence, creating a slight panic as we were now in the fast lane but moving at the speed of sloth. You can imagine the performance on a hill climb. Hmm.

Standard on all but the base ES trim (where it’s a $600 option) is Super All-Wheel Control (aka all-wheel drive), which features three driver-selectable settings. The system could come in handy if you frequently find yourself traversing rocky terrain or unpaved roads that aren’t mountains. On the more curvaceous paved portions of our drive, we could sense the torque vectoring kick in, which was a nice surprise. We also tested S-AWC in Gravel mode in a small undeveloped patch near Mulholland Drive. While a Land Rover would giggle at our little “off-road” course, the small hills were more than most CUV drivers ever encounter, though it did prove the Eclipse Cross can climb itself out of a literal rut. Which, in a way, is where it starts.

The Eclipse cross handled the curvy portions of our Santa Monica mountains drive just fine. The suspension felt planted, but there was still too much bodyroll, and there wasn’t much in terms of steering feel. The brakes were solid on some of our harder dives.

Mitsubishi is currently in its fifth year of sales growth, most due to its renewed focus on crossovers. In four years, its CUV volume has gone up 123 percent, so there’s no questioning the strategy of building vehicles in a segment that consumers continue to flock to. 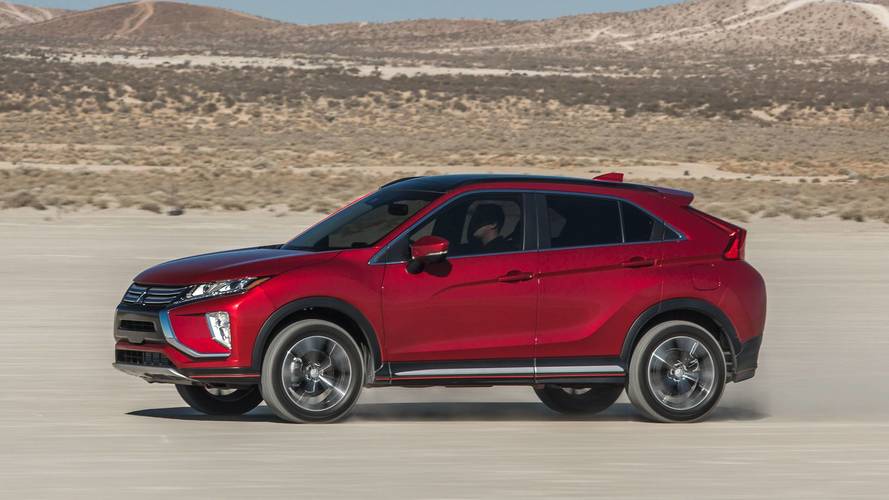 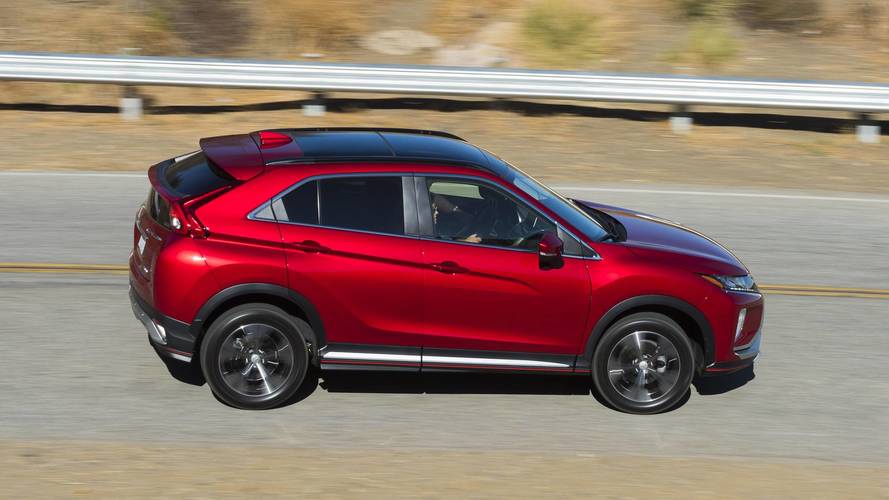 Although Mitsubishi may have missed the mark with the heritage-inspired name, luckily its Millennial targets don’t have a clue as to what the old Eclipse was like.

But as I mentioned earlier, it’s a competitive segment. And it can also be a confusing one. Vehicles that impress on matters of design, function, and performance don’t always move the most units. What sells crossovers to sensible shoppers are pricing, amenities, and to some extent, brand recognition.

The Mitsubishi Eclipse Cross starts at $24,290 but offers the best of its goodies on the higher-end models. A loaded version like the one tested here exceeds $31,000, which, frankly, feels like a stretch.

Nissan undercuts the Mitsubishi on price; Mazda offers the best driving experience; Hyundai and Kia have all the features; Honda and Toyota have the legacy of invincibility; General Motors, Jeep, and Subaru have you covered on capability. That leaves Mitsubishi scrambling to find a market gap to fill, which it’s attempting to do with heritage.

Unfortunately, the Eclipse Cross is not an Eclipse and is a less-than-stellar crossover. But although the brand may have missed the mark with the heritage-inspired name, luckily its Millennial targets don’t have a clue as to what the old Eclipse was like.

Once the Eclipse Cross goes on sale in March, Mitsubishi will most likely sell enough to warrant production of yet another crossover. So, what’s in a name? In this case, nothing.