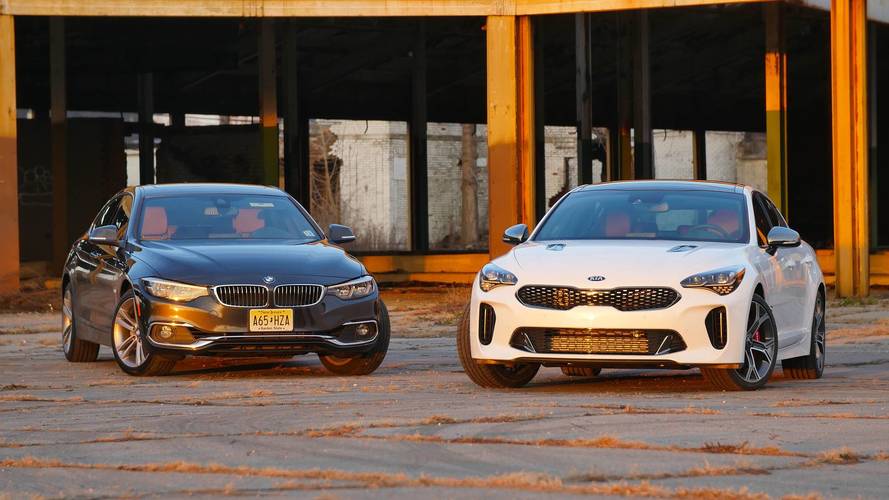 There’s a wild new child on the sports sedan block, does it measure up?

We’re not the only ones who have been pretty obsessed with the Kia Stinger since the car debuted at last year’s Detroit Auto Show. As enthusiasts, any time a new carmaker dips a toe in the sporting sedan waters, we want to know how it stacks up against the current crop of benchmark cars.

For the new Kia, competitors could realistically range all over the place. But when one thinks of good-handling, luxury-oriented sedans, BMW still springs to the top of mind. With a sleek shape, a driver-first attitude, and pricing in the mid-$40k range, the 430i Gran Coupe also matches up really well with our Stinger GT1 test car. Sure, the Kia’s a bit bigger and more powerful, but comparing the Korean to an Ultimate anything has got to make for an interesting day of driving, right?

BMW: Comparing the 430i GC to the Stinger GT1 works because the pricing and market orientation are on point, but not as a powertrain match. The BMW makes 248 horsepower and 258 pound-feet of torque from its 2.0-liter turbocharged four – or more than 100 off the Stinger’s figures in both cases. (You can buy a Stinger with a 2.0-liter turbo-four at a lower price point, but an example isn’t yet available for testing.)

With that said, in normal to sporty driving (not on a track or a drag strip), the 430i still feels pretty quick. BMW conservatively rates the 0-60 time as 5.6 seconds, and the 4 Series wins out in terms of the response and smoothness of its eight-speed automatic transmission.

Oh and, not for nothing, the smaller BMW four is much more efficient than the Kia V6, netting 23 miles per gallon in the city, and 33 on the highway, compared to 19 and 25, respectively, for the Stinger.

Kia: If you’re excited about the Stinger already, there’s good chance this 365-hp, 376-lb-ft twin-turbo V6 is a big reason why. Delivering power to all four wheels in our test car, the turbo’d motor makes the Stinger feel seriously aggressive when you floor the throttle. Sixty miles per hour arrives in about four and a half seconds here, and a manly exhaust note complements the feeling of fast with a lovely, loud soundtrack.

Sure, the automatic shifting is slightly less fluid that can be had with the German, but do you really care? Slam the gas, listen to the high-pitched ring of the turbo spinning, and get some.

BMW: Much is made of how modern BMWs are not the lithe creatures we loved in the 1980s – fair play. But the company still knows how to deliver a near-perfect balance of supple ride quality with quick-witted handling. That’s surely true of this Gran Coupe, whose suspension proved able to quell the worst impacts while driving over the beat up streets near our office. These days, 18-inch wheels are relatively demure, but the smaller stock wearing tires with a taller sidewall no doubt helped here, too.

The 430i GC delivers quick response when asked for changes of direction, with just a little roll but not much actual drama. The steering is medium-weight, precise, and rather dead on center. But ultimately one feels this sedan is up to the pace for most aggressive driving tasks.

Kia: At the very first hard corner you can find the biggest, err, “area for growth” in this new Stinger’s dynamic game. The steering is rubbery and weird, alternating between artificially heavy in sport mode, and finger-tip light in comfort. The car goes around a corner just fine, in the end, but you’ve got to learn to look past the uncouth electric-power-assist steering tune to get there.

In terms of ride quality, the Stinger is decent, but not up to BMW’s level. The standard 19-inch wheels translate road imperfections through to the driver more clearly, even wearing all-season tires. Perhaps worse is the constant clatter and thunk you hear as the suspension absorbs impact – even when the ride isn’t disturbed, the undercarriage is loud.

BMW: Exterior appearance might be the place where the character of these cars is best crystallized. The 430i is sleek, with that slightly rakish roofline that says “I’m not a 3-Series.” But this is still a conventional, conservative design, most probably attractive to a wider group of shoppers. It’s pretty, but it’s sort of a boring pretty.

Kia: About as far from “boring” as a four-door car can get, the Stinger is all big-faced drama up front, with athletic proportions made slightly goofy by the various scoops and vents Kia has tacked on. At one point I wondered if the Stinger could pull off a screaming chicken graphic on its long hood… which probably says a lot about the maturity of this design language.

BMW: Our test car couldn’t have come in a more typical BMW color scheme: my default mental image for a Bimmer cabin is this tan and black trim. The seats are fantastic; adjustable to a tremendous number of body sizes and shapes, and supportive without ever feeling over bolstered. The stock steering wheel is a little thin-rimmed (we get very used to cars optioned with M Sport everything) but nevertheless nice to use.

On the infotainment front, there’s no question that iDrive 6 is better looking, more powerful software than the Kia setup. But the 4 Series loses ground for having an older, smaller screen, charging $300 for Apple CarPlay compatibility, and leaving Android users out in the cold.

Finally, I have to say that I was surprised at how close the BMW is to the much longer (about eight inches) Stinger, in terms of rear seat room, and space in the trunk. The Kia’s space in the back is bigger, but only just.

Kia: Matching the vibe on the outside, this Stinger came trimmed in red leather with black and silver accents, which actually looked far less garish than you might expect were you just to read it. There’s a lot more elbow room in the front of the Kia than in its German rival, though head and legroom are about even. The Stinger’s pilot seat is also comfortable and supportive, though slightly less adjustable than in the 4 Series.

This is just a fresher, more modern design from the driver’s seat forward. Porthole vents add visual interest to the sweeping dash, and the big, bright touchscreen is easy to use, especially with your smartphone’s own interface. Some folks might say there’s too much black plastic up here, but overall the look and feel is split 60/40 sport/luxury. Most Americans will have to check their expectations of the Kia brand at the door.

BMW: The xDrive variant of the 430i GC starts right around $45,000, and moves quickly up from there. Our tester is actually sort of lightly optioned as far as media vehicles go, yet and still manages to nearly touch $54,000. The Luxury pack, Premium pack, and Executive pack add on $6,250 in total, for instance. Keep going with options like wireless charging, heated rear seats, or that M Sport package, and you can quickly get north of sixty grand, without even moving up to a 440i.

Kia: The Singer has a baked-in price advantage when looking at the basic cost of all-wheel drive, and all that horsepower. In Stinger Speak “GT1” equals the twin-turbo V6 and AWD, and starts at $45,450. The difference comes after the base price; our car had a $2,000 Advanced Driver Assistance pack with items like smart cruise, forward collision alert and auto braking, lane keep assist, and more. But everything else – navigation, an eight-inch touchscreen, Harman Kardon audio, in-car wifi, wireless charging, heated front seats and steering wheel, etc. – came as standard on the GT1 trim. Total damage was $48,350 for a car more completely outfitted than the BMW.

So much of deciding the winner of a test like this comes down to personal priorities. The Kia Stinger is clearly the more exciting car, with that hellacious motor, punk rock looks, and a big presence on the street. The BMW 430i GC, meanwhile, couldn’t be more different, with refinement, restraint, and access to a far more grown-up version of driving fun.

The subtle goodness of the BMW offering will probably be more rewarding over time, however. And for the majority of buyers looking at premium, stylish sedans in this price category, there’s a good chance the Bimmer is the safer bet. With that said, there is no shame in Kia’s game; for the Stinger to be this close right out of the box, makes it a winner as well. 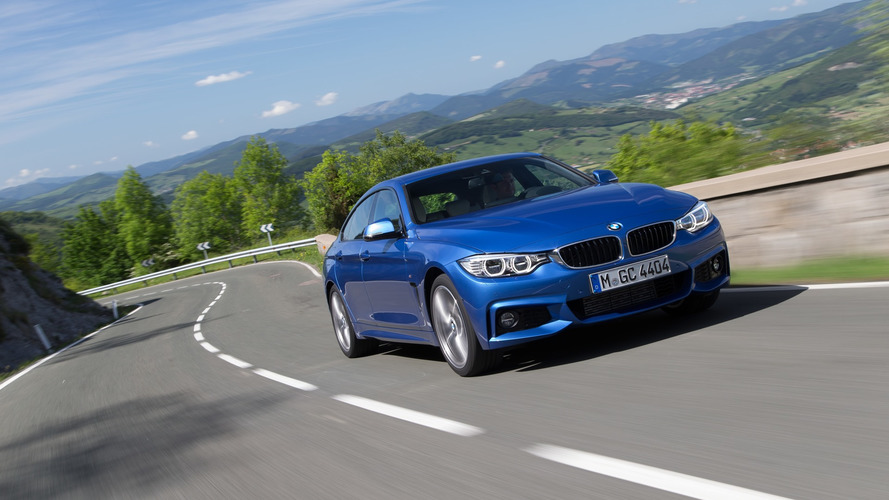