Crossovers aren’t just a fad. The body-on-frame SUV has, for the most part, gone by the wayside as unibody CUVs continue to entice suburban households with decent ground clearance, usable utility, and a bit of fashion. In fact, the crossover segment has gone beyond usurping the minivan as family hauler, by evolving in sizes from to large and subcompact. (Beware, hatchwagons – you’re next.) 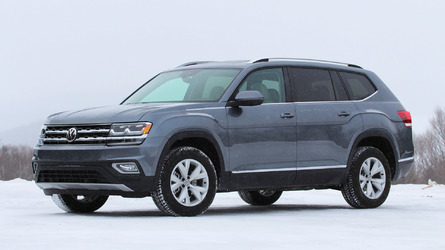 The midsize crossover remains the bread-and-butter, featuring three rows of occupancy like the barely-treading-above-water minivan. Regardless of how practical sliding doors are, how much more head- and legroom they offer, how smoother a ride, minivans are just not sexy enough.

But how sexy is a midsize crossover, anyway? Not very. Just look at them. They’re generally mundane so as to not perturb the neighbors. Case in point: the all-new, seven-passenger 2018 Volkswagen Atlas. Built in Chattanooga, Tennessee, for an American audience, this is the German brand’s first entry into the segment. And while it’s not much of a looker from any angle, suburbia (and those who think they need the space) will still fall head over pocketbook for it. 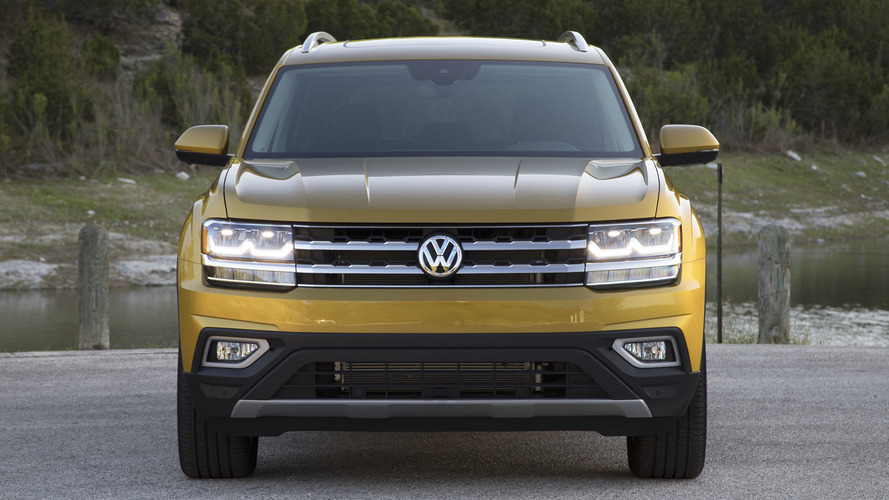 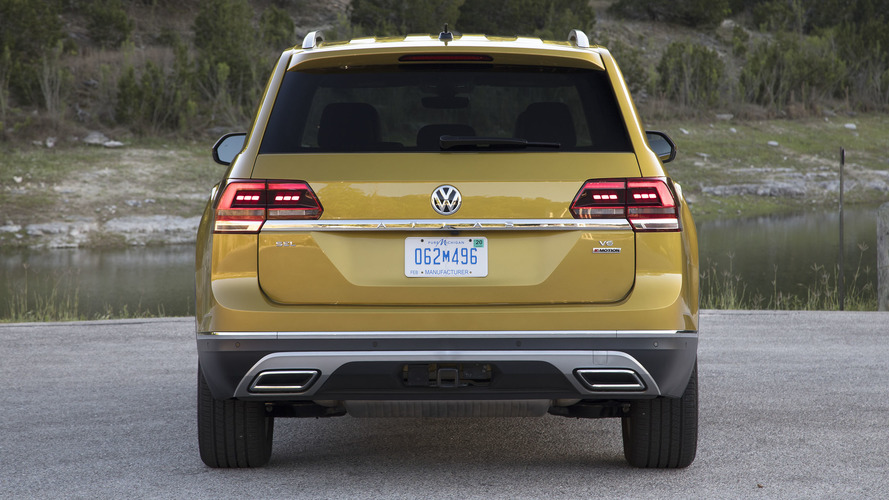 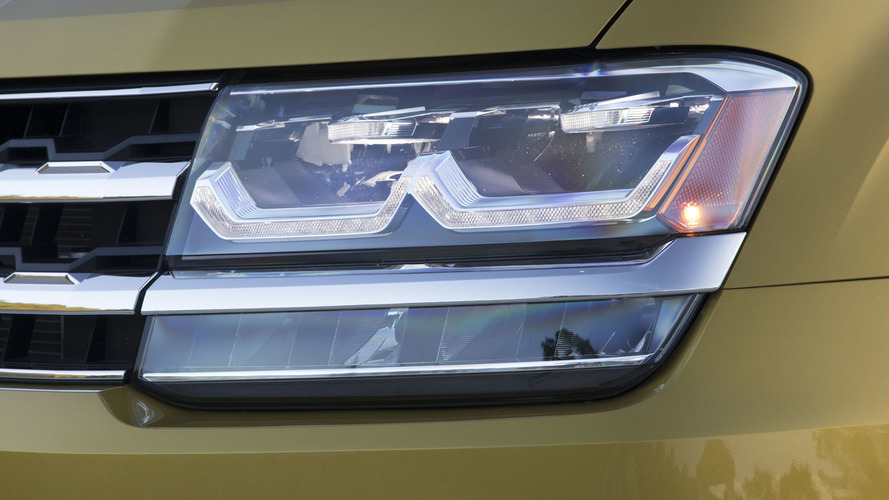 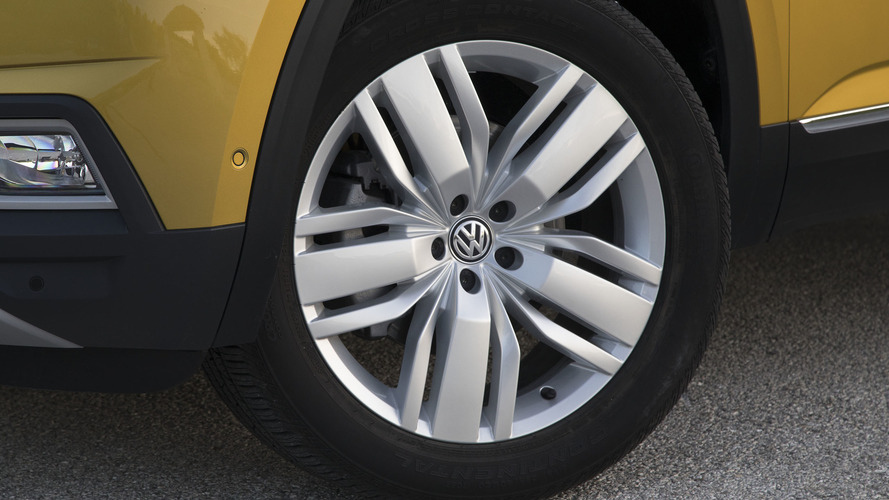 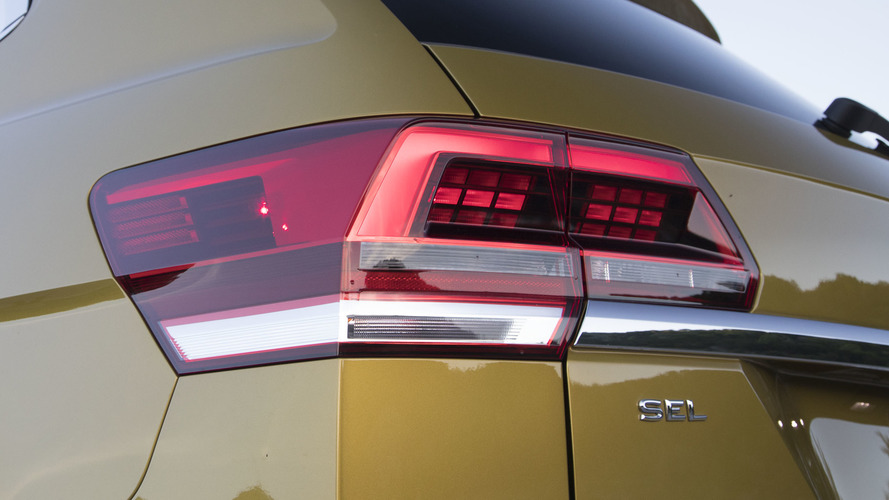 Straightforward and square is the best way to describe America’s largest VW. No curves. No sex appeal. But no issues. Even when sporting the new hero color of Kurkuma Yellow – I say Mustard Metallic – the Atlas is pretty generic. (Check out the boring shade of gray on the pre-production car our managing editor tested a few weeks ago.) Honestly, I think it looks like a Range Rover and a Kia Borrego had a sloppy one-night stand (things that make you go eww). But it’s what’s on the inside that counts, amirite?

The Atlas is vast with a clean and smooth interior. Like, so smooth that you have no idea what buttons you’re pushing because there are none on the available eight-inch infotainment glass touchscreen, just labels such as Menu, Media, and Nav. Nothing tactile, no haptic feedback. Just smooth, flat, glossy surfaces. Sure, it looks sleek but is absolutely useless while driving. If you’re behind the wheel of the Atlas and want to switch from the navigation (if equipped) to the local NPR station, you might hit Media instead of Radio or inadvertently toggle the volume knob to 11 because you can’t feel which control is which. This touchscreen dance will prove a frustrating and possibly hazardous one unless you’re at a complete stop. I hate to say it, but texting while driving a stick shift and eating a slice of pizza is easier (not that I’ve done that or anything). So, rather than fumbling fingerprints all over the shiny surface, I just turned the media off. On the plus side, it does give you an incentive to carpool.

Off the line, there is a bit of hesitation, as if the vehicle is asking you, “Are you sure you want to floor it, like, right now?”

Fortunately the Atlas is good enough to drive that I can momentarily live without music. I only had 3.5-liter V6-equipped models at my disposal because the 2.0-liter turbocharged inline-four won’t be available until later. The latter will produce 235 horsepower and 258 pound-feet of torque compared to the former’s 276 hp and 266 lb-ft. Even with no EPA mileage available on the four-banger, it’s a safe bet that it will best the V6’s 18 city, 25 highway, and 20 combined mpg. Note that all-wheel drive is only available on V6 models, and this 4Motion AWD tester is EPA-estimated to offer 17 city, 23 highway, and 19 combined mpg. No, it’s not the best fuel economy of the segment (it’s in the middle) since the Atlas is one of the heaviest (its 4,502 pounds in AWD trim is skinnier than only the Toyota Highlander’s 4,655 weigh-in), but it certainly is one of the better driving midsize crossovers.

Equipped with the segment’s only standard eight-speed automatic (the higher-trim Honda Pilot Touring and Elite models snag you nine speeds), the Volkswagen Atlas shifts rather smoothly. Off the line, there is a bit of hesitation, as if the vehicle is asking you, “Are you sure you want to floor it, like, right now?” Um, yes, Mom, I am sure. And I wouldn’t complain if there was more low-end torque, but maybe it’ll feel funner with the turbocharged I4. Either way, the V6 is more than capable and handled my drive route through Texas Hill Country just fine. Parentals and babysitters alike will have no trouble getting to speed or passing large semis and small sedans with confidence. I was actually more disappointed in the overall test route than the vehicle, hoping for more dynamic roads. But that’s probably more interest in handling than the average crossover customer cares about. 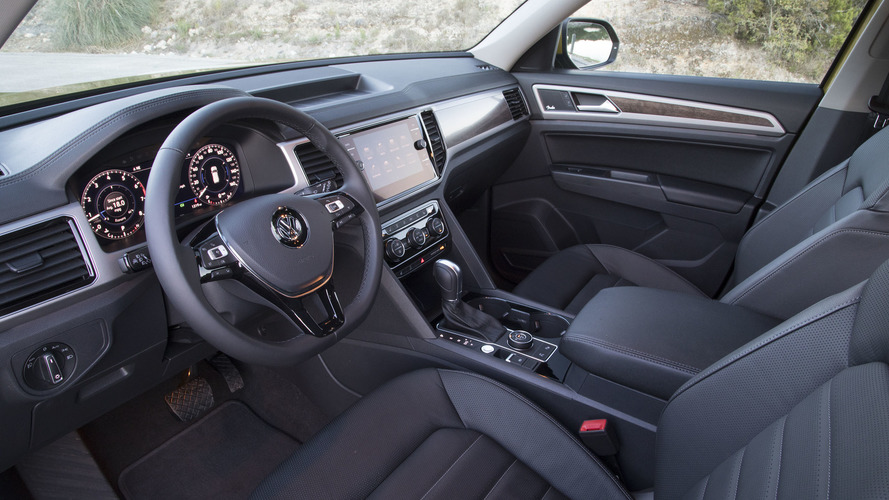 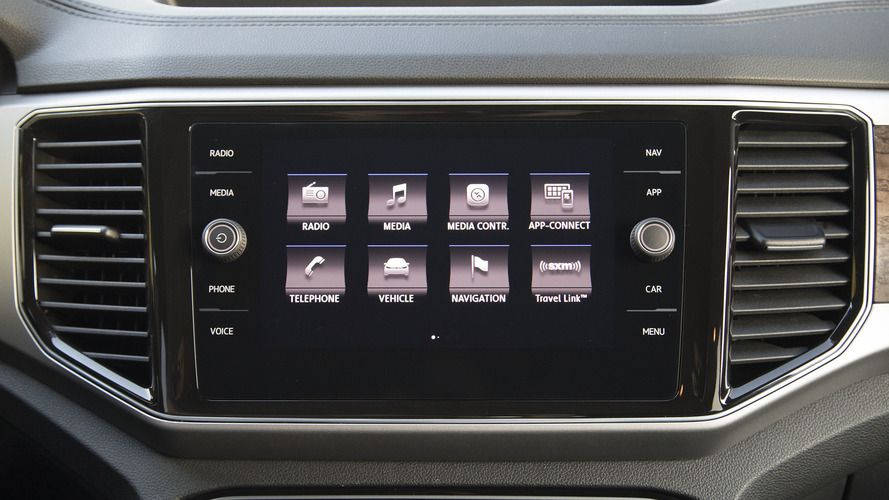 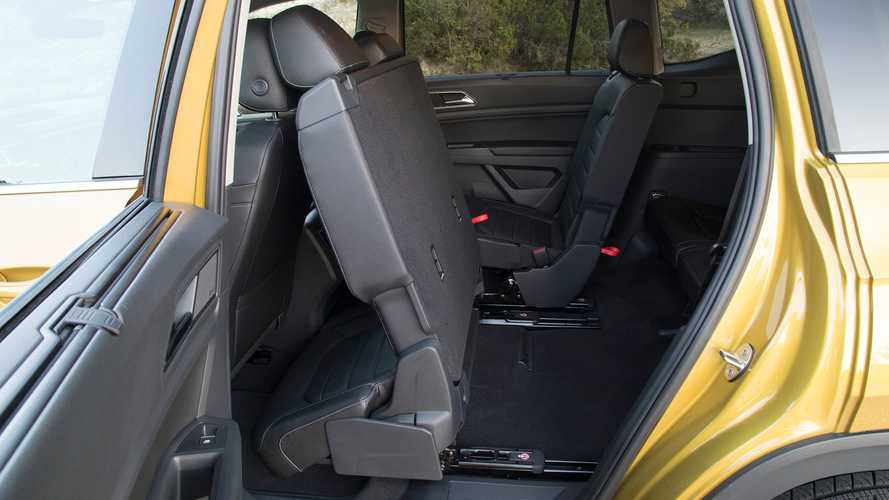 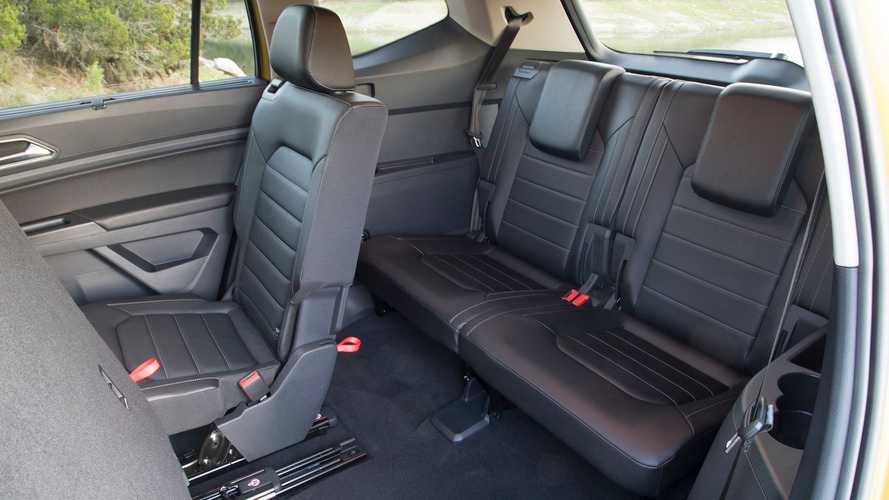 That being said, the Atlas does sit on Volkswagen’s Modular Transverse Matrix (MQB) platform, which was first seen in the Golf and will next outfit the new Tiguan. I did sense some body roll but nothing to wince at. After all, I was driving a box. However, the steering isn’t numb and everything overall is, well, good. Other than style points (or lack thereof), the Atlas is an all-around composed vehicle. You can even disable the driver assistance nannies, like the somewhat aggressive lane assist, to make the drive even more enjoyable. But even if it doesn’t hands-down win the fun-to-drive crown (hi, Mazda CX-9), Volkswagen’s latest vehicle definitely earns a podium finish on midsize utility.

The second row does have a 7.7-inch fore-and-aft sliding range but if you’re taller than average, the third row will feel like a last-row airline economy seat buttressed against the lavatory.

At 198.3 inches in length, 70.0 inches in height, and 78.3 inches in width, the Atlas is roughly the same size as a Ford Explorer, but offers a much bigger interior cavern. With 96.8 cubic feet of cargo space with the second and third rows folded flat, you can go big and be at home in the Atlas. Seriously, no one else comes close. The Pilot’s 83.9 cubic feet of cargo utility is a distant second. Headroom is a breathable 41.3 inches in front, 40.4 inches in the middle, and 38.3 inches in the far rear. And a nifty trick of the second row is that it can tilt and fold forward even with a child seat in place. Put three seats in that row, and they all bend forward allowing for easier ingress and egress to the third row. But remove the kiddies first, duh.

Still, a crossover’s third row is cozier than a minivan’s. My six-foot-two-inch co-driver and I sat in the third row and both of us felt, uh, closer than ever. It’s a good thing we’re actually friends or it might’ve been a contortionist-esque fight for space. The second row does have a 7.7-inch fore-and-aft sliding range but if you’re taller than average, the third row will feel like a last-row airline economy seat buttressed against the lavatory. At least it doesn’t smell like it.

Though, one annoying thing to point out about the third row that has nothing to do with a passenger’s size is those second-row sliding tracks, which make the right-rear seat the worst seat in the Atlas house. Because the second row is a 60/40-split bench, its sliders are positioned in a way that the third row’s right-side passenger’s left foot will either rest on the tracks, manspread into the left-hand passenger’s foot well, or lean farther to the right side than is comfortable. Only put people you dislike back there, or those with a high tolerance for awkward seating positions. 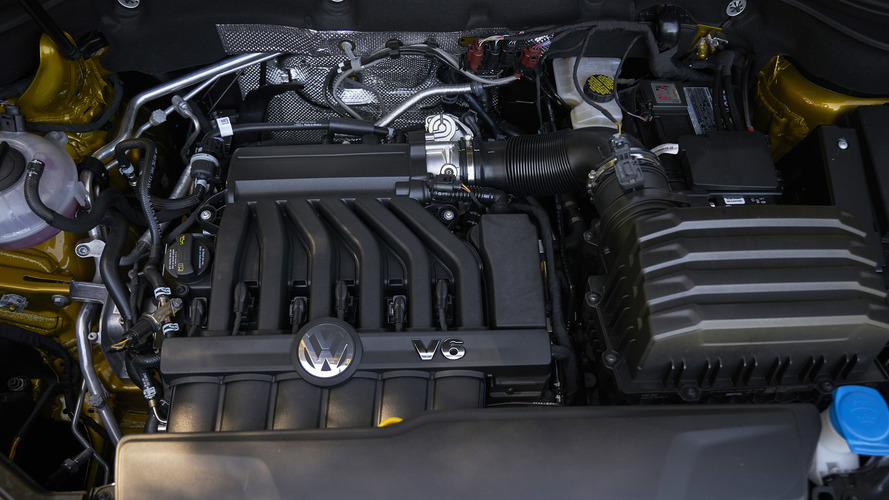 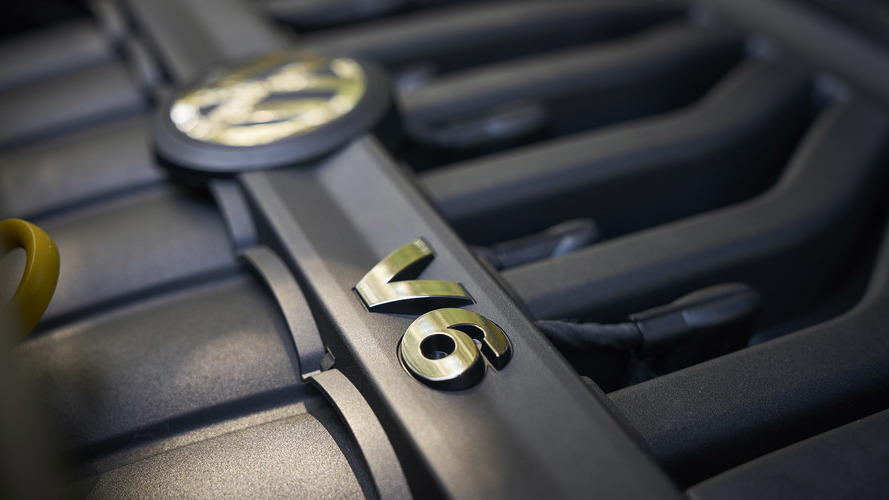 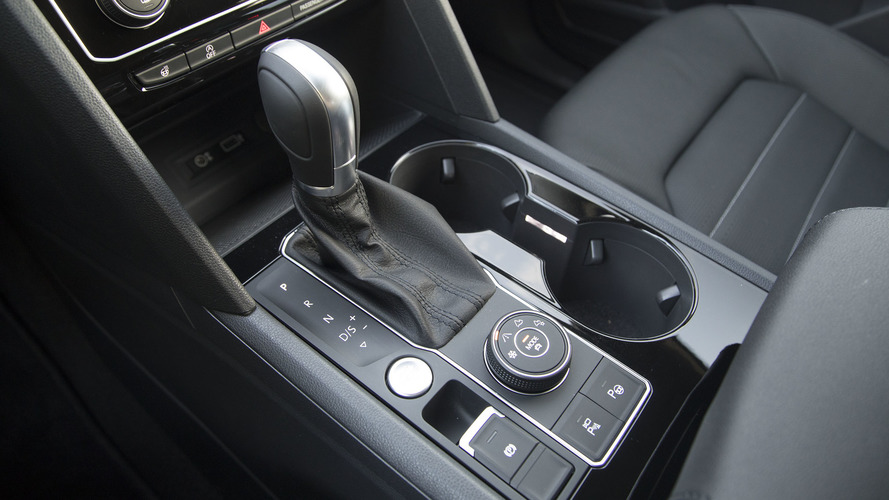 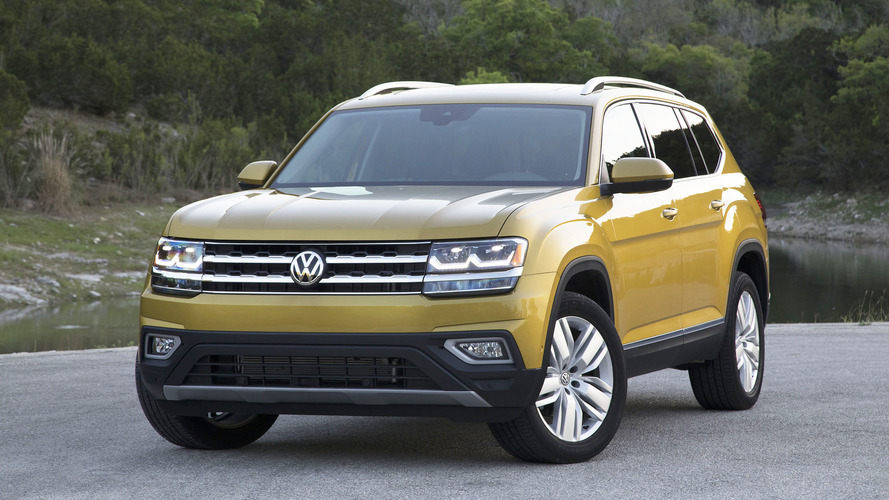 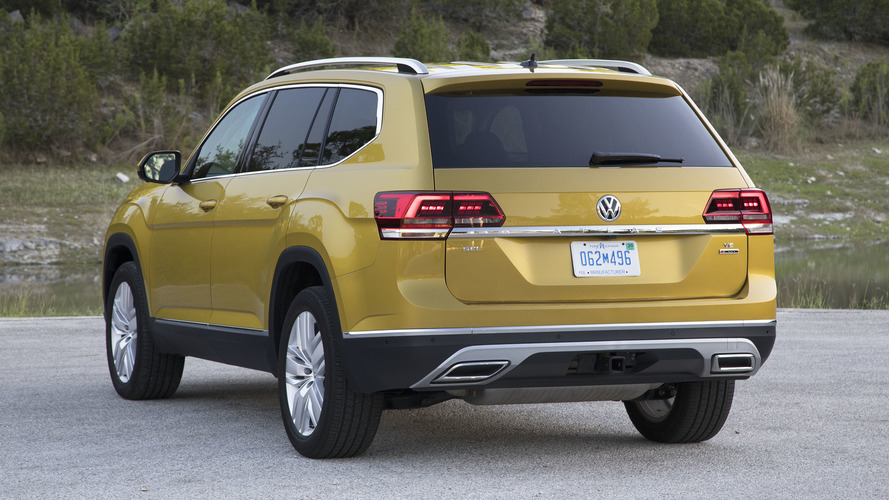 On sale this spring, the Volkswagen Atlas will start at $31,900 for the front-wheel-drive S trim with the V6 engine, and $33,700 for AWD S versions. The 2.0L turbocharged I4 will arrive after launch, and start at $30,500. Standard equipment is impressive with full-LED front lighting, 18-inch wheels, start-stop technology, a 6.5-inch multimedia color touchscreen, a six-speaker sound system, Bluetooth connectivity, VW App-Connect smartphone integration, and all-important safety features such as a rearview camera and automatic post-collision braking.

The Atlas is a literally huge leap for Volkswagen, targeting what seems like a never-ending North American sales surge for SUVs of all dimensions. Even with new models cropping up and new sub-segments growing with them, there appears to be plenty of room for it in the crossover world. With lots of premium features at all price points, capable handling, and more space than the average American household actually needs, the Volkswagen Atlas is a competitive crossover entry.