Swapping a supercharger for a turbo and adding loads of comfort and tech, Audi’s new S4 sedan is better than ever.

There is a long stretch of road in the mountains outside of Palm Springs where the 2018 Audi S4 really shines. Its new, turbocharged engine takes deep breaths of air and sends a wallop of power to all four wheels. The S4 is flat and agile, ascending and descending the mountain roads with an urgency that begs you: Just. Keep. Going.

It is an impressive driver’s car, this S4. But the big reason to love is that it isn’t just an enthusiast’s tool. The sedan strikes a wonderful balance between aggression and comfort; to use the tired Goldilocks analogy, the S4 is not too hot, but not too cold. It offers tremendous fun on the right road, but buttons up and puts on a tie for commuting and general city driving. Nothing about that formula is upset with this new 2018 model – it’s still a great luxury/sport sedan, packed with Audi’s latest arsenal of performance chops and premium tech. 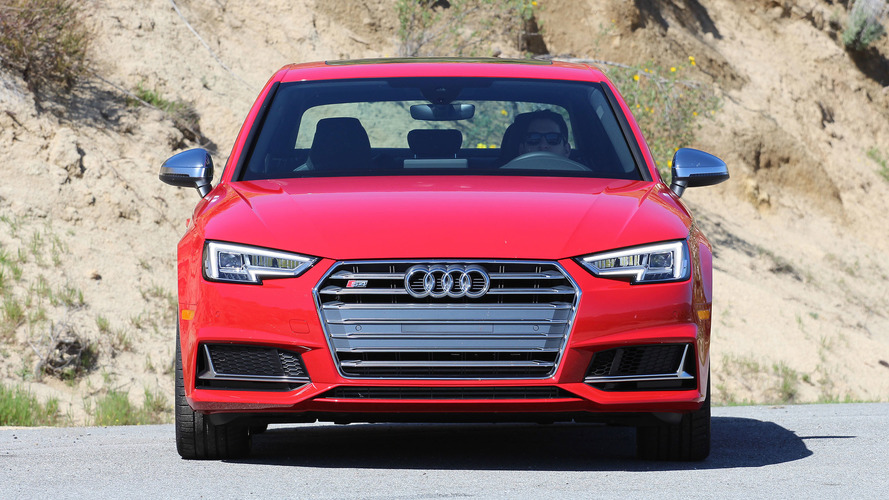 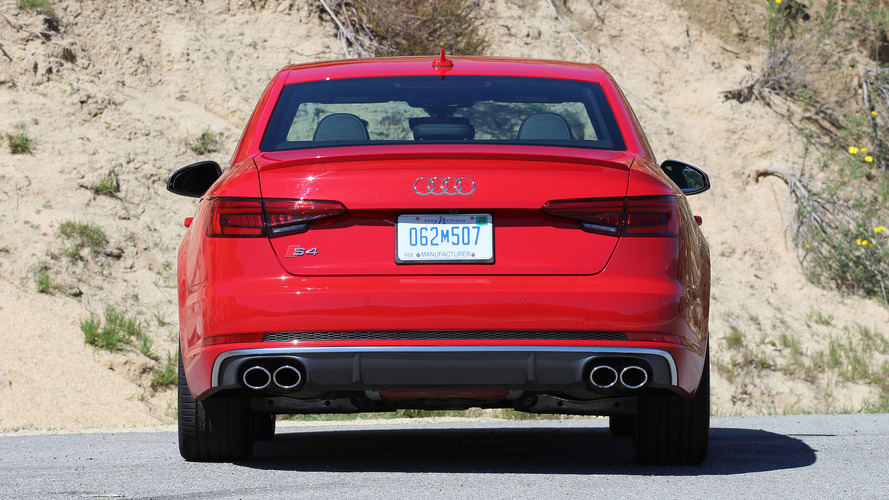 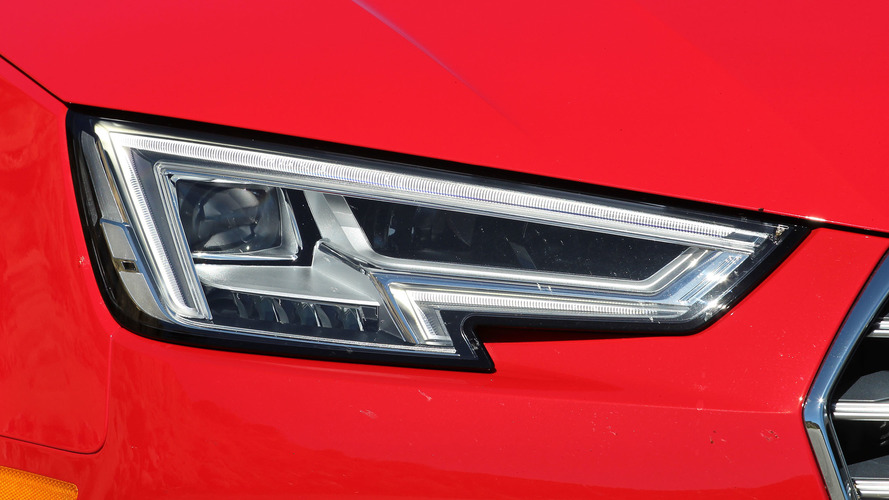 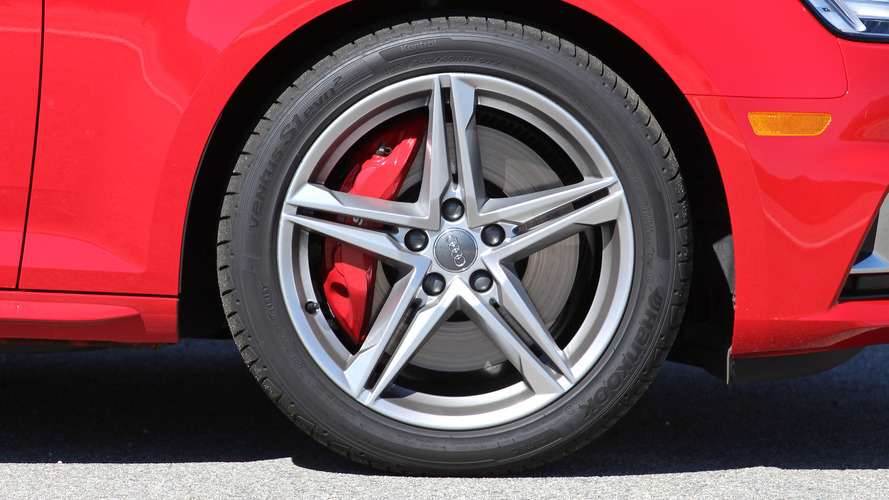 If you like the handsome new lines of Audi’s fifth-generation A4, you’ll find nothing to complain about here. In fact, the S4 only offers subtle design tweaks to differentiate itself from lesser models, the most notable of which are the larger air intakes that bookend each side of the front fascia. A reshaped rear bumper houses quad exhaust outlets out back. And from the profile, only those red brake calipers – part of the $2,500 S Sport package – are the dead giveaway this isn’t just a top-trim A4.

There’s a similar strategy inside the cabin, where A4 becomes S4 with only minor changes. S Sport seats are fitted as standard, with diamond-pattern stitching on the leather, and standard heat and massage functions. Alcantara trim lines the doors. Aluminum or faux carbon fiber elegantly accent the various leather upholstery hues. Audi’s lovely Virtual Cockpit infotainment interface sits front and center behind a thick, leather-wrapped steering wheel, and features a new “sport” display in the S4. A digital speedometer and tachometer in the middle are flanked by customizable performance or general-information data on the left and right panels.

If you like the handsome new lines of Audi’s fifth-generation A4, you’ll find nothing to complain about here.

Nestled inside the comfy cabin of the S4, I’m hard pressed to find fault. From the simple climate controls to the large dial for the MMI Touch interface, everything is organized in clean simplicity. There’s ample room in front or rear for adult passengers; the A4 is a larger car than you might think. I could easily live with this modern, techy cockpit every day, though I still find the Mercedes-AMG C43’s accommodations to be a bit more plush, overall. Road and wind noise are nearly absent, even at higher speeds along breezy Interstate 10, heading out of Palm Springs.

Gone is the supercharged V6 from the last-generation S4, in its place a more powerful and modern 3.0-liter V6 with turbocharged assist. The engine is some 31 pounds lighter than the outgoing lump, and uses a single, twin-scroll turbocharger to deliver maximum performance at lower revs. The result is 354 horsepower and 369 pound-feet of torque – gains of 21 hp and 44 lb-ft compared to the previous S4. Audi quotes a 0-60 time of 4.4 seconds, which is not only half a second quicker than the old S4, but 0.2 and 0.4 seconds quicker than a comparable Mercedes C43 or BMW 340i xDrive. 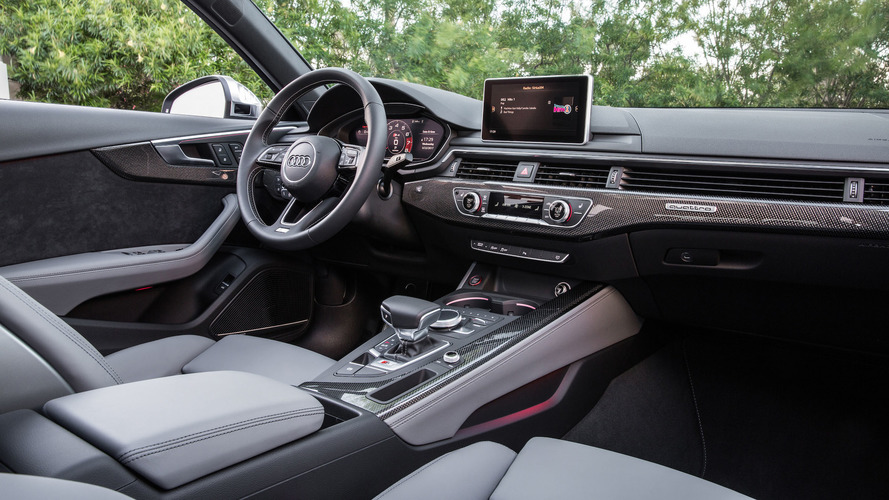 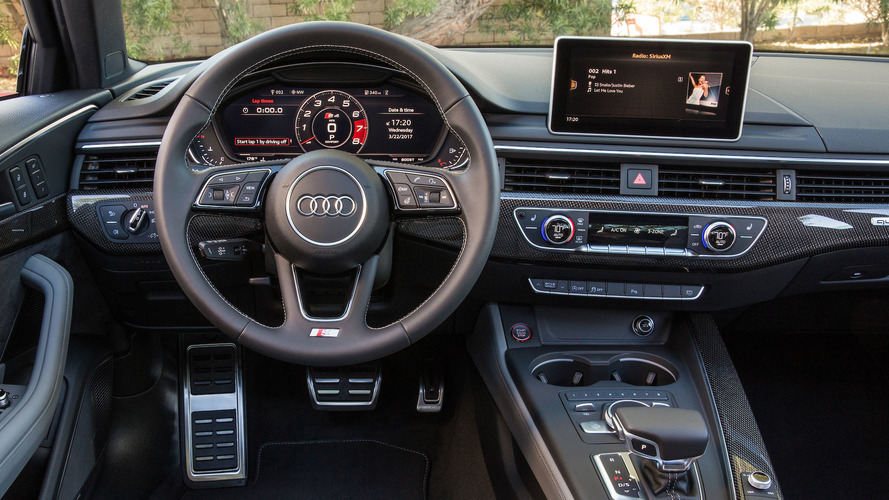 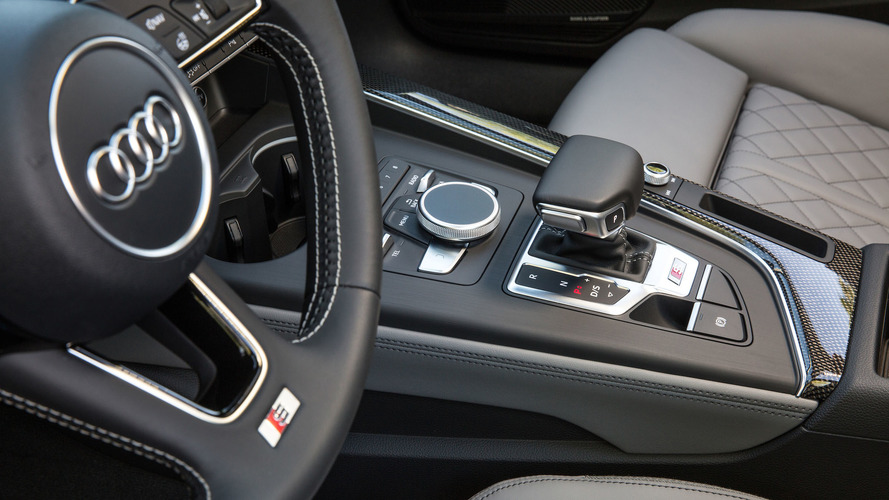 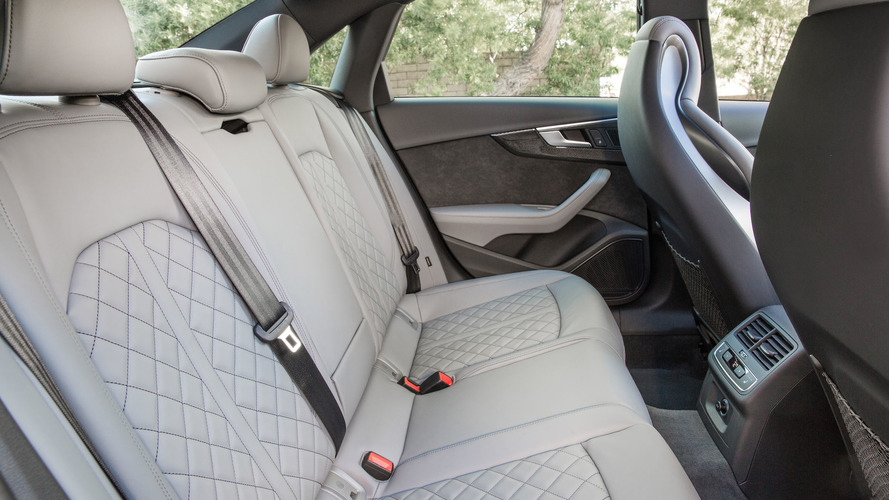 That huge wad of torque hits you right at 1,370 rpm, so the S4 genuinely feels quick off the line. In fact, at any speed, digging into the throttle unleashes a wave of power no matter where you are in the rev range. The twin-scroll action keeps the turbocharger on boil, so there’s no lag to speak of. And while the 354 hp doesn’t quite peak until 5,400 rpm, there’s ample boost at lower revs in each gear to keep you satisfied.

Rather than a dual-clutch setup, Audi uses its new, eight-speed Tiptronic automatic transmission here – the same one from the RS7. Simply put, the conventional automatic’s torque converter allows for smoother starts at city speeds, and shift quickness and accuracy is comparable to DCT setups. Whether left to its own devices or activated by the steering wheel-mounted paddles, the eight-speed auto changes gears with succinct precision. It also helps the S4 return as much as 30 miles per gallon on the highway… if you lay off the throttle.

Driving spiritedly is where the S4 truly shines; if you aren’t going to open it up every now and then, I promise you’ll be just as happy with a high-spec A4.

Whether in stop-and-go traffic, out on the highway, or hustling along winding roads at high elevation, the S4 is well-suited for a lot of driving styles. But that doesn’t just come naturally. I’m actively switching between Auto and Dynamic modes in the car’s Drive Select system, because the differentiation in personalities here is wider than in many other Audis I’ve tested. Auto is great for around town and commuting, but if enthusiastic motoring is in your future, absolutely toggle into Dynamic, where everything gets louder and more urgent.

Along the same lines, I strongly recommend the $1,500 dynamic steering option, with its variable ratio setup. Here, weight builds progressively and naturally, with good amounts of feedback. Left in Auto, or without the dynamic steering, the S4 reveals a pretty sizeable on-center dead spot – something common in a lot of Volkswagen Group products. It doesn’t ruin the driving experience, necessarily, but if canyon carving is high on your sport sedan to-do list, I recommend opening your wallet a little wider. 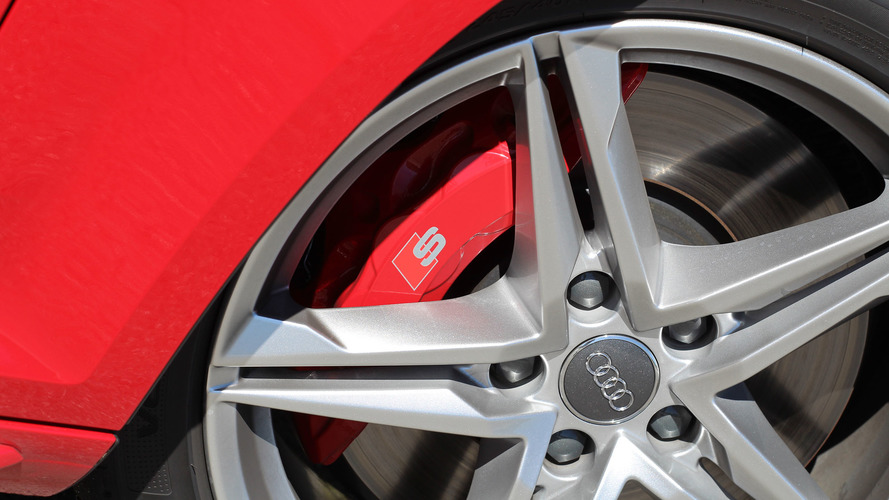 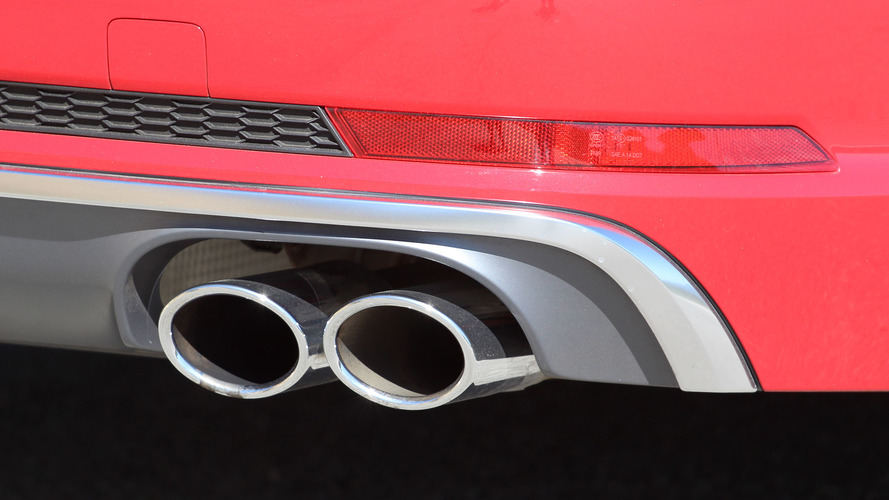 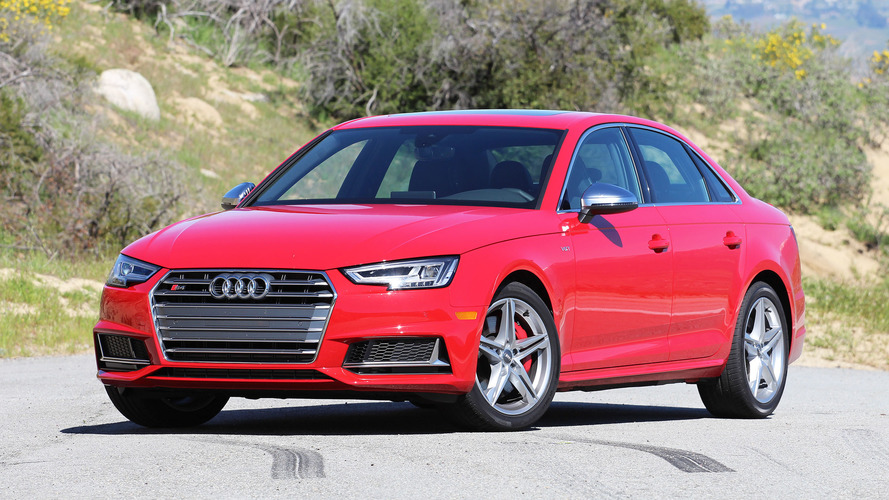 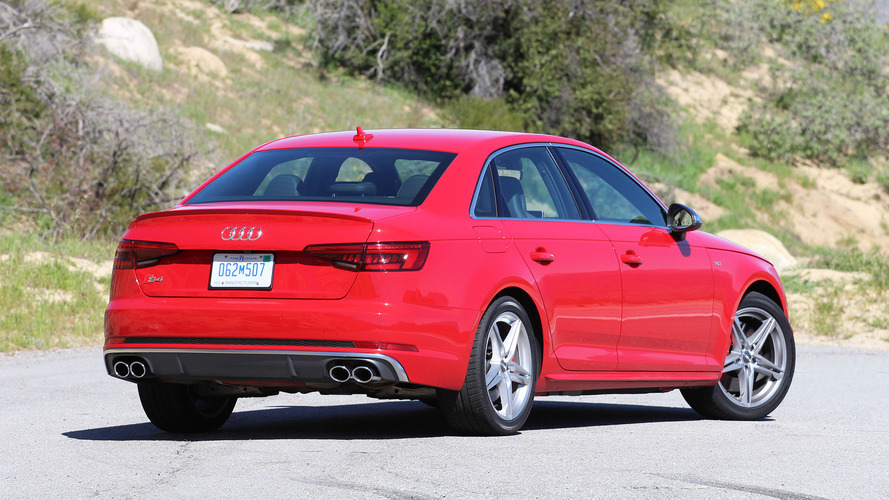 The standard 18-inch wheels on 245/40-series Hankook summer tires offer a controlled, confident ride quality, though I’m left wishing for a touch more rear end grip during hard cornering. The S4’s nose stays composed and hunkered-down, the Quattro all-wheel-drive system managing power to all four wheels with silent accuracy. The car’s dynamic dampers do a fine job of managing pavement imperfections regardless of wheel size. I didn’t have an opportunity to drive an S4 on its optional 19-inch wheels, though a later test of an S5 with the bigger wheel/tire package didn’t reveal any serious differences in terms of ride quality or grip.

Driving spiritedly is where the S4 truly shines; if you aren’t going to open it up every now and then, I promise you’ll be just as happy with a high-spec A4. Audi’s sport sedan is far more engaging and agile than a BMW 340i, though the Mercedes C43 gives it a serious run for its money – I’d have to drive the two back to back before picking a favorite. With prices starting at $50,900 and running as high as $60,000 fully loaded, you’ll pay a little less for the Audi than you will an equivalent Mercedes – something to keep in mind if you’re not loyal to a specific brand. And considering how nicely equipped the S4 comes on the base end – there really aren’t many options – it’s easy to walk out with a fine example of Audi’s newest S-machine in the mid-$50k range.

That’s not bad for a car so versatile. A stronger, more efficient powerplant and better dynamic underpinnings don’t upset the perfect balance between sports car and luxury sedan that’s always made the S4 so popular.