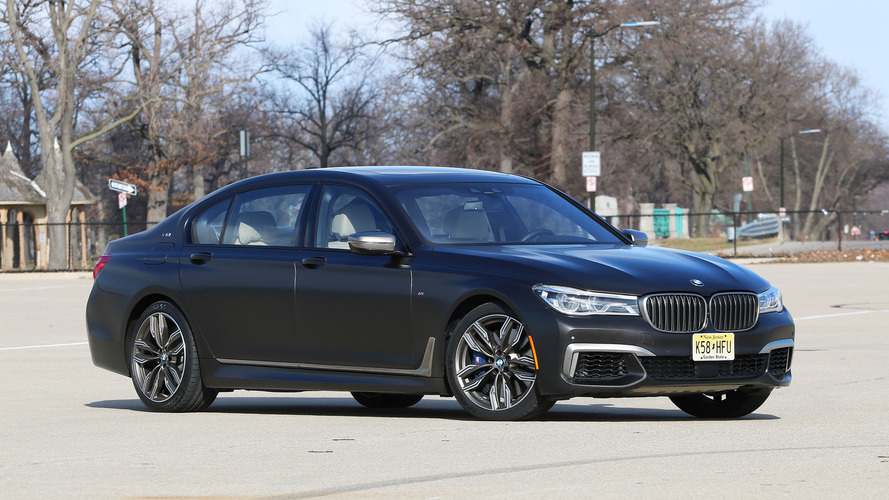 Able to be both a rocket ship and an ocean liner, the M760i has an impressive breadth of abilities.

Half a second. That’s how much longer you’ll wait for the BMW M2 – that darling of every car enthusiast and automotive reviewer – to reach 60 miles per hour after this M760i hits the benchmark. That’s a testament to the epic power on offer from the biturbocharged V12 engine under the hood of this 5,128-pound luxury sedan.

The BMW M760i is not, however, a one-trick pony of straight-line speed alone. It’s also an incredibly sumptuous vehicle, filled with features to make your journey as pleasant as possible. That bandwidth of capability, from autobahn stormer to executive chauffeur, is what makes this version of the 7 Series so impressive.

Beefy V12 engine when you want speed. With two turbochargers blowing into the 6.6-liter engine, the M760i unleashes a 590-pound-foot tidal wave of torque with ease. Not only is it remarkably quick off the line for such a big, heavy luxury sedan, the BMW keeps building steam effortlessly at speed. It’s the type of car that makes it all too easy to squirt through any gap in traffic and storm on-ramps so fast you might even need to brake before merging. All this, by the way, without even a hint of lag, surging, or vibration from the engine bay.

Incredible comfort when you want to chill. Set the BMW to Comfort mode and it instantly sheds all pretenses of speed. The air suspension softens up to quench any jostling from the road, and the cabin keeps unwanted noise to a minimum so you can better appreciate the ultra-crisp Bowers & Wilkins sound system (a $3,400 option). In Comfort mode, the M760i is as easy to drive as any other (smaller, cheaper, less powerful) BMW, and no less uncomfortable or unpleasant. It’s an impressive feat given the aggression of this car’s acceleration.

Loaded with technologies. Do I find it useful to be able to change the radio volume with gesture controls? No, but it’s cool. Is it useful that the multicolor ambient lighting extends to the sunroof glass? No, but it’s cool. Nor do I need a selectable fragrance to waft through the air conditioning or multi-mode massaging seats. But the 7 Series is a smorgasbord of all the best, newest technologies that BMW can fit to a car, and I love being surrounded by all those toys.

Rear-wheel steering helps in a literal pinch. This is a long car with all-wheel drive, but rear-wheel steering really improves maneuverability at low speeds. It’s just enough to keep parking this car from being cumbersome when space is at a premium.

Not particularly engaging. For all the performance parts fitted to this car, BMW engineers forgot to add some soul. The M760i absolutely devours roads, whether straight or winding, but rarely does it thrill me with urges to keep driving it for hours on end. There’s too much capability for me to get filled with adrenaline when behind the wheel. You get the sense this car would only be happy streaming down the outside lane of the autobahn.

Touchscreen key. The BMW Integrated Key Fob, a version of the car’s key with a tiny touchscreen interface, feels like a solution in search of a problem. The idea is you can find updates on the car’s status remotely – is it locked, are the windows closed, etc. But the key can only communicate when it’s very close to the car, so you don’t get regular updates from, say, your desk. The key must also be recharged regularly, either by Micro USB port or by putting it in a specific part of the center console. There’s also no key ring attachment, so it must sit in your pants pocket or purse separately from the rest of your keys. What was wrong with a normal key?

Bring lots of cash for gas. A $1,700 gas-guzzler tax and a 16-miles-per-gallon combined rating are constant reminders that there are twelve cylinders working away under the hood. Maybe if you can afford this car you don’t care, but still.

What about Alpina? The Alpina B7 pretty closely overlaps with the M760i in BMW’s lineup. The Alpina has one fewer horsepower and the same amount of torque as the M760i, but from a biturbocharged V8 instead of a V12. Its quoted 0-t0-60-mph time is the same, at 3.6 seconds. But it starts at a far more affordable price than the M760i, with a base price that’s $23,800 lower. It makes this car a far harder sell when the Alpina delivers essentially all the same performance for a whole lot less cash.