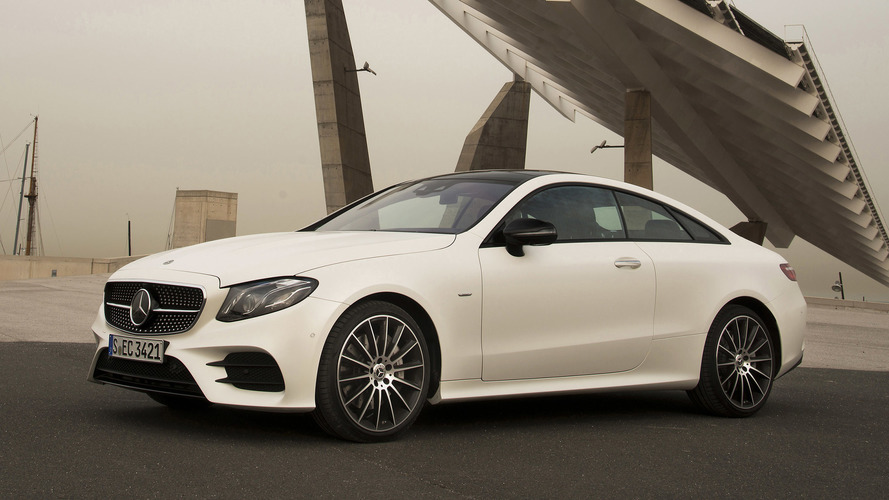 Supremely easy to drive and spacious enough to bring your friends, the new E-Class Coupe is a joy.

The new Mercedes E-Class Coupe is most at home on fast, flowing Spanish highways. The four-seat coupe cossets its passengers in a lovely cabin; keeps road and wind noise to a minimum; accelerates, brakes, steers, and even changes autonomously; and powers away from toll booths with an ultra-smooth, torquey V6 engine. It is a first-class executive conveyance that just happens to be bundled in a very pretty two-door wrapper.

Based on the E-Class sedan we know and love, the Coupe strikes a far more evocative look. Like the C- and S-Class coupes that bookend it in the Mercedes lineup, the roofline plunges down toward a rounded rear with big shoulders above the back wheels. From behind the car, it’s noticeable just how much the greenhouse tapers toward the back of the E-Class, and also how sharply angled inward the windows are, all of which helps with aerodynamics. Clean body sides are broken up only by two subtle character lines, while the nose recapitulates Mercedes’ classic large-grille look, with smart headlights at either side that extend onto the front fenders.

The car’s wheelbase is actually 2.6 inches shorter than that of the sedan and it has a 0.6-inch lower ride height, while the track width has increased 2.7 inches compared to the outgoing E Coupe. All that lends the car an aggressive, planted stance on the road.

There’s no B pillar, so with the windows lowered, the profile view shows an expansive opening that lends the E Coupe a serious sense of openness and style. With the dark sunroof, though, there’s only a small body-colored section at the back of the car, and the contrast is really noticeable from above the E Coupe. It might look better were that painted black so as to not to stand out so much next to the tinted sunroof.

The drag coefficient is a slippery 0.25, down from 0.27 in the old car, thanks in part to wind-cheating efforts like a grille shutters, improved seals around the headlights and front doors, are more aerodynamically shaped mirrors.

There’s no B pillar, so with the windows lowered, the profile view shows an expansive opening that lends the E Coupe a serious sense of openness and style.

At 190.0 inches end-to-end, this E-Class Coupe is nearly half a foot longer than its predecessor, improving interior room in both rows of seats. It’s probably a safe bet the majority of these cars will only ever have one or two occupants, but the ability to fit fully grown adults is still an important selling point. Rear legroom is up 2.9 inches from the old E Coupe, while rear headroom has increased 0.6 inch and shoulder room is up an impressive 2.0 inches.

All told, it’s now spacious enough that I can sit in back without slouching or scrunching my knees up to my chin. Mercedes also claims there’s more leg- and headroom in back than in the E Coupe’s only real rival, the BMW 6 Series. While we don’t yet have hard numbers to do an objective comparison, I can tell you subjectively the E-Class is far roomier than the cramped BMW.

Other parts of the cabin carry over from the rest of the E-Class line, which is a good thing. From the driver’s seat, you stare directly at a 12.3-inch full-color display that serves as the instrument cluster. There are three display modes to choose from, two of which emulate physical two-binnacle instruments, and a third, called Progressive, that shows lots of driver-assistance data with fresh, futuristic graphics. A color head-up display provides more information, including speed-limit and navigation prompts, that appears to float above the hood.

In the center of the dashboard is a second 12.3-inch display for the Comand infotainment system. With gorgeous graphics, quick responses, an intensely logical menu structure, and now support for Apple CarPlay and Android Auto, it’s nearly flawless in operation. There are, of course, now so many different ways of operating the system: the touchpad and the vestigial control knob on the center console, the new thumb controls on the right-hand side of the steering wheel, and voice commands. Other center-console buttons concern the various driving modes (Eco, Comfort, Sport, Individual), radio volume, raising the vehicle’s ride height (for models with air suspension), and so on.

While we don’t yet have hard numbers to do an objective comparison, I can tell you subjectively the E-Class is far roomier than the cramped BMW 6 Series.

The real treat, though, is from getting behind the wheel. The biturbocharged V6 is familiar from dozens of other Mercedes models, with 329 horsepower and 354 pound-feet of torque, but familiarity hasn’t bred contempt. It’s impeccably smooth even pushed toward its redline, pulls enthusiastically from low revs thanks to quick-responding turbochargers, and works in perfect harmony with the slick-shifting nine-speed automatic. Acceleration is more or less effortless, and while the subdued engine note is probably ideal for most potential E Coupe owners, it saps much of the excitement and involvement out of brisk driving.

At speed, most outside noises are capably filtered out before they reach occupants’ ears, though there’s a little wind whistling off the mirrors. With the suspension set to Comfort mode (adaptive dampers are optional, and adaptive air suspension is another option), the chassis ably copes with choppy roads, too, but avoids floatiness. Doing 130 kilometers per hour (81 miles per hour) in the outside lane of Spain’s autovias is quiet, relaxing, and easy.

As in most versions of the new E-Class, steering feedback is pretty much nonexistent, but the way the weighting builds with speed and steering input imparts great confidence. It’s unerringly precise and easy to position – critical when threading such a wide vehicle through teensy Spanish villages.

But those types of roads remind me that this E400 is a tourer rather than a sports coupe. There’s a lot of car to rotate through a bend, and even with the adaptive dampers or air suspension (depending on trim level) tightened up in Sport mode, the coupe is capable rather than scintillating through winding roads. Body roll and pitch are essentially eliminated, which is good, but there isn’t a great sensation of speed.

On the move or parked, the E Coupe is a technological marvel. It introduces Magic Vision Control to the E-Class range. That’s Mercedes’ name for clever heated wipers that very precisely spray water into fine jets on the windshield, reducing the amount of time your vision is obscured when cleaning the windshield. It’s already offered on other Mercedes models and works a treat; there’s no splashing or pooling of water in your field of view when you spritz the windshield. The LED taillights, too, have a new “welcome” feature, glowing in a pretty sequence when you unlock the car. They also automatically dim at night if they’re likely to dazzle a trailing driver. But Mercedes officials can’t yet confirm whether those features will make it to the U.S., owing to our country’s ferociously inelastic approach to car lighting regulations.

It’s more than capable of setting a rapid pace through twisting roads or down the freeway. But it’s best suited to cruising easily, comfortably, and stylishly.

As on the E-Class sedan, the coupe has semi-autonomous features abound. Drive Pilot Distronic adaptive cruise control has Steering Pilot, which can help steer the car within its lane for brief periods, plus Active Lane Change Assist, which will automatically change lanes when the driver uses the turn signal. And Evasive Steering Assist adds steering torque when it detects that the driver is attempting to avoid an obstacle.

Though exact pricing hasn’t been confirmed yet, the new E-Class Coupe shouldn’t cost too much more than its predecessor when it reaches the U.S. this summer. For the rear-wheel-drive E400, expect a list price somewhere around $56,000, with the all-wheel-drive E400 4Matic potentially starting somewhere around $60,000. Standard equipment on both includes powered leather seats, a sunroof, the 12.3-inch Comand screen with navigation, 64-color LED ambient lighting, push-button start, a backup camera, and Car-to-X vehicle-to-vehicle communication. The many available option packs include the aforementioned semi-autonomous drive features, a head-up display, wireless phone charging, massaging seats, the 12.3-inch digital instrument cluster, and air suspension. And, of course, various different wheel, color, and interior trim choices are on offer.

As to more performance, we probably won’t get an E63 variant of this car, but an E43 model – potentially with the same 396 horsepower as the sedan – seems possible. Still, if you want a sporty coupe, you should look to the C63 or S63 coupes on either side of this E-Class two-door.

That gets the bottom of where the new E400 Coupe fits into the Mercedes-Benz range. It’s more than capable of setting a rapid pace through twisting roads or down the freeway. But it’s best suited to cruising easily, comfortably, and stylishly. Mercedes likes to cite the BMW 6 Series as this car’s only real competition, but it’s no contest: The E Coupe is roomier, prettier, fitted with better technology, and far more satisfying to drive. Like every other E-Class model to date, the Coupe is the best in its class.