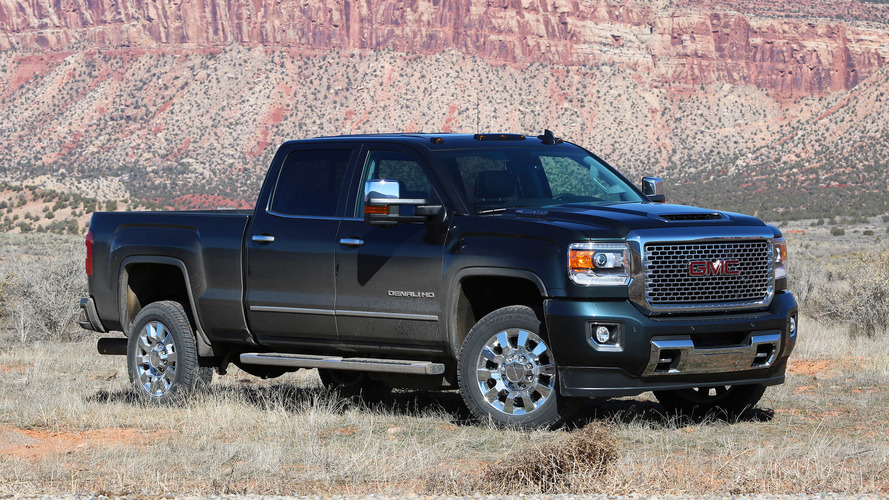 A stronger yet cleaner-burning diesel engine provides even more capability for the heavy-duty truck.

“We’re going to have to turn around.”

Not because this 2017 GMC Sierra 2500 Denali couldn’t tow 5,000 pounds up the approaching steep hill, but because the 26-foot trailer attached to it would never get around the tight switchbacks. Stu Pierce, GMC senior marketing manager, misinterpreted some directions on our towing test loop and now wants me to change directions on this rural two-lane road.

Doing so means making a wide arc over some muddy ground on the left of the road, and hoping I can get the truck and the trailer through more muck on the opposite side. Four-wheel drive activated, Pierce guiding from outside, I pull forward through the turf and cross my fingers we don’t get the whole rig stuck.

The truck slips sideways as all four tires spin, kicking up red clay-like dirt in every directions. Then they hook up, dig into the mud, and without much fuss at all, truck and trailer emerge unscathed, now facing back toward the small town of Paradox, Colorado, instead of up that hill. It’s a good, if unintended, taste of some of the capability available from the 2017 GMC Sierra 2500 HD.

Redesigned for 2017, the heavy-duty truck is tougher than ever. The big change is the new Duramax 6.6-liter turbodiesel V8 engine underhood. Codenamed L5P, about 90 percent of its parts are new compared to the outgoing LML diesel engine. Outputs rise from 397 horsepower to 445 hp, and from 765 pound-feet to a massive 910 lb-ft of torque. Those numbers are right on top of the latest Ford F-Series Super Duty’s diesel engine; that 6.7-liter V8 makes 440 hp and 925 lb-ft.

Despite that gain in power, GMC engineers say the new engine has 35 percent fewer harmful emissions, specifically mentioning NOx. But heavy-duty trucks aren’t required to report EPA mileage numbers, so it’s not yet possible to say whether it is also more fuel efficient.

The engine breathes through a new scoop that sucks in cooler air from the front of the hood as well as from the traditional wheel well-mounted intake; that helps ensure the truck will have as much cool air as possible when towing on how days.

The diesel engine now uses General Motors-developed computers and software, instead of the Bosch controllers from the old one, which allows better integration of the powertrain with the rest of the truck. For instance, there’s better exhaust braking performance from the new variable-vane turbocharger, as well as software that helps keep the truck from speeding up on a downhill when using the cruise control.

The Allison six-speed automatic and the truck’s driveline components have all been commensurately upgraded, too, to tolerate the higher power output. And the diesel exhaust fluid tank is now larger so drivers can go longer before topping up the emissions-reducing elixir.

All of those enhancements translate into an effortlessly powerful experience out on the road. The big V8 builds massive amounts of grunt with just a touch of the accelerator. That 910 lb-ft torque peak arrives as early as 1,650 rpm, so there’s barely any waiting before the big truck pulls hard. Unlike HD trucks of yore, the six-speed automatic is is generally as slick as one in a smaller truck. It’s only under load, like when towing briskly up a hill, that it shifts abruptly.

In its own testing, GMC says the 2017 truck is 0.7-seconds quicker to 60 miles per hour, unladen, than the 2016 model, and that a 2500 HD Crew Cab towing 10,000 pounds will accelerate from 50 to 70 mph in 1.5 fewer seconds than the predecessor. What that means in the real world is that, unsurprisingly, whether it’s got an empty bed, two snowmobiles back there, or that aforementioned trailer, the Sierra 2500 HD Denali can still get out of its own way without issue.

Engineers took steps to reduce engine noise, specifically at idle, including new covers for the valvetrain and a multilayer oil pan. GMC says that cabin noise at idle has been reduced from 86.7 to 84.8 decibels. Subjectively, almost none of the traditional diesel clatter and grumble makes itself audible in the cabin at idle. And it’s only when you call up lots of power that the engine starts to get noisy. Wind and road noise, too, aren’t as pervasive as in some heavy-duty trucks. Credit the extra attention to refinement and NVH-quenching that goes into the GMC Denali.

As in any heavy-duty truck, there’s a lot of vagueness to the steering on-center. GMC’s power steering can automatically help compensate for road crowns and reduces its assist level at speed or when towing, but there’s still a little more correction needed to stay within the lanes than in a Sierra 1500. The truck’s suspension, despite being designed to cater to so much mass hanging off the back, does an admirable job of filtering out big road impacts on the move. And that’s even with the 20-inch chrome wheels fitted to the 2500 HD Denali.

The Denali trucks we’re driving are, of course, the pinnacle of GMC’s truck luxury. With abundant chrome decorating the outside and reams of nice features inside, the HD Denali is a lovely place to spend time. Available tech toys make life easy: Cooled front seats, lane-keep assist, pre-collision warning, a 4G LTE wi-fi hotspot, acres of leather and chrome, and so on. Perhaps my favorite feature of all are new trailering cameras that are available as an accessory. Small cameras fitted to the side-view mirrors, and optional to various points on the back of the truck, permit an incredible vantage point of your trailer while towing. Activate the turn signals, and the infotainment screen shows the view from the side so you can check whether you’re about to hop a curb (or crush a pedestrian) with your trailer; hold the screen’s back button and there’s a menu allowing you to look at any of the cameras while moving, even at highway speeds. You can even place a camera inside your trailer to monitor a horse or livestock.

The goal is for the GMC to be a truck you want to drive, not simply one that you have to drive. The brand’s representatives assert that GMC will always have an extra cachet for buyers simply because it’s a noticeable step up in premium-ness.

The 2500 and 3500 HD trucks are for people who haul regularly; if you don’t need this much capability, a Sierra 1500 Denali would be a better choice.

“The guy buying the Denali is also looking for a much higher level of refinement, of exterior styling … interior comfort and quietness, and ride quality,” argues Pierce. “If they’re gonna spend a lot of time pulling these trailers, they’ve earned the right to buy a truck that’s gonna make that job a lot easier.”

Still, the 2500 and 3500 HD trucks are for people who haul regularly; if you don’t need this much capability, a Sierra 1500 Denali would be a better choice. Even so, GMC says to not be swayed by the herculean tow ratings available on its spec charts. Eighty-six percent of GMC HD customers buy trucks with tow ratings below 25,000 pounds. But that still lets people tow campers, horse trailers, off-roading toys, and so on with ease.

Ultimately, if you’re just looking for a tough truck, a Chevy Silverado 2500 HD – which shares essentially all its mechanical bits with the Sierra 2500 HD – might be just as good a tool for towing and hauling big loads. But what GMC, and specifically the Denali models, provides are trucks that provide a lot of luxury while accomplishing any task you need.

And if that task involves turning around a 26-foot trailer in muddy grass, well, it will be easier than you expect. 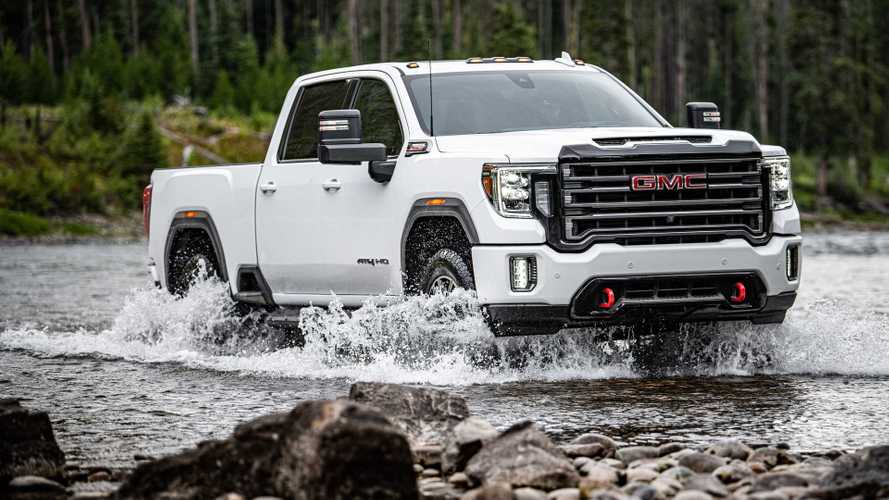