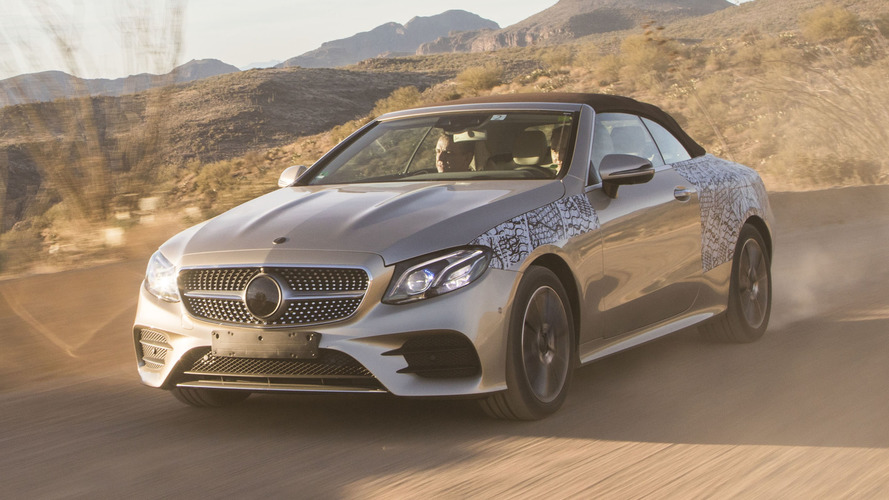 Mercedes’ midsize ragtop is shaping up to be just right.

Okay, so we’re not sure what’s gotten into Mercedes-Benz this year, but it has developed a crazy thing for going topless. Currently, the company offers no fewer than five droptop models: C-Class, E-Class, and S-Class cabriolets, as well as SLC-Class (neé SLK-Class) and SL-Class roadsters. With a ragtop version of the intense, exotic AMG GT sports car set to join the family by the end of the year, Mercedes-Benz will have more convertibles than Cadillac has models. And that’s not counting the AMG versions.

Not that we’re complaining. Mercedes has been making convertibles for as long as the car itself has been around. After all, when Karl Benz invented the automobile in 1883, it didn’t have a roof, and the company’s most recent cabriolets – the C-Class and S-Class – are not only arguably as beautiful as their hardtop counterparts, but achieve near or actual parity in terms of comfort, security, performance, and even winter-friendliness. This year, the midsize E-Class cabriolet follows their lead. The all-new 2018 model, based on the winsome new W213-generation E-Class, will be shown for the first time at the Geneva Motor Show in early March, but Mercedes-Benz invited us to Arizona to spend a day in the shotgun seat so that we could get a sneak peak. Would it be the “just-right” Goldilocks of Mercedes-Benz convertibles, or the lineup’s unremarkable Jan Brady-esque middle-child?

From the shoulder level down, the E coupe and convertible models share pretty much everything you can see: sheetmetal, fascias, grilles, head- and taillamps.

Technically speaking, the droptop E-Class offers few surprises, especially if you read about the 2018 E-Class coupe that recently debuted at the 2017 Detroit Auto Show. From the shoulder level down, the E coupe and convertible models share pretty much everything you can see: sheetmetal, fascias, grilles, head- and taillamps, rendered in standard and sport themes. Like the E-Class coupe, the cabrio dons what Mercedes characterizes as a “reduced design idiom” manifest in its slippery smooth body sides that lack the shoulder-line crease that has been a hallmark of Mercedes’ recent passenger cars. Twin power bulges in the hood compensate somewhat, but frankly, we kind of miss the sexy coke-bottle contours imparted by the shoulder crease. Even with camouflage tape covering the decklid and rear fenders, we could see that the rear quarters lack the elegant tapering appearance of its brethren. The taillamps, too, appeared plainer than those in the C- and S-Class cabriolets, at least until we got close enough to notice glitzy red “Stardust” elements within their lenses that look like glowing red sand. We’ll reserve judgment until March, but this time around, it appears that the C- and S-Class cabrios may have the edge in style.

From the windowsills up, the cabriolet and coupe go their own way. Instead of trying to mimic the coupe’s vast expanse of side glass and super-thin C-pillar treatment, the E-Class cabriolet’s smooth arcing roof is conventionally shaped, fashioned after that of the S-Class cabriolet, supported by multiple structural ribs and containing more insulating layers than a lasagna. The top’s fabric outer layer will be available in black, brown, dark red, or blue, making some striking color combinations possible. And lacking as it does the coupe’s controversial sliver of fixed rear quarter glass, the cabrio presents a lovely pillarless side opening with all four side windows lowered while the roof is still in place. There are even overhead lights embedded into the fabric.

Other than some unique wood treatments, the interior is more or less identical to the coupe, cool jet-like air vents and all.

When time comes to lower the roof, as we did several times during our ride-along, the process requires only one finger and, according to Mercedes, less than 20 seconds – same goes for raising it, too. If these prototypes are any indication, however, those times are conservative; according to my stopwatch, the elapsed time between tugging the roof latch and hearing the audible chime indicating the roof is secured was just 17 seconds, with the reverse process requiring only 14 seconds (not counting the lowering/raising of the side windows). A nifty graphic in the gauge cluster depicts which part of the process is occurring, should you not care to look up. And of course, all of this happens in utter silence.

The only time we were allowed to ride with the top down was within the confines of new corporate friend Nissan’s proving grounds, where much of the E cab’s final verification took place. Apparently, Mercedes didn’t want amateur spy photographers to see that, other than some unique wood treatments, the interior is more or less identical to the coupe, cool jet-like air vents and all. Or maybe they didn’t want onlookers to see that the “Aircap” wind deflector system, with screens that rise from the windshield header and behind the rear seats, will return on the new E-Class cabriolet after debuting on the last one. Maybe they didn’t want them to witness how nearly every hair on our heads stayed put when sitting in the passenger seat with the top down. Maybe they didn’t want them to see how decidedly not miserable we were in the adult-friendly (really) rear seats, with their wonderfully contoured cushions (though the seatback is rather upright).

What outsiders couldn’t have been able to discern, regardless of top status, is how solid the E cab prototypes were. The basic suspension and steering setups are shared with the coupe, with structural compromises endemic to convertibles addressed with “X” bracing under the engine bay, and “V” bracing under the rear end. Stronger door sills, reinforced cross-members beneath the rear seats, and a reinforced rear cowl further serve stiffen the E-Class cabriolet whilst leaving a trunk pass-through, just like the C-class cabrio.

When the E-Class arrives here later this year as a 2018 model, it will come only as an E400 model, powered by a biturbocharged 3.0-liter V6 that churns out 329 horsepower and 354 pound-feet of torque. This same engine was found under the hoods of the previous E400 coupe and convertible models, but for 2018, the W213’s automatic transmission adds two forward gears for a total of nine. As with the coupe, both rear-wheel and 4Matic all-wheel drivetrains will be offered, as is the case with the C- and S-Class cabrios. With total weight up about 330 pounds from the E400 coupe, according to Mercedes, we expect the RWD E400 cabrio to accelerate to 60 miles per hour in about 5.5 seconds, with another quarter-second or so more for 4Matic models.

Mercedes plans to have the E400 coupes in dealerships this summer, and the convertible certainly won’t arrive too much later lest it miss the season during which convertible sales are strongest. Sources tell us not to expect prices to change from the approximately $62K base price of the outgoing model. Watch this space for official images and additional product information as they are made available. 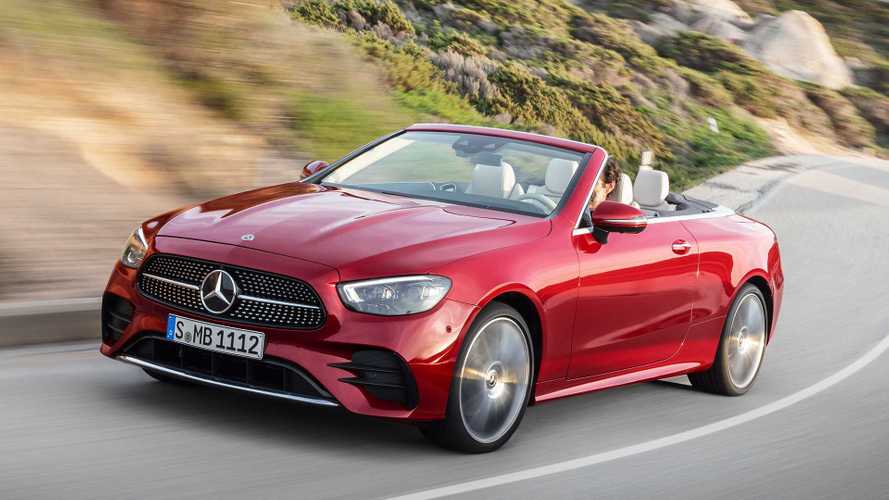