Records on the Nurburgring Nordschleife fall quickly. It was only a couple of months ago that the latest Porsche Panamera Turbo set the record for a production sedan at 7 minutes 38 seconds. But that time has been blown into the weeds by the Alfa Romeo Giulia Quadrifoglio, with a time of 7 mins 32 secs.

Actually, it’s more a case of the Giulia reclaiming its record. A manual gearbox-equipped example set a marker of 7 mins 39 secs, only to be usurped by the four-door Porsche. This time around, Alfa used a car fitted with the optional, eight-speed ZF automatic transmission, wiping a massive seven seconds off the manual car’s time. In Race mode, the auto ‘box shifts gears in just 150 milliseconds, orders of magnitude quicker than even the best drivers can change gear manually.

See how the Giulia Quadrifoglio stands up to the Mercedes C63:

Alfa Romeo test driver Fabio France was at the wheel for the lap. As you can see from the on-board footage, the Quadrifoglio displays a nicely neutral handling balance, but swings into oversteer over big mid-corner bumps and in quick switchbacks. Overall it looks pretty benign, so even modestly talented drivers should be able to push it hard.

The Quadrifoglio is powered by a 2.9-liter, twin-turbo V6 engine ‘inspired by’ Ferrari’s twin-turbo V8 motor. It serves up 510 horsepower (380 kilowatts) and 443 pound-feet of torque (600 Newton meters), channeled to the rear wheels. The 0 to 60 miles-per-hour sprint is dispatched in 3.7 seconds (0 to 100 kilometers-per-hour in 3.9 secs) and the top speed is a whopping 191 mph (307 km/h). None of those lily-livered speed limiters German cars are saddled with here. Incidentally, on the Nurburgring lap it reached a vmax of 176 mph (284 km/h) on the long Dottinger Hohe straight.

Whether or not this record is enough to persuade buyers away from the BMW M3 and Mercedes-AMG C63 into the Giulia Quadrifoglio remains to be seen. It went on sale in Europe a couple of months ago, and is expected to reach the United States towards the end of the year. 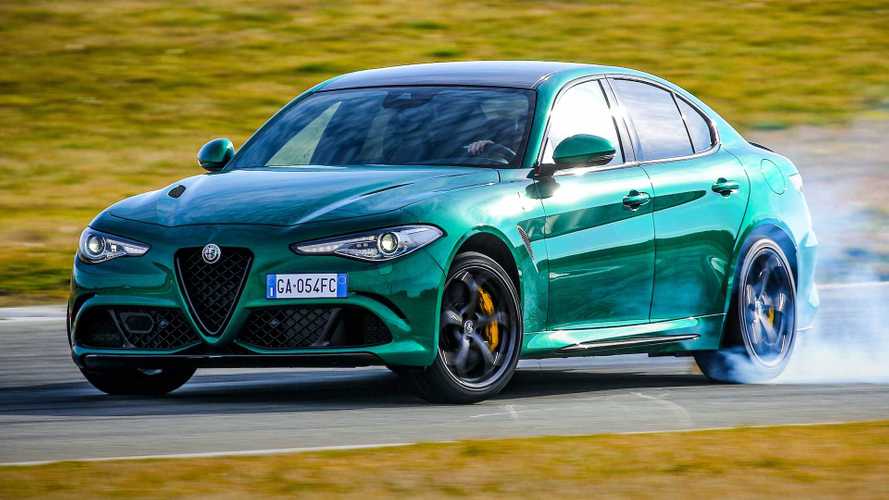 Alfa Romeo Racing at the Goodwood Festival of Speed