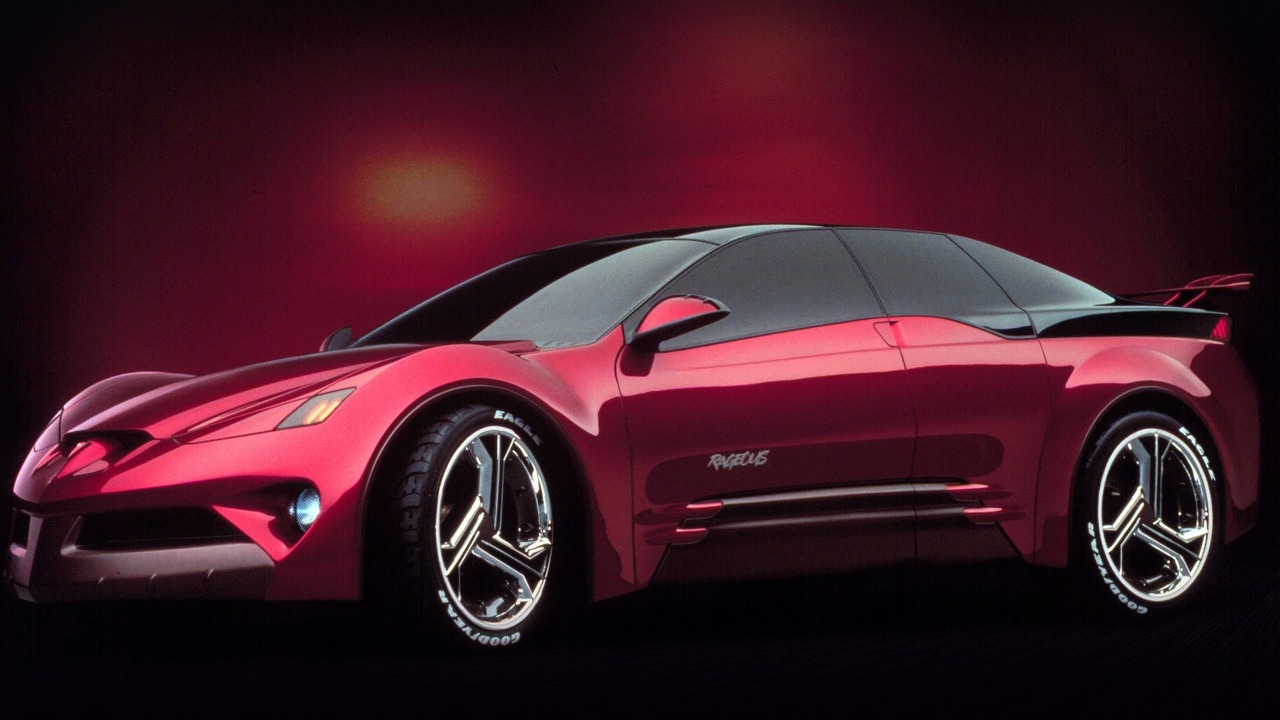 Because there was nothing quite like it back then and there isn’t one today. In addition, it’s a weird-looking thing, a V8-powered hatchback with suicide doors and a drop-down tailgate on top of which is sitting a rather tacky fixed rear wing. Even though overall it looks quite funky (and not necessarily in a good way), Pontiac should have made this instead of the dreadful Aztek that arrived a couple of years later.

Getting back to the Rageous, Pontiac called it a ‘fiery red sports machine’ and envisioned the performance hatch with practicality in mind by giving it a foldable front passenger seat. The aforementioned drop-down tailgate provided access to a massive 49 cubic feet (1,387 liters) cargo area featuring a washable dirt-resistant rubberized material on the floor to make cleaning a breeze.

It also had no less than ten net pockets and several U-shaped tie-down hooks to secure the items being transported. All these goodies opened up ‘a whole new world of functionality for a high performance sports car,’ according to interior designer Tim Greig. Speaking of the cabin, the dashboard layout and finish is too fast and too furious for our tastes, but kids back in the day probably liked it.

Although it looked a tad childish, the cabin did have a few aces up its sleeve, such as the head-up display along with a track ball mouse in the steering wheel to control many of the car’s functions. Those four bucket seats weren’t too bad, either.

Although peculiar, the Rageous is in many ways interesting as it tried to be the jack of all trades by offering a high level of practicality and some serious performances. The 5.7-liter engine pushed out 315 horsepower (235 kilowatts) and 335 pound-feet (454 Newton-meters) of torque sent to the rear wheels through a five-speed manual transmission. The hardware was punchy enough to enable a 0-60 mph (0-96 kph) run in only five and a half seconds.

For obvious reasons, the Pontiac Rageous did not make it to the assembly line. Even if it did, the model wouldn’t have been enough to save the brand from extinction which occurred in January 2010 when the last car was built.

Here’s a quick reminder of our three most recent concepts from the series: Ferrari Rossa, Lincoln by Vignale, and Holden Torana GTR-X.

Check out the press release to read the original document sent to the media back in 1997.

PONTIAC RAGEOUS INTERIOR DESIGNED FOR ACTIVE LIFESTYLES
DETROIT
No matter how you open up the Pontiac Rageous concept vehicle, there is a whole different world in there.

The outside is a fiery red sports machine, bulging with muscle and bold Pontiac excitement. But the inside is spacious, functional and offers driver and passengers easy entry and exit while providing the driver with great visibility.

An aggressive rear decklid spoiler gives no hint that underneath is a rear hatch and a drop-down tailgate that opens to 49 cubic feet of cargo space. The front passenger seat and two rear seats fold down flat to make room for all kinds of sports equipment, home improvement supplies or whatever. The rear cargo space of the Rageous can accommodate something as large as 4 x 8 sheets of drywall or plywood. A washable dirt-resistant rubberized material in the rear cargo area makes clean-up a snap.

To secure the load, the Rageous provides U-shaped tie-down hooks that pull out of the floor and sides. To help organize smaller items, the Rageous has a number of multifunctional built-in storage containers and 10 net pockets.

"Anywhere we could put storage areas, we did," said Interior Designer Tim Greig. "The Rageous opens up a whole new world of functionality for a high performance sports car."

The Rageous is outfitted with four bucket seats, each equipped with a racers style four-point harness restraint. Occupants are further protected in frontal or side collisions by front and side airbags. Front seats feature 6-way adjustments including power height. Rear bucket seats have an adjustment for back angle. All four seat headrests have built-in sound system speakers.

Its obvious that the Rageous is designed for active lifestyles. In today?s busy, time-constrained society, active people want to optimize their play time. A special communication link package in the Rageous permits the active person to stay in touch with the office via personal computer links and cellular phones while driving to the mountains for some mountain biking or skiing.

Monitoring and control of these and other system can be maintained without ever taking your eyes off the road thanks to the Head Up Display (HUD). A track ball mouse in the steering wheel controls electrical and electronic systems such as the sound system, cell phone, heating and cooling, seats, and lights through the HUD. Additionally, driver information such as speed, odometer and engine conditions can be displayed on the HUD.

A shrink-wrapped interior emphasizes the contours of the body and door structures and contributes to a cylindrical design motif. These cylindrical forms are evident in the center console and in the gauges and air outlets that are molded into the instrument panel.

Controls are clustered around the driver in a cockpit designed to deliver information quickly and easily to the driver. Round, pod-like gauges feature readouts in both digital and analog formats while supporting the cylindrical design theme.

The ribbed theme that portrays ruggedness and protection is carried into the interior on the shifter and on front and rear seat assist grips on the doors.