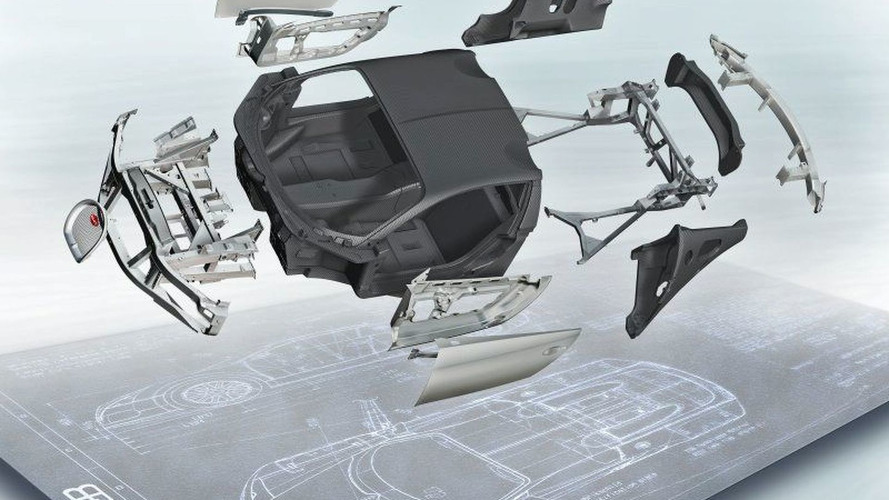 A Safe Bet for a World Record

The highest possible level of safety for the driver and passenger in all driving situations is one of the prime objectives of the development of the exceptional Bugatti Veyron 16.4 sports car. For this reason, the Bugatti development team has created the ideal combination of structural rigidity and lightweight construction for the fastest production car in the world.

The passenger cell of the Bugatti Veyron 16.4 is comparable to the cockpit of a racing car and is designed in a monocoque construction as a survival cell for two persons. It consists of extremely sturdy yet feather­light carbon fibre. This central vehicle structure is perfected by a highly complex frame structure attached at the front and rear. Bugatti development chief, Dr. Wolfgang Schreiber on the advantages of this ~~ structure: “The torsional rigidity from axle to axle is around 60,000 newton metres per degree, a value which is twice as high as that which is customary in modern series-built sports cars. This outstanding structural rigidity produces extraordinarily precise driving performance in bends and very good stability when braking and accelerating”.

The development goals of the world’s most fascinating sports car have been achieved. New standards have been set in the disciplines of torsional rigidity, passenger protection and lightweight construction. The Bugatti development team differentiates between four fundamental structural modules with defined, highly complex requirements profiles.

The centre of the frame structure is formed by the carbon fibre passenger cell, which is built in exactly the same way as the survival cage of a Formula 1 racer as a monocoque construction weighing roughly 110 kilos. The rear section of the monocoque is designed with a hollow space to hold the 98-litre saddle fuel tank which surrounds the transmission and which is separated from the passenger area. The tank area forms part of the monocoque.

The front section of the Bugatti Veyron 16.4 is firmly attached to the monocoque front and consists of an aluminium frame structure weighing only 34 kilos, which performs two essential tasks: it holds the front section vehicle components, which include the front axle differential, radiator package, steering system and battery, and it absorbs the wheel force. In addition to this, the front section of the car is designed as a crash structure which deforms in a defined manner in the event of an accident, thereby absorbing kinetic energy.

Mounted to the rear section of the monocoque are so-called “bags”, which serve as top longitudinal supports and which also accommodate the MacPherson struts of the rear axle. These longitudinal supports are also made of carbon fibre to make them torsionally rigid and lightweight. A carbon fibre crossbeam screwed onto the two longitudinal supports forms the rear edge of the frame structure. The steel frame mounted beneath it as a structural element accommodates the 16-cylinder engine. Because of the considerable heat given off by the engine and, in particular, the turbocharger, which operates with exhaust gas with a temperature of up to 1.000 °C, this frame structure is made of rust -free, heat-resistant stainless steel.

The rear periphery of the frame structure consists of aluminium components designed to form a so-called crash box. They deform in a precisely calculated manner in the event of a rear collision in order to absorb as much impact energy as possible.

The doors of the Bugatti Veyron 16.4 consist of an aluminium structure with aluminium planking on ~~ the outside, which has an integrated impact absorption system, which helps prevent another vehicle from penetrating into the interior in the event of a side-on crash. Its special position makes it possible to deflect impact energy via front link points and so-called crash claws in the area behind the door locks. In this way, the doors also perform bracing functions as part of the entire vehicle safety structure.

Doors of this dimension pose a special challenge to production technology, because they must also satisfy Bugatti's high quality standards. Albert Finkbeiner, the engineer responsible for structural

development, comments on this as follows: “Producing first-class geometry and immaculate surface quality on a component of such large size is unique”. To do so, process engineers make use of an innovative liquid remodelling process, which specialists refer to as the “fluid cell compression method”. An aluminium sheet is laid over the shaping tool and a hydraulic cushion lowered from above shapes the sheet under high pressure in several directions. In spite of the extensive shaping process, a component is produced in which, despite its size, the aluminium sheeting is of equal thickness throughout and not thinned out at any point, thus producing the highest possible degree of rigidity.

The complex construction requirements for the Bugatti Veyron 16.4 reflect the high standards of the Bugatti name, where technical innovation has always gone hand in hand with the highest possible level of passenger protection and product exclusivity. This principle underlines the uniqueness of this ambitious project.