It’s finally happened. Tesla has unveiled its long-awaited affordable electric car, the Model 3, at its design center in Hawthorne, California this evening. The car is the fourth model from the upstart electric car company, following the original low-volume, high-price Roadster; the higher-volume Model S uber sedan; and equally high-volume but more functional Model X crossover. The Model 3 will go on sale late next year with a starting price of $35,000, and company co-founder and CEO Elon Musk announced during the car’s unveiling that 115,000 pre-orders had already been made in the past 24 hours at $1,000 a pop.

The Model 3 looks like a mini version of the Model S with the grille-less front end of a Model X. It’s interior, however, does both the Model S and X one better with an infotainment screen that is the largest we’ve ever seen in a vehicle. Check out the pictures in the gallery below; it extends from the dashboard on an arm and looks like a 4K monitor from a graphic designer’s workstation. 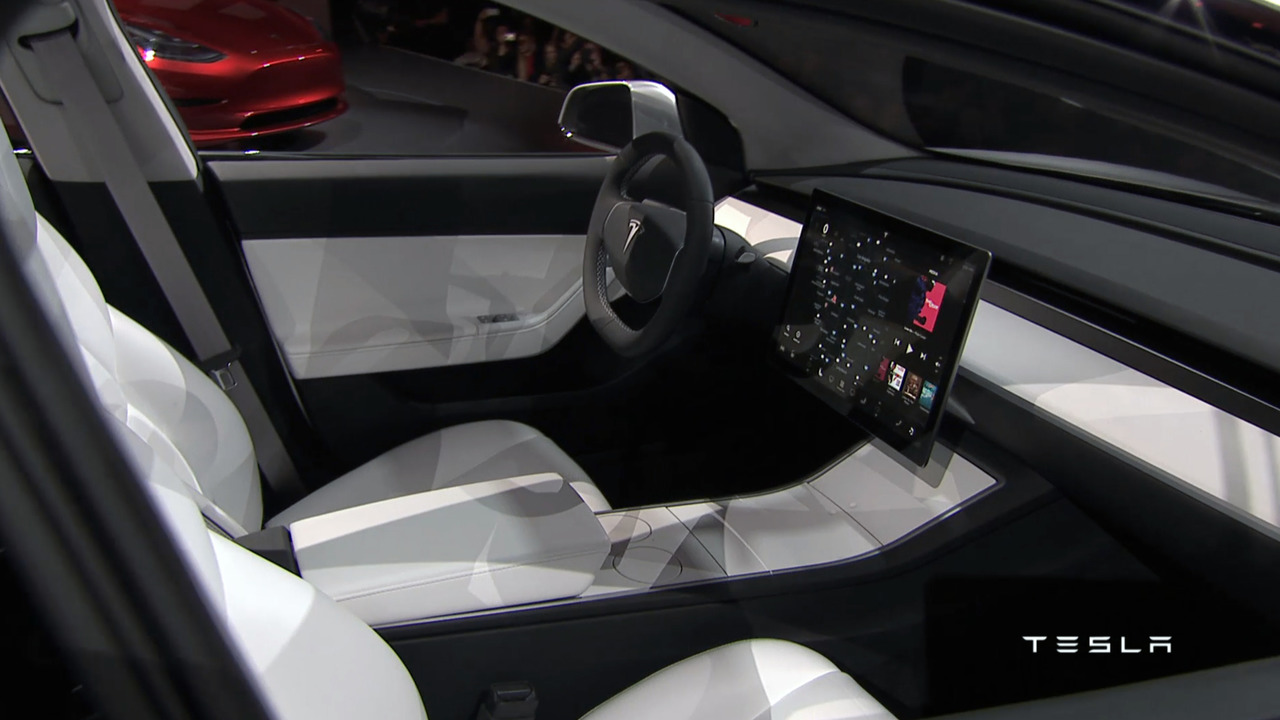 Musk announced on stage that the Model 3 will earn 5 stars in every category of the National Highway Traffic Safety Administration’s battery of tests, and that each Model 3, regardless of trim level, will come standard with the company’s Autopilot hardware and safety features.

As for performance, the slowest versions of the Model 3 will be able to reach 60 miles per hour in less than six seconds, though there’ll be significantly quicker versions available. It will also have an EPA-certified range of at least 215 miles. That should give the Model 3 just enough mileage to out-distance its closest competitor, the upcoming Chevy Bolt, with its range of only just over 200 miles.

Musk also remarked that the Model 3 will be more spacious and comfortable inside than similarly sized combustion cars. That’s because, with the batteries under the floor, there was room for Tesla engineers to move the front seats forward and compress the instrument panel, giving rear seat riders more space. The claim was given that the Model 3 will seat five adults comfortably, with an emphasis on comfort, and that a 7-foot-long surfboard will fit inside.

As for the company itself, Musk gave an update on the size and growth of its Supercharger network that will support the Model 3. All versions of the car with come with Supercharging capability standard, and the size of the Supercharger network around the globe where you can charge your Model 3 in no time will double to 7,200 stations by the end of 2017, and the number of destination chargers will triple to 15,000.

Model 3 owners should also be much better able to find sales and service support for their car than Tesla owners in years past, with the number of support facilities expected to more than double, from 215 today to 441 locations, by the end of next year.

Musk tweeted earlier today that tonight’s unveiling was only “Part 1” of the Model 3’s debut. We don’t know what’s coming in Part 2 or when it will happen, but tonight’s event gave the automotive world plenty of Tesla news to discuss in the meantime.