The heavy duty Ford truck will borrow styling cues from the F-150.

Ford isn't being shy these days with its test fleet of new Super Duty trucks. We recently caught a SuperCab model on the street that appeared to be an XLT trim level. Now we have something a tad larger in the F-Series Super Duty family, and more luxurious to boot.

Admittedly, it's hard to hide a 22-foot-long truck. If anything, such a vehicle stands out even more when wrapped in camouflage. Curiously, it seems Ford isn't interested in hiding the areas where a majority of changes are taking place. The grille is in full view here, save for the large Ford oval mounted in the center. Looking closely, we see the grille design is different from the XLT we saw previously, though the lights are still bracketed with large C-shaped running lamps. Black paint peeling off the grille surround shows it's actually chrome underneath.

As such, we think this is a King Ranch model – not top-of-the-line but certainly luxurious in its own right. The wheels also have visible black paint peeling off, revealing more chrome. The long-box configuration with the bigger cab and dual rear wheels make this an F-350 model, a rig that currently costs $70,000 before any optional extras. Our sources tell us the King Ranch and Platinum trim levels will share the same front clip, with paint combinations denoting which is which. We see updated LED taillights at the back, but beyond that, exterior upgrades versus the current Super Duty should be minimal.

A bigger change is expected inside. Following suit with the F-150, we're hearing a large center touchscreen will hold station in a redesigned dash that still incorporates plenty of tactile controls. The screen could be 12 inches in size, and a new digital driver display could be part of the upscale King Ranch package. Expect plenty of technology as well, though we haven't heard anything definitive thus far regarding Ford's BlueCruise hands-free system. 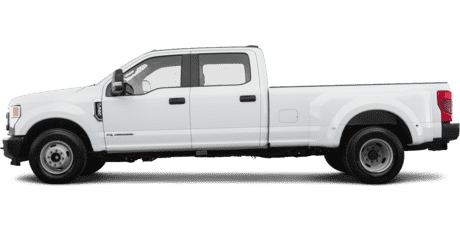 Under the skin, Ford should carry over the bones and powertrain options from the current truck. That means familiar gasoline or diesel power, doled out through a 10-speed automatic transmission. The 6.7-liter turbo diesel V8 could get a bump in power to keep it competitive with big trucks from Chevrolet and Ram.

A debut is expected to happen in the fall. Depending on how quickly Ford moves to production, that means it could be a 2023 model though it should definitely be in effect for the 2024 model year.