Meet The Fabulous Flamingo, An RV Made From An Abandoned Aircraft

Even though we've seen our fair share of quirky RVs over the years, every now and then, an oddball such as this arrives and reconfirms there are virtually no limits to one's imagination. With free time and money to spare, along with a lot of imagination and determination, great things can be achieved, such as merging an aircraft with a delivery truck to create a behemoth in the world of recreational vehicles.

The unusual hybrid consists of a fuselage taken from a Douglas R4D military transport aircraft mated to the chassis of an International DuraStar 4400. The unusual combination represents the work of US Air Force retiree Gino Lucci from Nashville, Michigan who had been dreaming about such a contraption since he was just eight years old. Several decades later, he got to work and transformed his dream into reality.

The adventure kicked off when one of his sons found the fuselage of the aircraft in Rolla, Missouri where it had been abandoned for many years. Originally flown by the Navy in South America, it was last used by the Federal Aviation Administration (FAA) as a test plane over 30 years ago before a tornado abruptly put it out of commission. Consequently, the aircraft's condition was less than ideal.

They bought it right away despite its rough shape, and together with his sons, Gino fused the plane with a chassis of a truck he owned in a process he describes as being "hillbilly scientific." The truck was pulled next to the Douglas R4D resting on a flatbed trailer and Gino with his sons started taking measurements before chopping off the fuselage. After repeatedly placing the airframe onto the chassis to see what else needs to be cut, they eventually got it right. 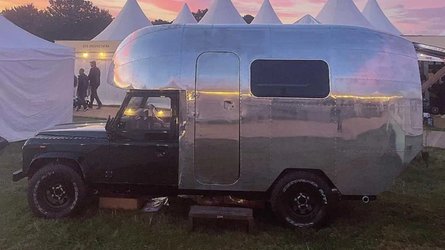 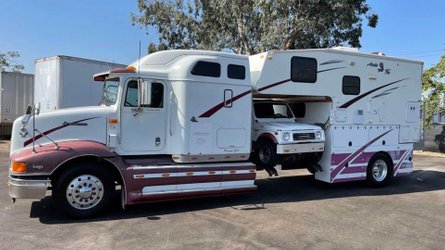 Custom RV Is Part Camper, Part Semi Truck, And It's For Sale

The unconventional RV stands 12 feet and 6 inches (3.81 meters) tall and is a whopping 38 feet (11.6 meters) long, so you can imagine it’s quite a challenge to drive it on the road. Motivation is provided by the truck's original Navistar DT466 7.6-liter unit, which was available with power ratings from 210 to 300 horsepower (160 to 220 kilowatts).

The engine has its work cut out for it taking into consideration it has to move no fewer than 17,000 pounds (7,771 kilograms). The highly unusual recreational vehicle can get up to speeds of 85 mph (137 km/h), but we bet fuel economy is in the single digits.

All in, the project cost $20,000 and the aircraft's engine cowlings were repurposed as the RV's front fenders while the rear ones are actually tip tanks from an aircraft. Interestingly, the man behind the wild project says that if the RV were half an inch wider, it would render it illegal to drive on the road. Those massive side mirrors come from a 1970s Ford pickup truck while the original emergency exists on both sides have been retained from the Douglas R4D.

The interior is very much an RV with the usual amenities, but the aviation theme has been kept by installing military switchgear as well as a working intercom despite being from the 1940s. Gino and his family needed about a year to make the RV roadworthy and two more to iron out all the kinks.