You’d think that with a name like “Sexcursion” this heavily modified Ford Excursion would have shag carpeting and a bed in the back. But nope. Instead, you’ll find a 60–inch curved Samsung TV – and two smaller ones embedded in the Ford’s split-open tailgate. But that’s just a few of the many upgrades Franklin Williams of Onslow County, North Carolina, has made to his SUV, which is the featured vehicle in a new Barcroft Cars YouTube video.

Williams bought the 2003 Excursion about 10 years ago to haul work equipment before it became a family vehicle. However, one day his son suggested that they should turn it into a show truck, and that’s what Williams did, starting five years ago with a modest lift and 20-inch tires. Today, the Excursion has a 19-inch lift, 42-inch tires, and 30-inch rims, which are secured with custom lug nuts sharpened to discourage thieves. 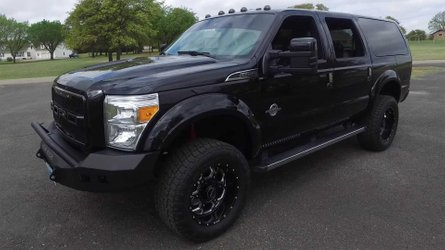 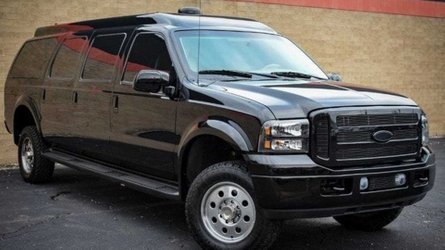 A lifted suspension and gold accents on a white exterior can certainly turn heads, but so do its scissor – “Lambo” – doors. They’re still the stock ones, but they have a modified hinge and lift assembly. It took Williams three days to get them to fit, but they open to reveal a completely redone interior, with alligator and ostrich leather used throughout. There are also more TVs – one in each door and the sun visors. It has an upgraded sound system, too.

The Ford is covered in custom parts, like the grille and bumper, the badging, and even the headlights, which have “Sexcursion” etched into their lenses. There’s also a custom TSO custom five-inch exhaust tip, which helps the 6.0-liter diesel under the hood breathe. Williams has gotten it up to 125 miles per hour (201 kilometers per hour), too.  Gold accents also found their way into the engine bay. Williams’ Sexcursion is almost 20 years old, but it looks has a bright future ahead as a stunning show truck. It has won over 100 awards.