General Motors has left it to tuners to figure out how to crank more power out of the Chevy Corvette C8. The car’s various cybersecurity systems make it difficult for tuners to tinker with the powertrain’s parameters, but, as we see again and again, it’s not impossible. FuelTech has a new video on its YouTube page showing its modified C8 producing a staggering amount of power at the wheels – 1,350 (1,006 kilowatts).

FuelTech calls the car’s output a “world record,” and that may well be the case for the race-only creation. By the company’s estimates, the engine is producing around 1,500 hp (1,118 kW) at the crank, if not more, and the extra oomph took a lot of modifying to achieve. The 6.2-liter LT2 V8 sports two Garrett G35-900 turbochargers, which certainly helps increase output, but FuelTech also added a second fuel delivery system. A new parallel-running ECU system keeps it all running smoothly while avoiding the C8’s locked-down control units.

However, according to the tuner’s video description, the world record output was achieved “largely due to a new transmission strategy.” FuelTech installed a second FT600 control system that controls the gearbox, though the company didn’t provide specifics, obviously. Many of the modifications are designed to circumvent or avoid the C8’s stock control units that place tight restrictions on what can and cannot be changed after the car leaves the factory.

To Tune, Or Not To Tune: 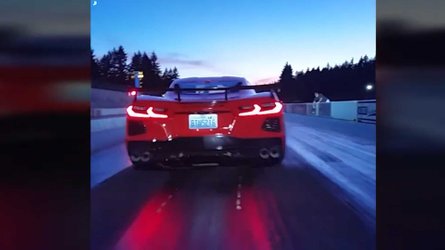 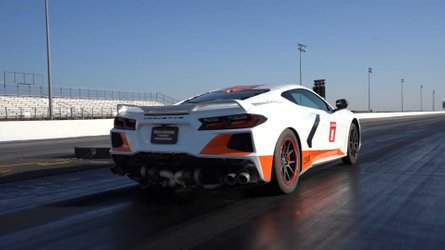 C8 Corvette Production started over a year ago, with Chevy is already readying the Z06 for its October reveal, and it’s still challenging to get more out of the car even as tuners make significant advancements. However, affordable consumer solutions are harder to find because of costs. Tinkering with engine, fuel, and transmission control systems isn’t for everyone, limiting the types of tunes and upgrades that are available. Thankfully, we only need to wait a few weeks to see the Z06 debut, and that could deliver as much as 617 hp (460 kW) from its 5.5-liter V8.