Ken Block's Collection Of Dream Cars Is Up For Sale

These cars are practically celebrities and they can be yours.

At the beginning of 2021, Ken Block and his Hoonigan Racing announced that the gymkhana guru and Ford have separated ways. The decade-long partnership has come to an end, which gave birth to several Hoonified Blue Oval machines that starred on Block's YouTube channel and several rally events worldwide.

There were many speculations as to where Block is taking his business after Ford, but one thing's for sure – three cars from the Ken Block Collection that he drove and drifted during that partnership are now up for sale for the first time, courtesy of LBI Limited. 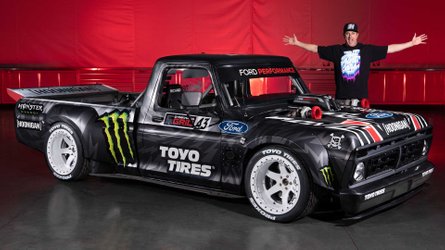 These cars, which have amassed a total of 200-million views on YouTube since 2010, include the GYM3, RX43, and a highly modified 1986 Ford RS200, affectionately known as Block's "Dream Car."

Here's your chance to become a Hoonigan yourself, but see first what you're buying.

This 2011 Ford Fiesta ST "GYM3" basically started it all. The widebody hatchback in iconic drip livery starred in Block's Gymkhana THREE film, which has garnered 66-million views on YouTube as of this writing. It's the first product from Block's partnership with Ford that was used for the Gymkhana Series Film production. Naturally, it's built to perform Block's crazy antics, so it was a widened body, seam-welded chassis, and a 600-hp Olsbergs engine.

Starring at Gymkhana SIX, EIGHT, and Terrakhana Films, the 2013 Ford Fiesta ST "RX43" is Block's weapon of choice in shredding tires for millions of YouTube views. The RX43's quite a traveler, too, reaching spectacular places from the rocky terrain of Utah to the royal streets of Dubai. It's also responsible for Block's first-ever Global Rallycross Win.

Ultimately, the RX43 also got the chance to face Formula 1 superstar Lewis Hamilton in a drag race.

Block's 1986 Ford RS200 is affectionately known to him as the "Dream Car." It's one of the 200 homologation versions of the rally racers originally built to compete in the legendary Group B era of the WRC.

Producing over 700 hp via a heavily-modified turbocharged engine, Block's RS200 is of course customized in terms of interior, paint, forged wheels, and numerous suspension modifications – all done by Hoonigan Racing.

LBI Limited (Instagram) is handling the sale of the Ken Block Collection. All cars below are located in the company's Michigan Showroom at 58 W Huron St, Pontiac, MI 48342.

Gallery: Ken Block's Collection of Dream Cars Up For Auction