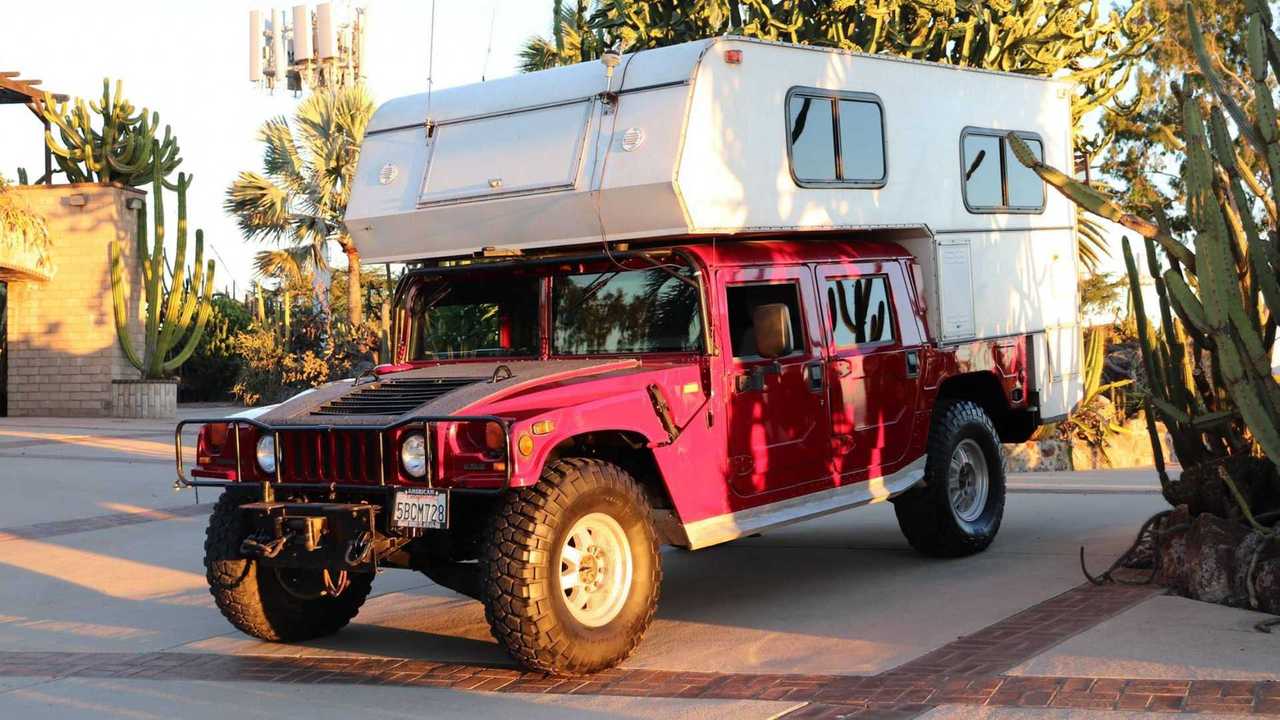 The stripped-down camper comes with an outdoor shower.

The GMC Hummer EV may tug on the nostalgia strings with its bold design and familiar name, though there’ll only ever be one true Hummer, the H1. Its boxy and brash military-derived design is an icon of the 1990s and early 2000s that’s still eye-catching today, and you can buy an extra special one that’s for sale on Cars and Bids.

The 2000 AM General Hummer H1 has a pickup truck bed housing a camper conversion, making the off-road brute a true go-anywhere machine. The slide-in camper, from Callen Campers, isn’t the most luxurious-looking option, but it is practical. A queen-sized bed and kitchenette – a two-burner gas cooktop and a sink – are included, along with a 35-gallon freshwater tank, an outdoor shower, and a 5-gallon propane tank. Other upgrades to the Hummer include a 20-gallon auxiliary saddle fuel tank, an aftermarket steering wheel, a Garmin GPS antenna, and a CB radio antenna.

Power comes from the 6.5-liter V8 turbodiesel that produces 195 horsepower (141 kilowatts) and 430 pound-feet (583 Newton-meters) of torque. Performance upgrades include an aftermarket exhaust and chipped engine computer. The Hummer embraces its adventurous side with its winch and central tire inflation system. Surprisingly, it still has the stock cassette stereo sound system; however, it’s not flawless as a 2003 accident left it with a salvaged title. There are some scratches and paint chips on the outside with other minor issues.

Nothing Comes Close To The Hummer H1:

This Mil-Spec Hummer H1 Is A Go-Anywhere Beast That Makes 1,000 LB-FT

However, that’s what happens when you use a Hummer H1 as an off-road remote desert camping machine, which is what the current owner has been doing with it. There are six days left to bid on the vehicle, with the current high bid sitting at $21,000. That’ll likely climb higher as the end of the auction nears. A Hummer H1 is rare enough, a Hummer H1 ready for a week in the wilderness is even more so.