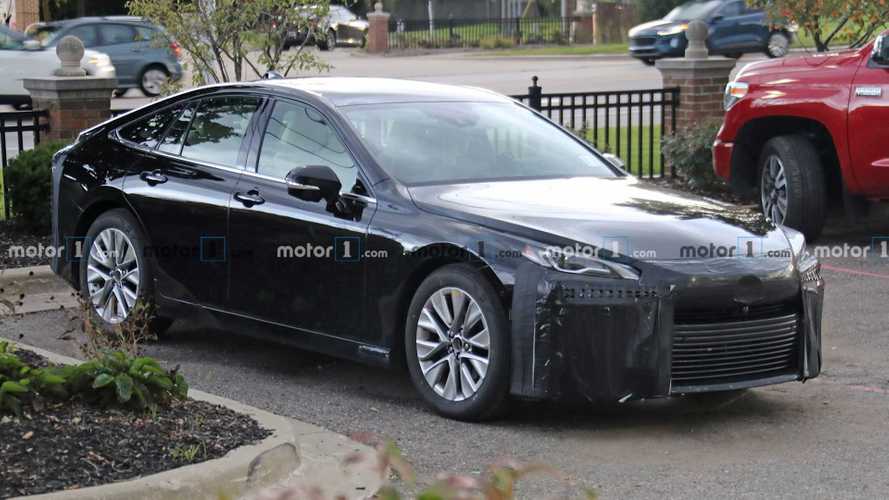 It looks like the concept Toyota introduced last year.

Just as the Pope adds a Toyota Mirai to his Popemobile collection, Toyota has to go and introduce a new one. We know the new model will debut this December, presenting a stunning redesign for the ho-hum looking model. Toyota previewed the new Mirai last year as a concept, though the latest batch of spy photos gives us our best look at the hydrogen-powered sedan. It looks identical to the concept.

The new styling changes accompany a new platform. The model will now ride on the automaker’s venerable TNGA platform while moving to a rear-wheel-drive layout. This will greatly increase the cabin and cargo space, helping solve one shortcoming of the current car. The Mirai in the new spy photos has lost some camouflage since the last time our photographers have spotted it. Only black cladding covers the front and rear fascias of the black car – and even then, it’s not completely covering the grille.

The test vehicle has the same sleek lights sitting at the corners of a fascia that houses a wide, gaping grille, just like we saw on the concept. The rear is much more covered, though the sloping roofline does end in a subtle trunk lip. Toyota has yet to reveal any details about the powertrain. However, Toyota has indicated it wants a 30-percent increase over the current model’s range of 312 miles (502 kilometers), which would give it 406 miles (653 km) on a tank of hydrogen.

What We Know About The New Mirai:

The new Mirai adds a heavy dose of style to the model, though that may not be enough to make it selling success. Hydrogen-powered vehicles continue to represent a small percentage of the market as more and more automakers begin putting an increased emphasis on fully electric vehicles. The next-gen Mirai has the looks; now it just needs the infrastructure to succeed.