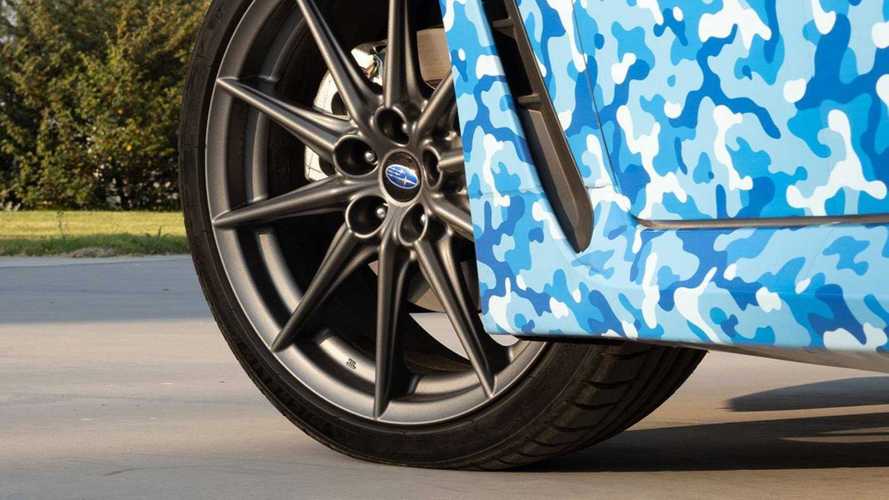 Once again, it will be twinned with the Toyota 86.

[UPDATE] A more revealing teaser image has emerged, and it's actually a real photo of the new BRZ. Attendees of the 2020 Subaru Tecnica International Subiefest World Record Attempt & Charity Drive at the OC Fair & Event Center Costa Mesa, CA were given a sneak preview of the sports car. Thankfully, someone took a photo of the camouflaged BRZ.

Subaru ended production of the first-generation BRZ, a cool little coupe known for its outsized handling prowess, at the end of July without going into any details about when its successor would arrive. Fast forward to October, a teaser image released on social media announces the world premiere of the “all-new” sports car will take place this fall. It could mean the rear-wheel-drive coupe will debut in November.

Once again twinned with the Toyota 86, the new BRZ was likely on the list of Los Angeles Auto Show debuts before the event was canceled due to the coronavirus pandemic. For the time being, we only have this single teaser image showing the wheel design and a bit of the camouflaged body. It appears the front brakes are cooled via the ventilated arches while those ten-spoke wheels are seemingly borrowed from the Toyota GR Yaris.

That is all Subaru is willing to reveal for the time being, without any info whatsoever regarding the technical specifications. There have been contradicting reports whether the BRZ and 86 will finally get turbocharging, but the latest intel suggests the dynamic duo will stick to a naturally aspirated powertrain. The cars are allegedly getting the Subaru FA24 2.4-liter flat-four engine with 217 horsepower (162 kilowatts) and 177 pound-feet (240 Newton-meters) of torque. That’s a bit more than the current 2.0-liter unit rated at 205 hp (152 kW) and 156 lb-ft (211 Nm) of torque (or 151 lb-ft with the automatic gearbox).

BRZ In The News:

It is believed customers will get to pick from a six-speed manual gearbox carried over from the current model or a newly developed automatic tailored to sports cars. A while back, Toyota said its new 86 would be better to drive than the Supra, which would mean the BRZ should also offer a more engaging experience behind the wheel.

Speaking of the 86, Toyota’s version was caught in traffic back in August with similar proportions combined with fully redesigned front and rear fascias. That camouflaged prototype looked like a refresh of the original bones rather than a completely new development, which would also apply to the BRZ. That being said, Subaru claims its next BRZ is “all-new,” so we’re getting mixed signals.

With a promised fall debut, we won't have to wait much longer to see the BRZ. Hopefully, the 86 is not far behind.