2021 Ford Bronco Spied Testing Strange Roof Option, What Is It? 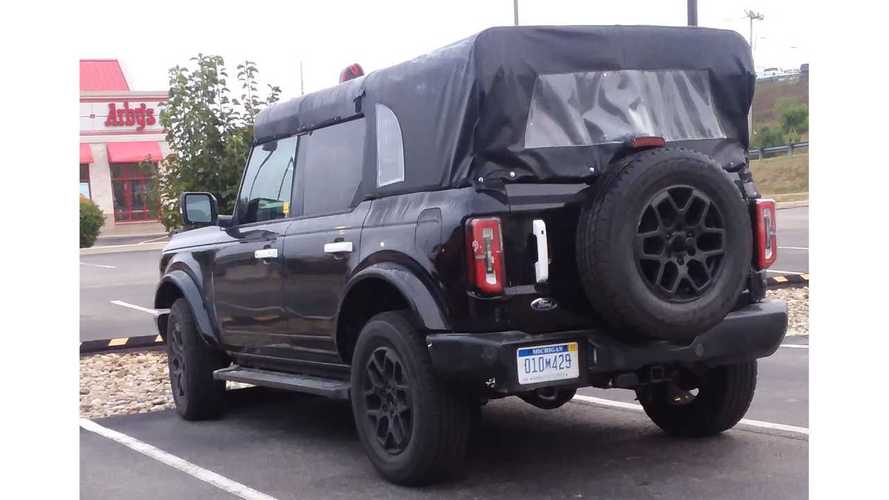 Could it be a power-retractable soft top?

The development phase doesn’t end when a vehicle receives its world premiere, especially if that vehicle is as customizable as the new Bronco. Case in point, a rather intriguing prototype of the four-door model was spotted by Karen Morrison in a parking lot wearing camouflage on its roof, extending all the way to the back. Carrying manufacturer plates, the big Bronco looked quite peculiar, but that’s only because it was hiding a roof-related secret.

It’s a known fact by now the fullsize Bronco was developed to offer an open-air experience by allowing the owner to get rid of the roof in an impressively quick and simple process. The four-door model comes with four removable roof sections (left and right panels, rear section, and the center panel) – all of which can be taken out by a single person.

The modular hardtop comes with rear quarter windows – which remain hidden on this prototype – that can be removed “in a fraction of the time it takes for competitors,” says Ford. The Blue Oval is happy to report you won’t have to take down the roof to get rid of the rear quarter glass. As standard, the four-door Bronco comes with a cloth soft top, and you can have both of them.

Ok, but this prototype must be hiding something Ford hasn’t revealed so far. While your guess is as good as ours regarding what that might be, our friends at Muscle Cars and Trucks point out the Bronco might’ve had a power-retractable soft top similar to what Jeep is offering with the Sky One-Touch Power. If it’s anything like the Wrangler’s, Bronco owners should be able to open the soft top only partially, at any desired position.

It’ll be interesting to see whether Ford has found a way to differentiate its electric roof-opening mechanism from the aforementioned Sky One-Touch Power. That is if we’re actually looking at a power-retractable soft top as it might have something to do with one of the 200+ factory-backed accessories the Bronco will be compatible with at launch.

The Bronco Is Finally Back: