The Blue Turd is back with more power, less weight, and a new world record.

Update: 1320video was with Zach during his quest for an eight-second pass. The above video added on March 20 captures his trials, tribulations, and ultimate success over the course of a very long weekend.

We aren’t going to lie – this old Ford Taurus SHO and its owner Zach Wright are working-class heroes to us. We first saw The Blue Turd (Wright's official name for the car) just over a year ago when it only produced 800 horsepower (597 kilowatts). We revisited him that summer when, with his stock SHO engine block upgraded to 1,000 hp (746 kW), he ran several nine-second passes to officially become the world’s fastest Taurus. Since then he made an appearance on the Netflix show Fastest Car, and with the engine now producing an estimated 1,100 hp (820 kW) to the wheels, he's going even faster.

That brings us to this article, focusing on what Wright accomplished this past weekend. He faced numerous mechanical challenges and a Coronavirus pandemic to run at Houston Raceway Park for TX2K20, and the result is an eight-second Ford Taurus that goes 170 mph in the quarter-mile. And yes, it still has a stock block, stock crankshaft, stock heads (with upgraded hardware), and Wright is still feverishly shifting a Taurus SHO five-speed manual transmission with a clutch and stick.

Specifically, the Blue Turd went 8.967 at 170.69 mph and yes, the hood decided to part company with the car towards the end of the run. However, there's a lot more to this story than just that, as the big run actually didn't happen during the event. In an exclusive interview with Motor1.com, Wright explained just how much effort went into this eight-second pass.

The Road So Far: 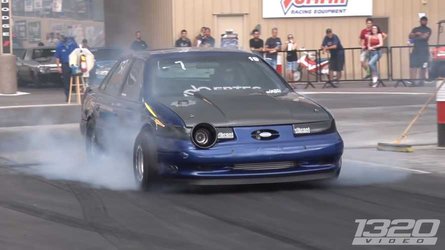 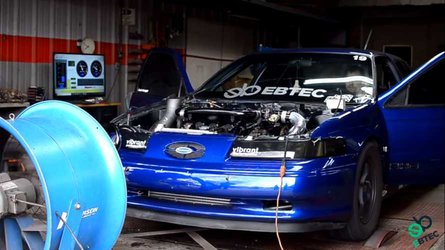 “The first day of the event I didn’t even make a pass, as we were struggling with electrical issues,” explained Wright. “Made a single pass the next day but the electrical gremlins were still there; engine was popping and breaking up. At 3:00 in the morning, I finally decided to drill a hole in the cylinder head and use a crankshaft sensor rewired as a camshaft sensor, and I knew that I only had one shot at it because if I messed up the hole, it would be messed up permanently. But it worked.”

That was only the first of many problems at the track. The first qualifying round saw residual ignition issues that required more attention. The car broke an axle on the second qualifying round, but it was misdiagnosed as something internal with the transmission. As such, the engine and transmission came out of the car and the trans was disassembled only to find nothing wrong. He installed his backup transmission to save some time and pressed on.

In the meantime, Coronavirus led to officials changing up the event which, among other things, significantly reduced the testing and qualifying rounds. As such, Wright went into eliminations with just those two passes under his belt and a case of nerves about snapping another axle. He went a bit too heavy on the clutch at the launch, and the result was a 9.8-second ET at 150 mph with the clutching slipping badly the entire way. It wasn’t enough to advance, and he was eliminated from the competition without getting the eight-second run he wanted.

“I caught wind of a private track rental that was taking place a day after TX2K20,” Wright said. “I paid to get in on the rental, and worked until around 4:00 in the morning pulling the clutch and replacing it. On the first pass the backup transmission wouldn’t shift into third and fourth, something was keeping it from going into gear. So I pulled the engine and trans out again, reassembled my old trans, put it all back together and had it back in the lane in 2.5 hours.”

The hard work and perseverance paid off. The first pass with everything back together was 9.0 at 169 mph. The second pass is featured above as well as in the video at the top of the article, courtesy of Wright’s tuner and owner of jazTuning, Jason Zuress. The 8.96 run had a trap speed of over 170 mph, but as Wright points out, the loose hood was effectively a parachute at those speeds until it flew off in dramatic fashion. In other words, the Blue Turd should be even faster.

“I’ve got some great sponsors that help, Ebtec, Vibrant Performance, SCE Gaskets, SHOSource, Ferrera Racing Components,” said Wright. “These are just a few of the places that have helped me with this. And now, this 8.95 should be enough to get me into the Import vs. Domestic World Cup Finals.”

So yeah. 8.9 at 170 mph with a loose hood and a manually shifted gearbox on a front-wheel-drive Taurus, after several days of frustration and hours upon hours of mechanical work. Wright points out that there are many people like him in the racing world working just as hard, but let’s be honest. Nobody else is doing this in an old Taurus. He has to make up the rules as he goes and nobody has parts waiting for him on the shelf.

To that, we simply offer our congratulations to Zach. We can’t wait to see the Blue Turd in action again.