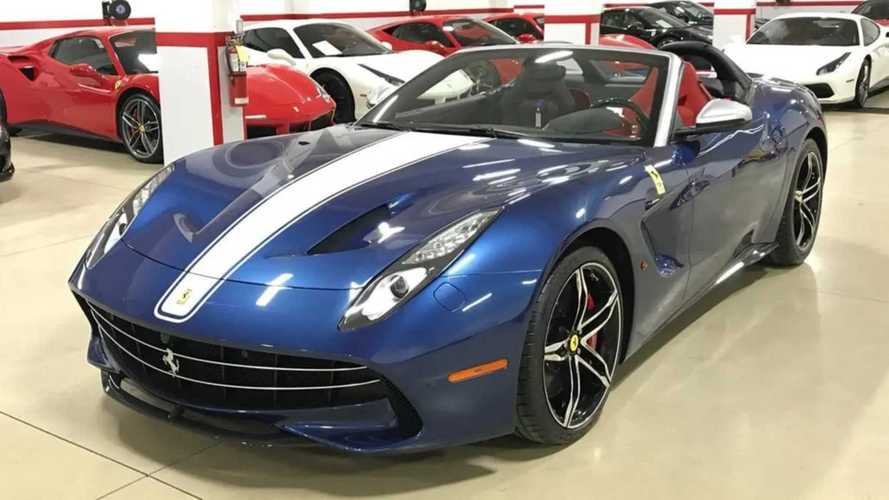 Ferrari made just 10 of these roadsters.

The Ferrari F60 America is a rare, roofless version of the F12 Berlinetta, and one of the ten examples is now for sale in Toronto, Canada, on James Edition. Unfortunately, we don't know the price because the cost is only available upon request from an interested buyer.

Ferrari unveiled the F60 in 2014 as a celebration of 60 years of selling vehicles in America, and the company delivered the first one at the Palm Beach Cavallino Classic in Florida in 2016. While the underpinnings come from the F12 Berlinetta, the designers make this model special by fitting a different hood, front fascia, and fenders. A roll hoop sits above each seat, and there's a revised rear deck. The look is supposed to evoke a 1967 Ferrari 275 GTS-4 NART.

The stylists split up the look of the interior be predominantly using red on the driver side and black on the passenger side. The setup creates an odd aesthetic by making half of the cabin appear vibrant but the other section looks somewhat staid.

The F60 Is A Special Stallion:

Power comes from a naturally aspirated 6.3-liter V12 that makes 730 horsepower (544 kilowatts) and 509 pound-feet (690 Newton-meters) of torque that runs through a seven-speed dual-clutch gearbox. This gets the F60 to 62 miles per hour (100 kilometers per hour) in 3.1 seconds. With no roof, the engine's 9,000-rpm redline should make for an impressive auditory experience, too.

This owner hasn't heard much of the engine because the F60 has only covered 110 miles (177 kilometers). As you'd expect with a Ferrari with some little mileage, the interior and exterior appear immaculate.

Ferrari sold each F60 for $2.5 million. While the owner isn't disclosing the asking price for this one, the F60's rarity suggests that the figure is probably in the neighborhood of the original cost.