The layout looks familiar from other current BMW models.

New spy photos provide the first uncamouflaged glimpse at the interior of the new 4 Series. The exterior still wears a camouflage wrap, though.

BMW doesn't want people getting a good look at the 4 Series' body, but a previously leaked photo indicates that the coupe wears the flaring nostrils from the Concept 4 (see below). The rest of the car's exterior doesn't appear to have similarly dramatic styling. In profile, the steeply raked windshield and sleek roof create a smooth shape. The rear has a pair of pipes that look slightly too small.

These shots provide a much better view of the cabin in both left- and right-hand drive layouts. The driver looks through a three-spoke steering wheel at a digital instrument cluster. The top of the center stack features a wide, trapezoid-shaped infotainment display. Below it, there are an array of switches and a pair of HVAC vents. A rotary dial on the console controls the tech.

BMW will allegedly only offer a manual gearbox on lower trims of the new 4 Series, and it reportedly won't be available at all in the United States. The automatic will be an eight-speed unit from ZF. Customers will be able to select between rear- and all-wheel-drive layouts. Short of the hardcore M4, the top model will be the M440i xDrive with 382 horsepower and 369 pound-feet (500 Newton-meters) of torque.

The Most Recent Spy Shots Of The New 4 Series: 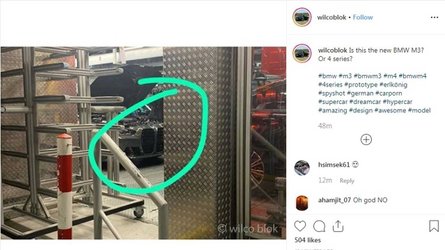 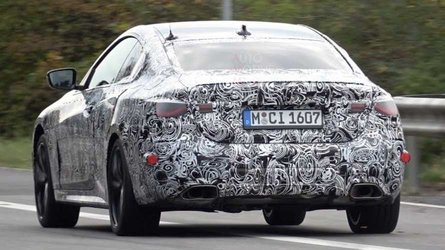 BMW will reportedly launch the 4 Series coupe in mid-2020. This will mean that sales will begin in the United States for the 2021 model year. There will also be the 4 Series Convertible, but it won't necessarily debut at the same time. The high-performance M4 and it's droptop variant will join the range later, too.