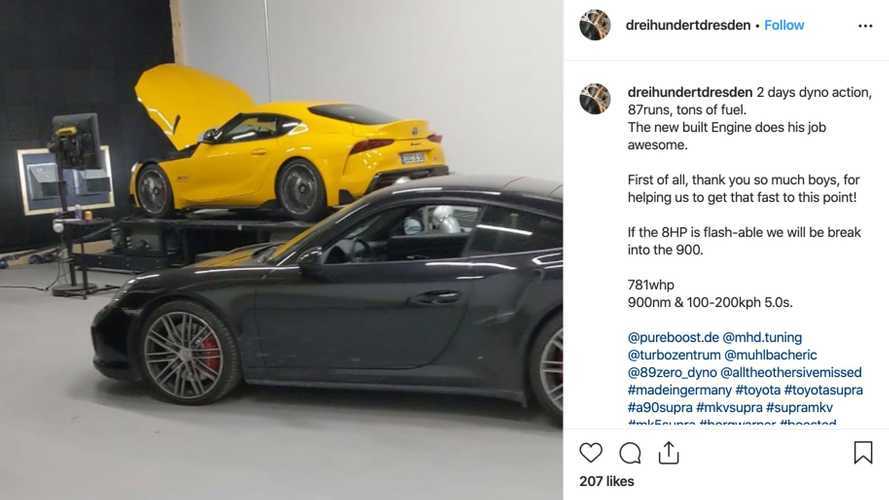 A lot of modifications are necessary to more than double the stock output.

Tuners are racing to figure out how much power the 2020 Toyota Supra's BMW-sourced 3.0-liter turbocharged inline-six engine can take. The Dreihundertdresden Instagram account is now showing off on the Supra Mkv forum a dyno run where the model makes 699 horsepower (521 kilowatts or 709 metric hp) at the wheels, in addition to 770 hp (574.4 kW or 781 metric hp) and 664 pound-feet (900.3 Newton-meters) at the crank.

This Supra has some major modifications to make so much power. The stock turbo is gone, and Borgwarner EFR 8474 replaces it. There's also extensive work to the engine internals and cylinder head. A custom tune makes the most of these tweaks. The mill uses methanol injection and runs on Aral's Ultimate 102-octane gasoline.

Dreihundertdresden believes there's more room to boost the engine's output. The problem is dealing with the transmission slipping with the current tune. The team needs to figure out a solution before really moving forward.

Dreihundertdresden isn't alone in working out how to get big gains from the Supra's engine. At this year's SEMA Show, Toyota is displaying the HyperBoost Edition that makes over 750 hp (559 kW). The builders don't provide extensive details about how they achieve this output but explains the powerplant has a new downpipe and titanium exhaust.

Papadakis Racing has been working on the challenge of pushing this powerplant to 1,000 horsepower (746 kilowatts). Like Dreihundertdresden engine, extensive modifications are necessary, including a ported cylinder head, upgraded valvetrain, custom head studs, and 3D-printed aluminum intake. Exhaust and turbo improvements are also among the changes.