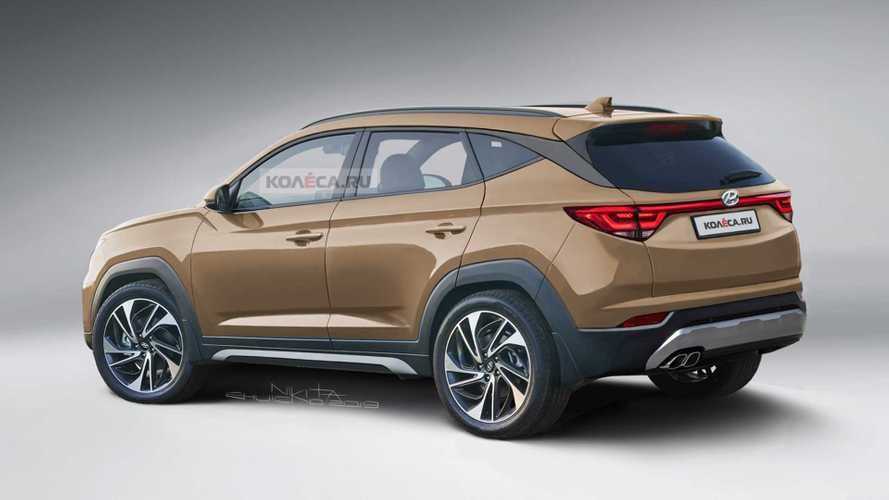 This is our best unofficial look yet at the new compact crossover.

Mainstream compact crossovers are far from being the most exciting vehicles in the world, but when Hyundai says the 2021 Tucson will make people “freak out” due to its design, it immediately earns our undivided attention. We’ve seen several batches of spy shots depicting the next generation while testing at the Nürburgring, and as it’s usually the case, the latest set was the most revealing.

Our spies captured a slightly less disguised prototype a few days ago, and it didn’t take long for the folks over at Kolesa.ru to revisit their original rendering of the new Tucson to match what the test vehicle was showing off. The most obvious changes have occurred at the back where the crossover has completely new taillights with a wide lightbar that covers the entire width of the tailgate to meet the clusters in a design move that’s becoming fairly popular.

The test vehicle did not have the redesigned rear lights as it only used a set of provisional taillights that will be gone on more evolved prototypes, but it did have openings in the rear fenders and the tailgate to practically reveal the actual shape of the taillights. One other change compared to the initial rendering is at the side profile where the updated digital design exercise sheds light on the short upper character line above the front wheel arches shaped like a boomerang.

Missing on the prototype but added to the new rendering is the piece of trim extending from the upper section of the C-pillar to the back where it gradually continues downwards to meet the bottom-left corner of the rear glass. To create the “floating roof” effect, it’s been given a dark gray look to match the window frame replacing the chrome finish of the original rendering.

The New Tucson Has Been Spied Obsessively:

Next-Gen Hyundai Tucson Spied On Video Cruising In The Mountains

The front fascia has remained pretty much the same, and you’ll observe the intricate pattern of the grille akin to the Grandmaster concept, flanked by a pair of unusually small LED headlights and a second cluster of lights positioned lower on the bumper. It’s a polarizing look and while it certainly won’t be to everyone’s liking, we’ll have to give credit to Hyundai for having the courage to completely transform the Tucson.

Even though the current generation of the South Korean crossover has only been around for about four years, its replacement is expected to arrive at some point in 2020.