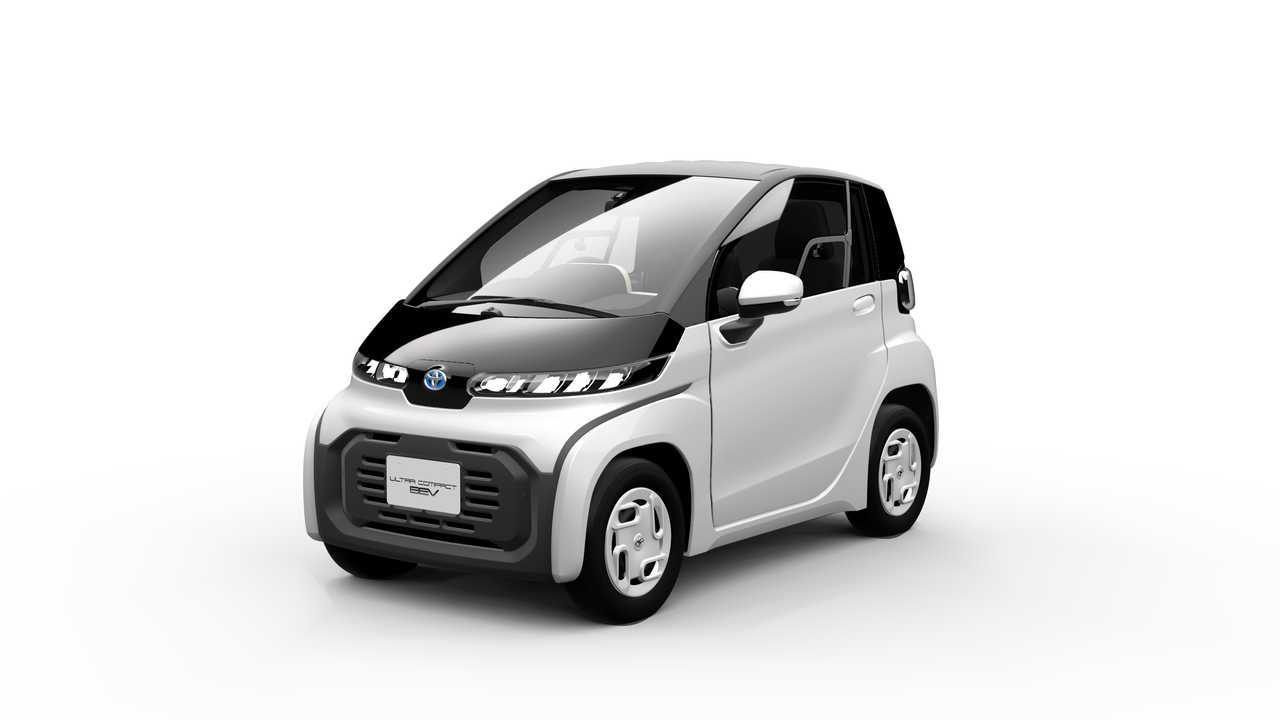 This adorable little box on wheels is more than just a concept to put on display at auto shows as Toyota says it’s a production-ready electric vehicle scheduled to go on sale in Japan by the end of 2020. Officially known as the “Ultra-Compact BEV,” the pint-sized car takes the shape of a city-oriented two-seater designed primarily for the elderly and newly licensed drivers. Toyota says the pint-sized EV has also been engineered to cater to those who do business in other cities where they need a simple and efficient way to get in touch with customers.

Toyota doesn’t say anything about the battery pack’s size, but we do know the stored energy will last for about 62 miles (100 kilometers). The Ultra-Compact BEV promises to offer an “extremely short turning radius” and top out at 37 mph (60 km/h), which is more than you’ll ever need in a crowded city.

There are actually two versions of the diminutive electric car, one envisioned for personal use and a black one for business purposes. The latter has been developed with a configurable interior depending on the selected mode (drive, office, relax), offering amenities like a fold-out table for your tablet to work while on the go.

Toyota Is Also Bringing These To Tokyo:

Toyota LQ Has Something Called The 'Yui' Artificial Intelligence Agent
⠀

Toyota will have the Ultra-Compact BEV on display next week at the Tokyo Motor Show alongside the even smaller 2013 i-ROAD and several walking-area battery electric vehicles of the seated and standing variety, plus a wheelchair-linked type.

Tokyo, Japan, October 17, 2019―Toyota Motor Corporation (Toyota) today announced that it will display its new, production-ready Ultra-compact BEV (battery electric vehicle) at the FUTURE EXPO special exhibition of the 2019 Tokyo Motor Show ahead of the vehicle's planned commercial launch in Japan in 2020. The next-generation mobility solution is designed to provide short-distance mobility while limiting impact on the environment.

"We want to create a mobility solution that can support Japan's ageing society and provide freedom of movement to people at all stages of life," said Akihiro Yanaka, Head of Development. "With the Ultra-compact BEV, we are proud to offer customers a vehicle that not only allows for greater autonomy, but also requires less space, creates less noise and limits environmental impact."

The ultra-compact, two-seater BEV is specifically designed to meet the daily mobility needs of customers who make regular, short-distance trips such as the elderly, newly licensed drivers, or business-people visiting local customers. It can be driven a range of approximately 100 km on a single charge, reach a maximum speed of 60 km/h, and features an extremely short turning radius.

Toyota is also pairing its planned 2020 launch of the Ultra-compact BEV with a new business model that aims to promote the wider adoption of battery electric vehicles in general. This includes examining every step of the battery's life, from manufacture through sale, resale or re-use, and recycling to maximize its value. In the near term, Toyota will focus on expanded leasing initiatives designed to recapture used batteries for evaluation and re-use as appropriate in pre-owned vehicles, as service parts, or even in non-automobile applications. Toyota is also developing peripheral services for battery electric vehicles such as recharging stations and insurance.

In addition, Toyota is exploring applications for its compact, short-distance BEVs beyond individual mobility. For example, the ultra-compact BEV in particular is well-suited to meet the mobility needs of municipalities working to create safe, unrestricted, and environmentally-friendly transportation options in urban or mountainous communities. To date, Toyota is already engaged with approximately 100 corporate and government partners to explore new transportation models that would include BEVs such as the Ultra-compact BEV, and is in ongoing discussions with others.
Toyota's Ultra-compact BEV will be exhibited at the FUTURE EXPO special exhibition of the 2019 Tokyo Motor Show from October 24 to November 4 along with the "Ultra-compact BEV Concept Model for Business", previously introduced on June 7, 2019.

In addition, ticketed Tokyo Motor Show attendees will be able to experience a range of Toyota's ultra-compact BEV mobility solutions at the 2019 Tokyo Motor Show OPEN ROAD exhibit. The Toyota i-ROAD and three different Walking Area BEVs will be available for test rides along the 1.5 km long path connecting Aomi and Ariake.

Specifications (based on internal measurements)