There wasn't actually a 356 Speedster in 1959. Emory Motorsport made it a reality.

Emory Motorsports specializes in creating amazing Porsche restomods, particularly using the 356 model as a starting point, and the company's latest project is the gorgeous 1959½ 356 Speedster.

This car didn't actually start as a 356 Speedster. It was originally a coupe, but a crash resulted in irreparable damage to the roof. From there, the company decided to convert the body into a speedster tribute. The original 356 Speedsters were available from 1954 to 1958.

"Porsche enthusiasts will notice that this build does not wear a 'Speedster' emblem. This is a nod to the car’s coupé beginnings and to the idea that we are celebrating the best of what this car still had when we found it," company boss Rod Emory said in the new model's announcement.

Rather than this 356's original 1.6-liter flat four-cylinder engine, the speedster now packs a major upgrade with a 2.4-liter powerplant producing 205 horsepower (153 kilowatts). It runs through a four-speed manual. While this might not sound like a lot of power by modern standards, this Speedster weighs just 1,850 pounds (839 kilograms). 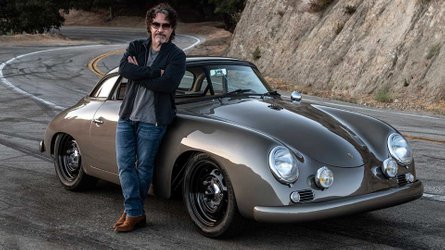 John Oates' Tuned Porsche 356 Won't Be His Next Maneater 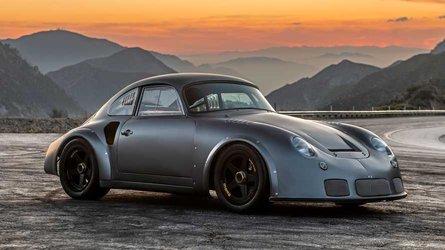 Since Emory's 356 has significantly more power than the original, the firm also overhauls the suspension. The setup is new independent at the rear, and there are adjustable Koni dampers. Custom brake rotors and calipers can handle the extra horsepower, too.

The Speedster looks fairly standard from the front, but there's now a hand-formed aluminum tonneau cover over the back. A single nacelle sits behind the driver's head. Emory shaves off the front hood handle, but the owner can still access the fuel filler through a hole in the panel. The body wears the color Aquamarine with a hand-painted Mobil Pegasus emblem on the driver side fender. It rides on a set of 15-inch wheels with a satin-black finish.

On the inside, occupants sit in seats that take styling inspiration from the original 356 Speedster, and they have Hydes Red leather upholstery.

NORTH HOLLYWOOD, CA (October 9, 2019) – Rod Emory has refined Emory Motorsports’ ‘Outlaw 356’ recipe by paying close attention to detail and by staying true to the principles of form and function. The secret ingredient (and their de facto mission statement) is the preservation of Porsche DNA, whatever the cost. All of the company’s four distinct “product lines” utilize this mandate, but differ according to the desired user experience. This unique 356 Speedster was built to experience the sun in the grandest Outlaw tradition.

“Each 356 that we put back on the road is a piece of Porsche history, and we work very hard to preserve that creative spark,” comments Rod Emory of Emory Motorsports. “The best part of my work is bringing new life to cars that might otherwise be destined for the junkyard.” The donor car for this particular project is a case in point: a 356 coupe whose roof was seriously compromised in an accident. Because the roof was not repairable, It provided Emory Motorsports a superb canvas for developing a truly one-of-a-kind 356 Outlaw that echoes everything enthusiasts have come to adore about the classic Speedsters of the era.”

While Emory Motorsports encourages the preservation of ‘survivor’ Porsches, ones that have been carefully looked after, Rod also enjoys bringing a variety of deserving 356 basketcases back to life in brilliant fashion. This 1959½ “Transitional” Speedster succinctly illustrates this concept.

Porsche enthusiasts know that the ‘Speedster’ model was made between the years of 1954-1958, being replaced by the Convertible D in 1959. When Rod Emory gained a client looking for an open car concept, he knew that making a Speedster-like car from a coupe was entirely feasible. The perfect donor car came along and Emory Motorsports’ skilled team of artisans and fabricators set about fusing the ‘Outlaw’ and ‘Special’ design categories that Emory has championed for its clients through the years.

Because the 1956-61 A and B coupe sans roof lends itself nicely to a “Speedster treatment,” Emory Motorsports hand formed a racing-inspired aluminum tonneau cover and headrest fairing, perfectly mated to the integral headrest hoop and cage. Other exterior touches include body-hugging bumpers and an unusual reverse-louvered deck lid. Typical bonnet modifications include deleting the handle and adding fuel-filler access for the custom 18-gallon tank. The period-correct  Aquamarine Metallic paint was applied by Little Shop of Kustoms in Desert Hot Springs, California. This Outlaw enjoys a race-bred finishing touch, the iconic hand-painted Mobil Pegasus on the front fenders.

The Outlaw Speedster’s chassis (and every Emory 356 Outlaw) was specially prepared to make maximum use of more than triple the standard power. Rear suspension was updated with modified 901-style IRS. Adjustable Koni dampers control the unsprung weight, and a pair of sway bars limit body roll during spirited cornering. The brakes were also upgraded to custom rotors and calipers that have 911-level stopping power. Power gets to the ground via 195/65R15 Dunlop SP 5000 tires on 15x5 Tecnomagnesio wheels, which are tastefully finished in satin-black powdercoat with brushed wheel hubs.

The Speedster aesthetic calls for a pristinely spartan interior which is clean and functional. Charcoal square-weave carpet gives the Hydes red leather upholstery additional pop. Speedster-style seats and dashboard seamlessly combine the old with the new. A 904-style triple gauge with speedo and tach provide a few extra data points to keep the driver informed while on the road. The interior is rounded out with black knobs and escutcheons, a Derrington steering wheel, and padded headrest.

Reflecting on the Transitional Speedster, Rod Emory continues, “Porsche enthusiasts will notice that this build does not wear a “Speedster” emblem. This is a nod to the car’s coupé beginnings and to the idea that we are celebrating the best of what this car still had when we found it. The “1959½” designation also signifies how this car straddles model years and body styles. This Outlaw 356 illustrates just some of what is possible with our talented crew here at Emory Motorsports and the result is bringing new life to a car that would have been lost to history.”

For more information on Emory Motorsports, please call 971.241.7017 or visit EmoryMotorsports.com or @rodemory on Instagram.

Founded in 1996 by Amy and Rod Emory, Emory Motorsports initially provided turnkey prep, repairs, and logistics for vintage racers. When Rod Emory began doing custom builds, the company eventually evolved into one of the world’s leading resources for Porsche 356 customization and restoration.

Rod applied his grandfather’s sheet-metal fabrication skills and dad’s Porsche obsession and design sensibility to the 356 models. Porsche purists labeled the Emorys as ‘Outlaws’ when they dared attempt to enter shows in the 1990s with subtly modified cars that combined OE parts from different models. The Emorys happily became champions of the Porsche Outlaw movement. Since then, Emory Motorsports has stunningly rejuvenated more than 180 Porsche 356s and a few early 911s. The company also meticulously restored what is now regarded as the most historically significant Porsche ever, a 356 SL Gmund that took a class victory at the 1951 24 Hours of Le Mans–Porsche’s first international race win.